BAT (Basic Attention Coin) started as a coin in 2017 while the company was formed in 2015 by very well-known names in the industry. The white paper came out on January 7, 2018 when BAT was trading at $0.75 and it quickly surged to $1.08 on my platform, although the print high from back then is $1.80 in certain platforms. Although it wouldn’t matter too much, apart from showing a record high which could be the target for some time, especially as BAT is heading higher and trading well above $1 after surging in the middle of March, at a time when the broader crypto market is consolidating off the highs.

BAT is different from most of the cryptocurrencies, which act as means of payment as their primary objective. Although the crypto market acquired the status of safe havens since the breakout of the coronavirus, BAT hasn’t really benefited from it. The surge in BAT only started in February 2021, while other digital currencies have been surging since November 2020. The reason for this is that BAT is not really intended to act as a means of payment in everyday life or for wealth transfer, like most cryptos. BAT was created to be exchanged/used on the Brave web browser between advertisers, publishers and users, which we will explain in further detail below.

Recent Changes in the BAT Price

BAT or the Basic Attention Token is the native digital coin of the Brave web browser, which I downloaded recently and is built on top of Ethereum network. It was created by Brian Bondy and Brendan Eich, who is the co-founder of Mozilla, Firefox and JavaScript. The aim was to improve the fairness in distributing the advertisement generated cash above all, but also to improve the efficiency and security of digital advertising through the use of block-chain technology.

Basically, BAT tracks the time for web browsing and web-based advertising, making online adverts more specific for the user, as well as sharing some of the profit generated on the site. It tracks the time media consumers spend, as well as attention on websites using the Brave web browser. It has attracted some attention recently, such as from the Digital Currency Group-backed Grayscale Investments, which formed the Grayscale Basic Attention Token trust. That was one of the reasons for the jump in the BAT price over the last few days, increasing the market value to $1.857 billion and nearly doubling in price, as it surged from $ 0.73 to $ 1.42.

BAT Token Price Prediction for the Next 5 Years

As we mentioned above, the BAT token is native to the Brave browser, so in order to understand BAT we need to understand Brave first. Brave came as the need increased for a browser which had privacy as its main goal, designed to block trackers, invasive cookies, and malware, as well as be an open-sourced browser. The ability to inflict damage from viruses, robot programmes, malware, etc has surged enormously and the traditional browsers or platforms have suffered from credibility issues. Besides that, large platforms like Facebook, Google, etc have reduced the price of information while at the same time taking a nice cut of revenues coming from advertising themselves, which has reduced the advertisement revenues for publishers.

As a result, the need for a browser such as Brave arose and in January 2016 Brave Software launched the first version of the Brave browser. It had an ad-blocking feature, and the company had plans for a privacy-respecting advertisement-feature and a program to share the generated revenue. The browser used to run on an Electron fork called Muon until 2018, but then moved to Chromium, to ease their maintenance issues according to them. Brave launched its version 1.0 in November 2019 and accounts for around 25 million active users. It has also incorporated Tor in its browser, which helps users and their online information remain anonymous. It is a free and open source software and it directs the internet traffic through a worldwide, volunteer overlay network to hide a user’s information and location.

The initial coin offering ICO of BAT took place on May 31 2017 and 1,000,000,000 BAT were sold in less than a minute, which totaled 156,250 Ethereum or $35 million at the time. BAT (Basic Attention Token) is an open-source and decentralized advert exchange platform, which is based on the Ethereum network. Brave Software International SEZC held 500,000,000 BAT itself and it distributed another 300,000 BAT to new users. The name of the token itself tells the story; BAT and Brave track the attention of the users which is recorded only on the user’s device (PC, Smartphone), unlike other browsers which send it to the company’s database and use it, for selling or any other thing. BAT is meant for exchange between users of Brave, advertisers and publishers as well, and to hold privacy sacred.

Big tech like Google and Facebook take a significant part of the revenue from publishers and advertisers, while giving nothing to the user. At the same time, they drive the price of information down due to the monopolized system, which doesn’t benefit publishers. BAT’s objective is for users to experience fewer and more well-tailored adverts to their interests while at the same time not giving up their data privacy rights. This way it helps advertisers target their audiences better and publishers to earn more, while users can also earn BAT coins based on how long they use the Brave platform and particularly by the ads that they chose to see. You will have to register to receive the BAT tokens. I have earned 0.1 Bat so far for the half day that I have been registered on the Brave browser and I think I might stay, since they are accumulating and the BAT has taken off at last.

BAT Catching Up Late With the Crypto Market Sentiment

BAT coin is different from the majority of cryptocurrencies. While the large part of digital currencies can be used to buy a wide variety of items in many shops and retailers, with the list still growing, BAT can only be used in the Brave browser. Although it is traded over global or regional cryptocurrency exchanges. BAT is not really a cryptocurrency right now, although it might turn into one later considering how fast this market is evolving. But, at the moment it is more of a utility token which can be used as a unit of account between advertisers, publishers, and users in a new, blockchain digital advertising and services platform.

So, BAT normally doesn’t behave like other cryptos, because the performance and adaptation/usage depends on the Brave users. The more people use Brave, the more the demand for it increases. Although, it is not totally out of the crypto market bubble, which picked it up in December 2017 and again in this latest crypto surge. But, BAT token lost most of the bullish move in the crypto market during the Q4 of 2020. It only started turning bullish in February this year when it jumped from around $0.30 to above $0.70. The second surge came by the middle of March as the BAT price increased from around $ 0.70 to $ 1.50, currently trading above $1. The latest surge came after some big name in the industry decided to adopt the BAT coin, which we will cover in the section below.

The BAT token is a new concept, but so were cryptocurrencies when Bitcoin came out. Besides that, this is a really interesting concept. Brave in itself is interesting as a platform, considering that it keeps your details and history in your PC only, which means high privacy. But considering that BAT could only be used in this browser, it was a little bit difficult to persuade the public. But, BAT became available for cashing out in October 2019, which has made it more interesting for a larger audience. Besides that, BAT is being adopted by some large names in the crypto world, as we mentioned above. The digital currency group Grayscale Investments has launched five new digital currency investment trusts, one of which was the Grayscale Basic Attention Token trust. The growing demand from institutional and individual investors has made cryptos more attractive and one of the main markets now. Also, BAT is now also available on the Binance Smart Chain as wrapped BAT. Xiaoguang Zhang, the Binance Smart Chain Ecosystem Coordinator said, “With this strategic integration between the Brave browser and Binance Smart Chain, we will introduce seamless UX together for crypto users to access DeFi and DApps in BSC and other blockchains, which will dramatically inspire mass adoption and inclusive finance“. Brendan Eich, the CEO and co-founder of Brave also added, “our hope is that BAT and Brave will take crypto mainstream and to make DeFi user-friendly for the mass market. With wrapped BAT now available on BSC, we believe this is achievable. We are especially excited by the low transaction fees and scalability of Binance Smart Chain and how that enables us to build scalable and seamless DeFi applications for Brave users,”

The BAT token started life at a really great time for cryptocurrencies in late 2017, as this new market was attracting broader attention from the public for the first time. BAT was launched at $0.10, which turned out to be the bottom level for this digital currency for years to come. It benefited from the bullish momentum in cryptocurrencies, joining it right away as it started and increasing to 1.0880, meaning an almost 11 times appreciation. Looking at the monthly BAT coin chart, we see that the price was trading in a range for a couple of years, after it retreated down with the rest of the digital currency market in early 2018. Although, the area around $0.10 which was the starting level turned into support as we mentioned above and it held well until the bullish momentum in cryptos resumed again in H2 of 2020, which for BAT came later in February of 2021. The 20 SMA (gray) also helped in providing support in 2019 and in late 2020, before the bullish momentum started. 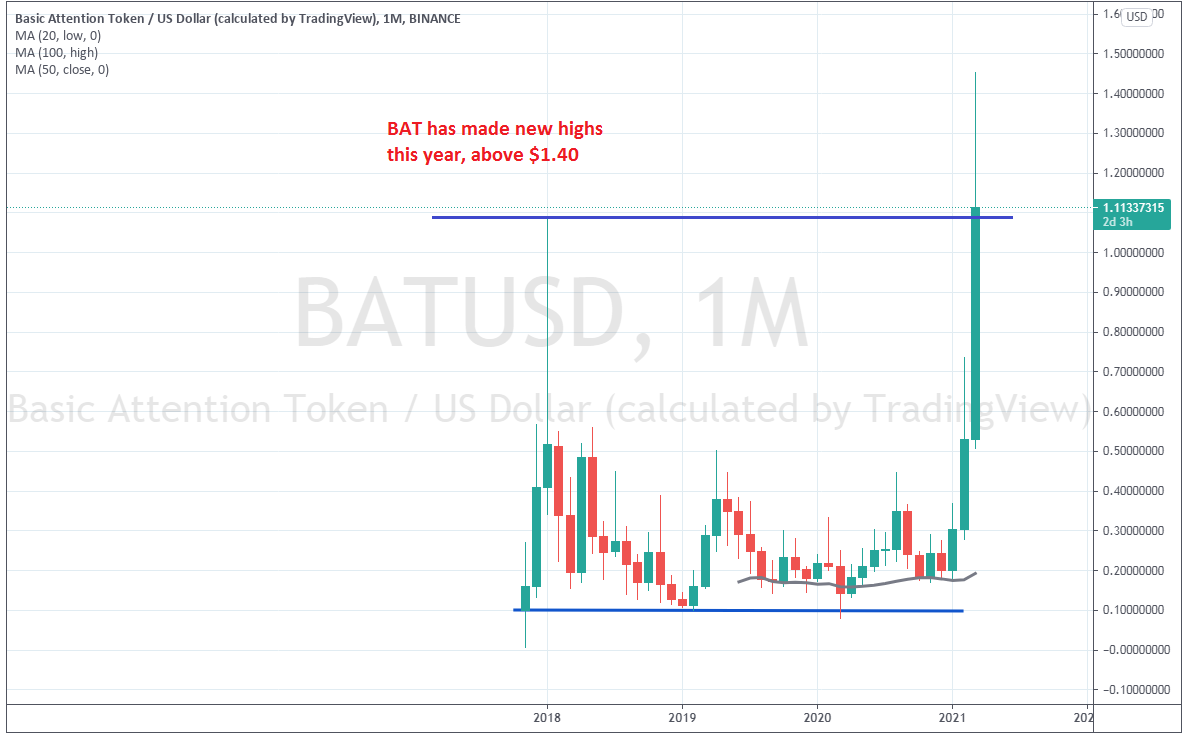 On the weekly chart, we can see three moving averages but they haven’t acted as anything, since BAT has ignored them. Since the surge in late 2017 and the following reversal, the highs were getting lower for this digital currency after every attempt to resume the bullish momentum. But at least the support at $0.10 held and eventually BAT joined the rest of the market in this amazing bullish run that we have seen in recent months. On the first day of February BAT was trading at around $0.26, and now with the help of the Grayscale trust BAT token finds itself trading about $ 1, reaching $ 1.42 earlier. 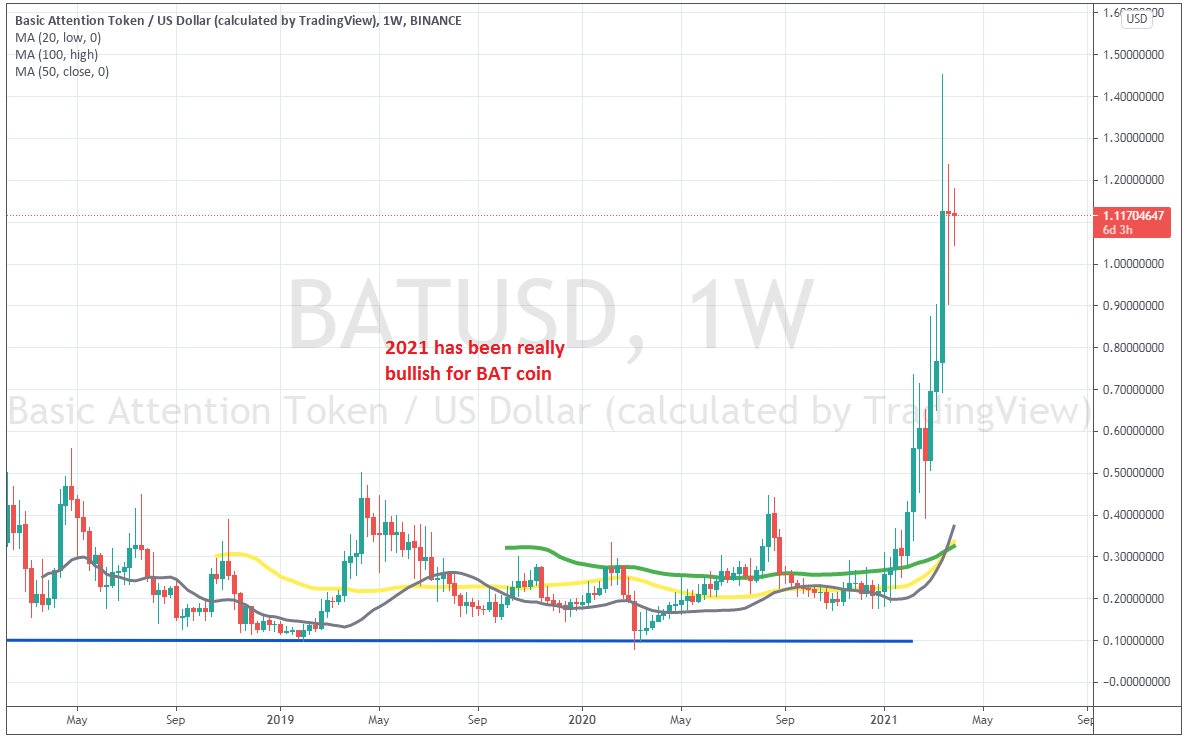 MAs can’t keep up with BAT on the weekly chart

On the daily chart, moving averages turned into support when the price was bullish and into resistance when the price turned bearish, as BAT traded sideways for most of the last three years, until the surge started in February. The 20 SMA (gray) turned into support and has been acting as such, until the latest surge after the Grayscale announcement. We saw a retreat in the last week of February, but the retrace ended above the 50 SMA (yellow) and now the price has surged again, trading above $ 1.20.

The retrace down seems to be over