The cryptocurrency, Dash, which started as a fork of Bitcoin in 2014, called XCoin, Darkcoin and finally Dash, surged more than $ 1,500 higher in 2017 as did all cryptocurrencies, led by Bitcoin, having started that year at around $ 10 and rising above $ 1,600, as the gold rush for digital currencies reached its peak. But, the gold rush ended as soon as 2018 started, and since then, the price of the DASH/USD has been declining, and it is now facing the long-term support zone at around $ 37 to $ 38.

The technical picture doesn’t look promising for Dash bulls; the highs have been getting lower and the technical indicators are providing resistance on higher time-frame charts. One of the most bearish signs is the fact that, while other major cryptocurrencies like Bitcoin and Ethereum have been increasing since March, Dash has been stagnant, and sellers tested the downside in September. This leaves us with a bearish bias for Dash.

Recent Changes in the Dash Price

So, the price action and the  [[DAS]]  charts point down, and the fundamentals are not very promising either. The Dash team said in October that Dash should not be seen as a privacy currency, which is in stark contrast to what Dash stood for in the beginning. That didn’t have a major impact though, although the pressure to the downside still remains.

So, despite Dash partnering with Secure Digital, in order to offer trading facilities over their OTC desk, making some further improvements and the crypto market increasing since March, buyers are not showing much confidence in this altcoin, which doesn’t indicate a bright future as things stand right now.

Dash Price Prediction for the Next 5 Years

There have been both positive and negative developments for Dash, although markets haven’t been too concentrated on fundamentals. As mentioned above, Dash has been considered as an anonymity-focused cryptocurrency, together with Monero and ZCash, but the Dash team threw that all away at the beginning of October. Fernando Gutierrez, CMO of the Dash Core Group, made the following statement on the Cointelegraph when asked if Dash should retain its privacy status:

“No, Dash is a payments cryptocurrency, with a strong focus on usability, which includes speed, cost, ease of use and user protection through optional privacy.”

That doesn’t bode well with the safety status it once had, but it appears that Dash officials are shifting it from a safe/anonymous cryptocurrency to an easier one, with which one can make transactions. They have entered into a new liquidity partnership with the Secure Digital Markets. SDM is regulated by FINTRAC in Canada, and it is a globally focused digital asset trading platform for institutions. SDM has completed over $ 2 billion in Over-the-Counter (OTC) digital asset transfers. With this new partnership, SDM will help institutional investors to buy, sell and trade Dash through the Secure Digit Markets OTC desk.

Pasta, one of the Dash Core Group’s developers, explained the development of Dash Core v0.16.0.1, which is ready for deployment by node operators. These improvements will be mandatory for all Dash masternodes and miners, and it includes confirmation methods for the appropriate masternode holder software and higher levels of anonymity when using PrivateSend and wallet interface enhancements. Dash has also partnered with Taurus.io, which is a Mexican cryptocurrency exchange, to release the first crypto Visa debit card in Latin America, but as we said, this has no impact on the price action.

Technical Analysis – Will MAs Push the DASH/USD Below the Support?

As the monthly chart at the top of this article shows, the DASH/USD surged more than 15,000% in 2017, from around $10 to $1,570. But the surge ended with that year, and in 2018, the crypto market crashed, pulling Dash down with it. The DASH/USD lost almost all of its gains in 2018, but a base formed at around $37 to 38. Apart from the spike in December last year, highs continue to get lower, and the 20 SMA (gray) is providing resistance on the monthly chart. It has been pierced a couple of times, but it hasn’t been broken, since we don’t see any candlesticks that have closed above it. So, the 20 SMA is keeping pressure to the downside for the DASH/USD. 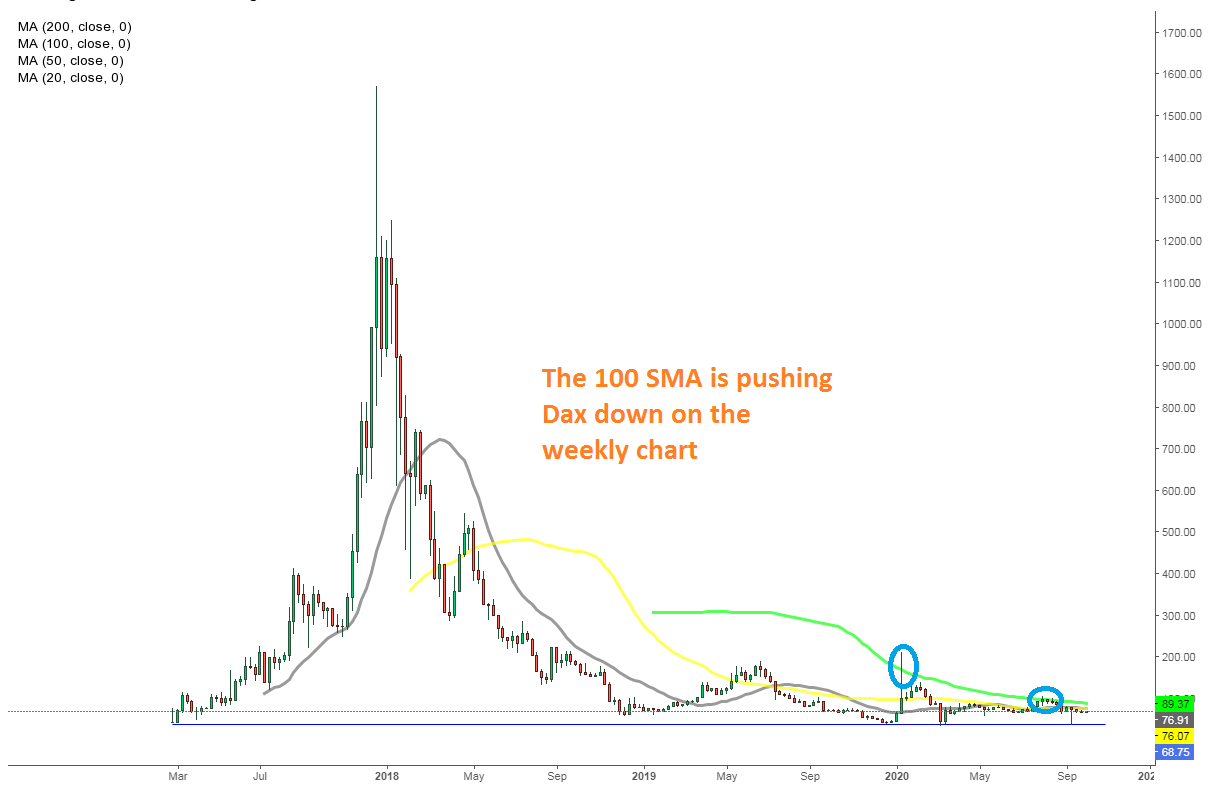 The range is getting narrower for Dash

On the weekly time-frame chart, the 20 SMA was providing support during the bullish move, before 2018. But that moving average was broken after the big reversal in February 2018, and the price for the DASH/USD has remained below all moving averages since then. Now, the 100 SMA (green) remains the ultimate resistance on the weekly chart. It rejected the price in July/August and reversed Dash lower. The support at $ 37 held again this time, but the pressure remains to the downside, so we don’t think that it will last for too long, since Dash hasn’t benefited from the bullish momentum in the crypto markets of the last several months.