The United States dollar/Swiss franc currency pair denotes the exchange rate between the U.S. dollar and the Swiss franc and expresses it as the number of Swiss francs needed to buy one U.S. dollar.

For example, if the USD/CHF exchange rate is 0.95000, it means you need 0.95 Swiss francs to buy one U.S. dollar. In this pair, the U.S. dollar is the base currency, and the Swiss franc is the quote currency.

With a large daily turnover of about $180 billion, the USD/CHF is the seventh most traded currency pair in the world. The total daily turnover in the forex market is approximately $5.1 trillion, which means the USD/CHF represents about 3.5 percent of this colossal amount.

History of the Swiss Franc

The Swiss franc was officially established as the nationally recognized Swiss currency on May 7, 1850, when the Swiss Federal Constitution passed the Federal Coinage Act which gave the Swiss federal government the right to mint this currency. 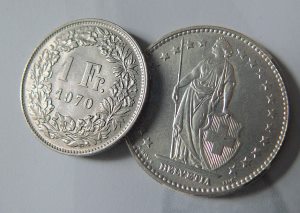 The first Swiss banknotes were printed in 1907.

The U.S. dollar has been the United States’ standard monetary unit for more than 200 years. It has also been the world’s official reserve currency since the Bretton Woods Agreement came into force in 1944.

How the USD/CHF is Traded

Pip Value of the USD/CHF

In the forex world, the pip is an abbreviation of point in percentage. The minimum change in the price of a currency pair is known as Pip. It’s the fourth number following a decimal in most price quotes. A 1 pip change is a price movement of 0.0001.

To establish the pip value of the USD/CHF, we first need to consider what a pip is. If the USD/CHF is trading at 0.96500 and the exchange rate moves to 0.96510, it has moved one pip higher. The fourth digit after the decimal point is called a pip.

Let’s say the franc depreciates against the U.S. dollar until the USD/CHF trades at 1.93000. The pip value would then be half of what it is at the current exchange rate of 0.96500.

For a really small investor, a 1K lot sounds like a really big trade size. After all, how would someone with a $500 account be able to open a 1000 dollar position?

Well, the great thing about trading forex is that retail brokers allow you to trade with leverage. The leverage offered by retail forex brokers generally vary between 1:100 and 1:1000.

Some brokers offer ridiculously high leverage of 1:2000, 1:3000, and even 1:5000. Of course, some countries regulate the amount of leverage you can use as a retail forex trader, like the United States which allows a maximum leverage of 1:50.

Without using leverage, this would not be possible because a 1K lot of the USD/CHF is worth $1000. 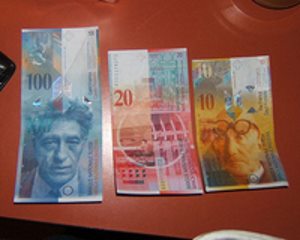 Here at FXLeaders, we go the extra mile to offer traders the best forex signals possible. In 2019 alone, we bagged a phenomenal 2,118 pips! A certain amount of these gains came from our USD/CHF signals.

Because of the dynamic pip value of this pair, we can’t use the current pip value at any point in time to accurately project take profit or stop loss values for trades.

We can use this as an estimate, though, especially if the target is relatively small. But when we need to make exact calculations, we need to calculate the profit or loss in Swiss franc and convert this amount to U.S. dollars at the new USD/CHF exchange rate, like in the example above.

Instruments Correlated to the USD/CHF

Of the major currency pairs, the USD/JPY and the EUR/USD bear the highest correlation to the USD/CHF.

Although gold is not a currency by definition, it is often viewed and traded in the same way as currencies, especially in the modern electronic trading environment.

The Swiss franc is highly correlated to gold, and hence, the USD/CHF and XAU/USD (gold/United States dollar) have a remarkable one-year inverse correlation of -0.82). When the USD/CHF pair moves higher, gold tends to move lower.

For an interesting guide on how to trade gold, simply follow the following link: Gold Signals – A Beginner’s Guide, Part 1.

Here are links to similar guides on how to trade the EUR/USD and the USD/JPY:

Both the Swiss franc and gold are considered to be safe-haven assets.

It’s important to note, however, that the Swiss franc’s correlation to gold doesn’t remain constant and can change substantially.

At 0.69, the Japanese Nikkei 225 has the highest 1-year correlation to the USD/CHF at the moment (of the major global equity indices).

Of the many economic events that influence the USD/CHF, there are a few that can cause substantial volatility in this exchange rate.

Monetary policy is certainly one of the most important drivers of the USD/CHF. The Federal Reserve of the United States and the Swiss National Bank are in charge of their countries’ monetary policies.

When the FED and the SNB comment or take action in regards to interest rates, quantitative easing, inflation, and economic growth forecasts, it often causes violent moves in the USD/CHF exchange rate.

The SNB caused a major flash crash in the USD/CHF exchange rate (and other CHF pairs) on 15 January, 2015.

Before this, the SNB intervened aggressively in the EUR/CHF exchange rate and pinned the Swiss franc to the Euro in an effort to prevent the Swiss franc from strengthening against the Euro.

On the date mentioned above, the SNB announced that it would no longer maintain the ‘floor’ or the ‘peg’ in the EUR/CHF exchange rate.

This caused a massive selloff in the EUR/CHF which affected all Swiss franc currency pairs. The USD/CHF was no exception and dropped more than 2000 pips in a couple of minutes.

Economic indicators are used to analyze how well a country’s economy is performing, and to predict future economic growth.

Although economic news out of Switzerland can move the USD/CHF exchange rate considerably, the most market-moving economic news releases typically emanate from the United States.

If you’re looking for a breakthrough in your trading career, I’d like to invite you to visit our forex signals page today. As I mentioned earlier, we made a remarkable 2,118 in 2019 alone! This is really impressive considering how tough the trading conditions were in 2019. You can check out our 2019 Signals Report here.