Some More Buy And Sell Orders

Yesterday we presented you guys with buy and sell orders in GBP/USD and EUR/USD, or as we like to call them support and resistance numbers. Today we will take a look at these levels in USD/JPY and AUD/USD. Then, we can use these levels for entry and exit points after intraday trends have been established in major forex pairs.

USD/JPY – This pair has made several attempts to break below the 100 support level but after failing for the hundredth time last week, the price reversed and it´s been a one-way traffic this week. The 20 simple moving average (SMA) in the H1 forex chart has been providing solid support all week so that´s the first support level, which at the moment stands at 103.50. 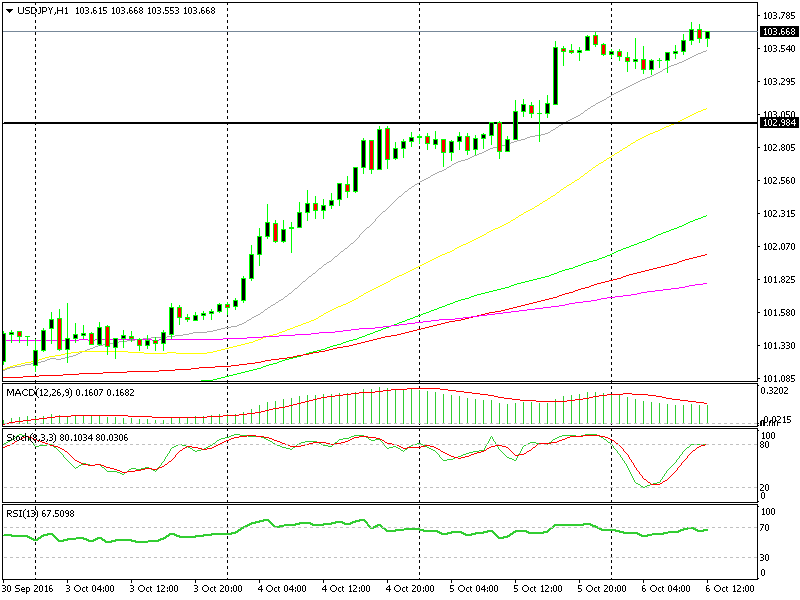 If the price manages to break below it which would be the first time this week, then today´s low at 103.30 will be the next support level. The 50 SMA in yellow awaits at 103.10 but if the price doesn´t move down in the next few hours then the SMA will have reached  the 103.30 level which will add extra strength to this support level. Below there comes 103 of course which has been resistance before, 102.60-70 and 101.80.

AUD/USD – This pair has been in an uptrend during most of September, but after last week´s consolidation the price has declined all of this week, so I think it´s best to look at the resistance levels first. We can use these levels as entry points for sell orders in this pair during the pullbacks.

US Dollar Weak While Japanese Yen Makes Gains
5 days ago