The Swissy Is Being Stubborn – Technical Analysis

Yesterday we wrote in our last market update that the market sentiment was improving after the FBI closed Clinton's email case. We were getting ready to buy USD/CHF, since the safe haven currencies are the ones to suffer most when the sentiment is positive. 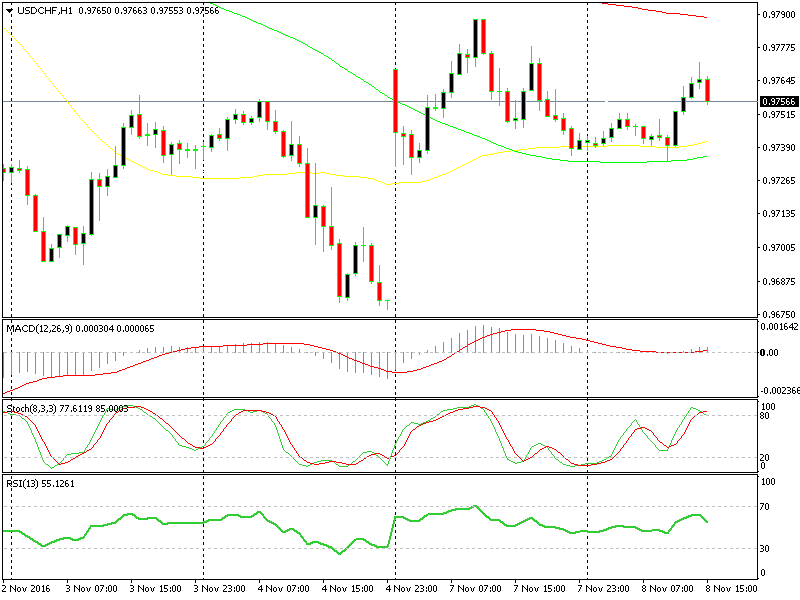 We decided to pull the trigger when the price retraced to the 100 simple moving average (100 SMA) in green. The 100 SMA is very close to the 50 SMA in yellow, as you can see in the H1 forex chart, so that added extra strength to this support level.

This forex pair managed to move around 40 pips higher after failing to break the support at 0.9730s, which was a good sign initially. But, since it reached 0.9770s, the price stalled and right now it looks like we might even see a retrace of the first retrace.

Both the Yen and the CHF are the ultimate safe haven currencies, but while the USD/JPY is nearly 200 pips higher from the Friday close, the Swissy is being stubborn. It only moved 100 pips higher after the risk appetite returned on Sunday evening when the market opened.

The pattern in most USD/CHF charts in the higher timeframes seem to go in our favor because the stochastic and RSI indicators are already oversold after last week´s heavy USD selling amid risk aversion. However, this failure to follow USD/JPY higher is worrisome; it raises questions whether last week´s downtrend is actually over. That said, the exit poll jitters haven´t started yet, so we might get a 200 move in either direction at any time today, so be ready guys.