Yesterday, the market traded calmy throughout the Asian and European trading sessions. Later in the New York session however, we saw a tornado of volatility which threw all the technical levels away. This is why we always prefer to trade with proper stop loss.

Our forex trading signals went well. The Gold trading signal closed at take profits. We got really lucky because we managed to close our crude oil trading signal manually in profit before it edged higher and dipped below our stop-loss area.

In the New York session, investors triggered a sell-off in the stock markets and jumped into the bullion market over the uncertainty caused by geopolitical tensions between the U.S and North Korea. Things went wrong when the United States chose to move a Navy strike group toward the Korean peninsula. The spokesman of North Korea remarked that they will defend their country by "a powerful force of arms".

EUR/USD – The Pair In Sideways Trends

Considering the geopolitical tensions around the globe, the EUR/USD currency pair is not very attractive these days. Recalling our weekly forecast report about EUR/USD, the pair is still trading as per our plan.

Looking at the fundamental side, we really don't have a major economic event to share but the low impact economic events remain in our favor. The German ZEW Economic Sentiment, which measures the sentiment of 275 institutional investors in regards to the outlook for the next six months in Germany, increased to the highest level since August 2015.

The Eurozone industrial production dropped by 0.3% in the month February which was lower than the expectated  0.1% gain. Moreover, the annual increase went up to 1.2% from 0.2% previously, although this was notably lower than the expected figure of 2.0%. We can say that fundamentals remained mixed and failed to give a direction to the EUR/USD. 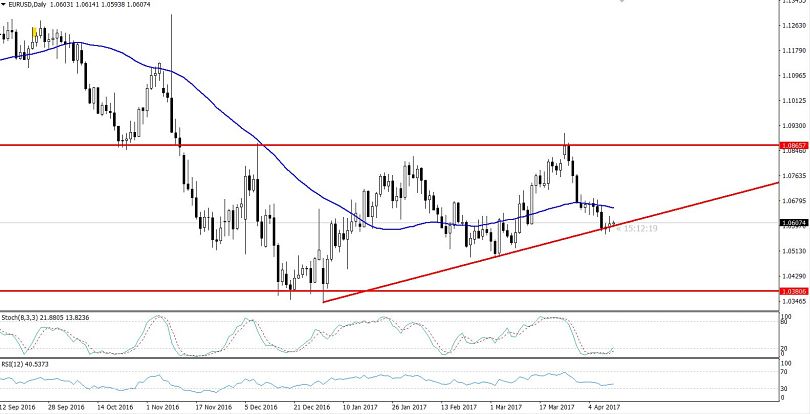 Looking at the 4 – hour chart, the pair is still holding below 50 periods EMA along with the RSI below 50. However, the neutral candles like doji and spinning tops are suggesting a change in investor's sentiment from bearish to bullish. This could be due to the bullish trendline in the EUR/USD which is extending support to the pair at $1.0550/70.

The Japanese Yen made massive gains aginst the U.S dollar as a result of war sentiments between the U.S and North Korea.  The USD/JPY sank strikingly lower to trade at $109.405 in the early Asian sessions.

Though the sudden drop in the pair came as surprise, according to the technicals the market is supposed to target $107.80 on the breakage of $110.110. 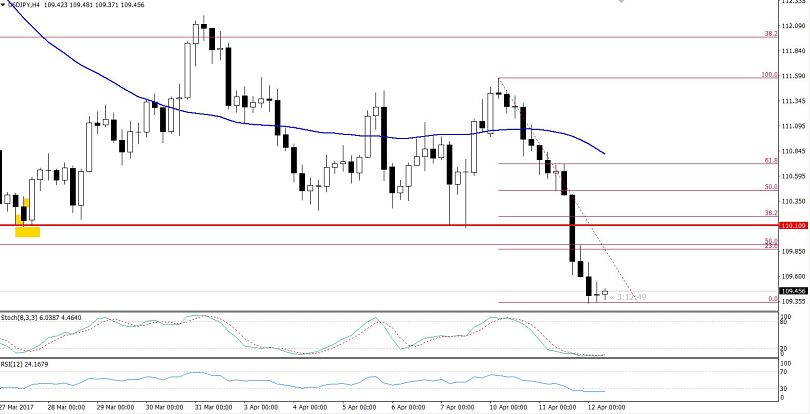 Technically, the USD/JPY has come out of the descending triangle pattern in the 1 – hour chart. The pair has also violated a strong double bottom support level of $110.10 and has opened more room for selling until $107.80.

Moreover,  the prices below 50 – periods moving average is signaling the pair's bearish bias. But, the leading indicator RSI (below 30) has entered the oversold trading zone.

Therefore, it's better to wait for a pullback until $109.850 and $110.200 Fibonacci retracement levels before we enter any additional selling.

Today we have a few major economic events on the table. The labor market figures from the U.K, the monetary policy decision from Canada and Trump's speech seem to be the most significant.

Keep following as we may have few trades today!