Yesterday evening, when I posted the last forex update, we already had three winning forex signals. The USD was closing another day at the highs, making it another great day for the Buck.

Our NZD/USD signal was edging closer to the take profit level too and this morning I see that we had another winning forex signal. We have been bullish on the USD during this time and it has been an easy ride. 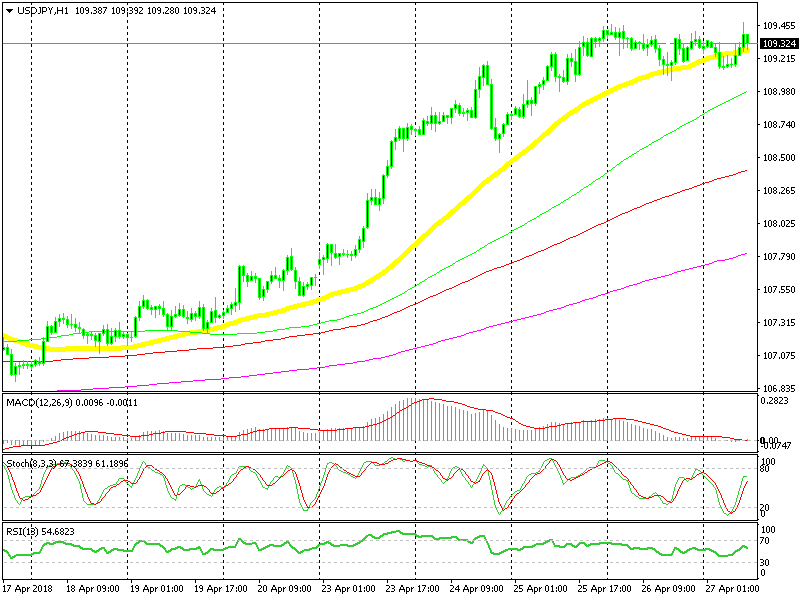 The uptrend remains strong in USD/JPY

EUR/USD was trading at 1.21 last night after it stopped sliding lower. I thought that a retrace was due during the night so I placed a pending sell order at 1.2155. That level was the last defense line of the major support area around 1.22.

Looking at the economic calendar, I see that it’s not helping matters either for other major currencies. Inflation and retail sales from Japan were disappointing once again although they weren’t negative. The housing starts figure, on the other hand, was terrible as the new house building declined by 8.3% year/year.

The economic data from Europe wasn’t good either. The French flash GDP growth was slashed in half, from 0.6% last month to just 0.3%. Consumer spending declined to just 0.1% from 2.5%, while inflation in Spain cooled off to 1.1% from 1.2%.

The president of the European Central Bank (ECB) Mario Draghi gave some warning comments yesterday, saying that the recovery has slowed in the Eurozone. Now we get the numbers and see that he was right. That makes the road smoother for the USD.