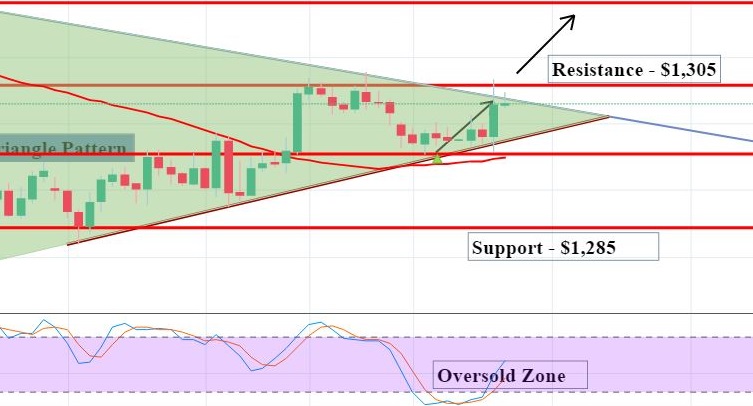 The yellow metal gold soared to $1,307 as the deepening political crisis in Italy began the second day of huge selling on European financial markets. However, it played in our favour to help us pocket +85 pips in DAX and +30 pips on gold. Who’s up for the next forex trading signal?

Recalling FX Leaders May 29 – Economic Events Brief, the U.S. economy is expected to release consumer confidence which is expected to be 128.0 in May, only slightly down from a strong 128.7 in April. The figure is already down from a 17-year high of 130.0 in the month of February.

Fellows, a divergence in data with two points can cause some nice fluctuations in the market. For instance, a drop in consumer confidence to 126 or a rise to 130 can get us some nice trading opportunities today.

On the 4- hour chart, gold has formed an asymmetric triangle pattern which is supporting the pair near $1,295 along with a resistance at $1,305. Considering the economic event releasing during the U.S. session, We can expect a breakout in gold and it can come out of the trading range of $1,295 – $1,305. The RSI and Stochastics are also coming out of the oversold zone.

It will be nice to trade the choppy markets, selling below $1,305 and buying above $1,295. On the release of the news, we can also expect to see a breakout. Good luck.