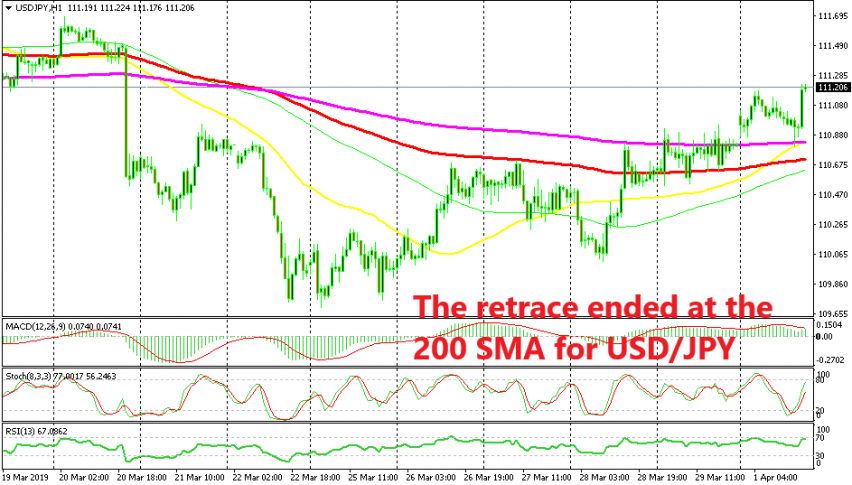 The 200 SMA Turns From Resistance into Support for USD/JPY

The previous resistance indicator has turned into support for USD/JPY

USD/JPY turned bullish last week as the sentiment started to improve in financial markets after turning quite negative in the previous week. As a result, this forex pair reversed higher last week and it climbed around 100 pips from the lows. But, the buyers found some decent resistance at moving averages as they pushed higher.

It was the 100 SMA (red) to provide resistance at the beginning of the week on the way up, but that moving average was eventually broken towards the end of the week. Then, as it usually happens, the 100 SA turned into support for this pair and the 200 SMA (purple) turned into resistance until the week closed.

This morning, we saw USD/JPY open with a bullish gap higher, most likely due to the turnaround in Chinese manufacturing, as the manufacturing PMI report showed an increase and an expansion last month, after having been in contraction for several months. The Caixin manufacturing report was positive also today.

As the sentiment improves, the safe havens get sold off, hence the bullish price action in USD/JPY today. We saw a retrace lower during the European session but the 200 SMA turned into support now. The price formed a doji candlestick and then jumped higher, which was a great setup for buyers. Now, the 200 SMA should be seen as a support indicator and a good place to go long from.