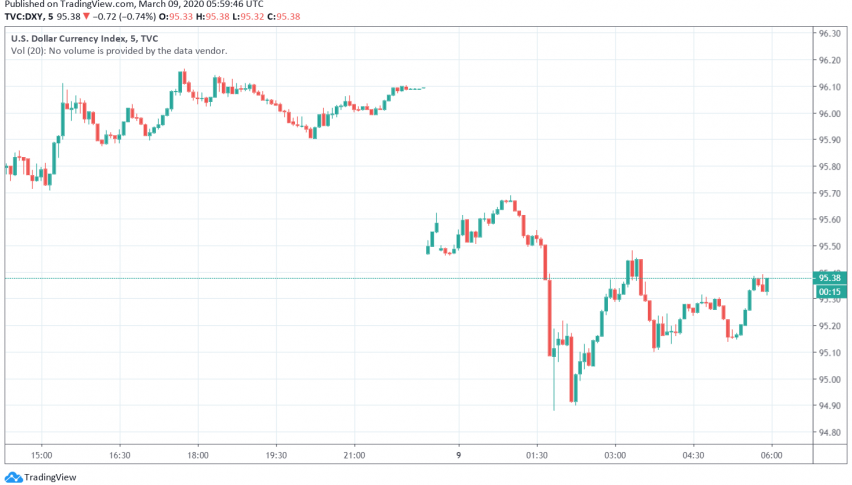 The US dollar has taken quite the hit and is trading weak at the beginning of a fresh trading week, as a result of the ‘flash crash’ seen in currency markets following Saudi Arabia’s unexpected decision to increase crude production. At the time of writing, the US dollar index is trading at around 95.38, having recovered slightly after falling below the 95 level for the first time since October 2018.

The weakness in the US dollar was driven by the 10-year US Treasury yields falling to a record low below 0.5%, to as low as 0.477%, even as stock markets and commodity currencies collapsed in reaction to Saudi Aramco’s announcement. This also drove market expectations for additional rate cuts higher, with CME’s FedWatch tool now anticipating an 84% likelihood of a 0.75% rate cut at this month’s FOMC meeting.

The US dollar could see further moves lower in the US session as Wall Street tumbles lower in reaction to this news later today. Asian equities already declined in reaction to crude oil prices falling by more than 25%.

Saudi Arabia decided to increase crude production and lower its oil selling price across all crude grades in response to Russia’s refusal to give in to OPEC+’s suggestion for further supply cuts. This is likely to weigh on non-OPEC oil producers, especially Russia and the US, even as other Middle East oil producers are expected to join Saudi Arabia and increase oil production in their respective regions.