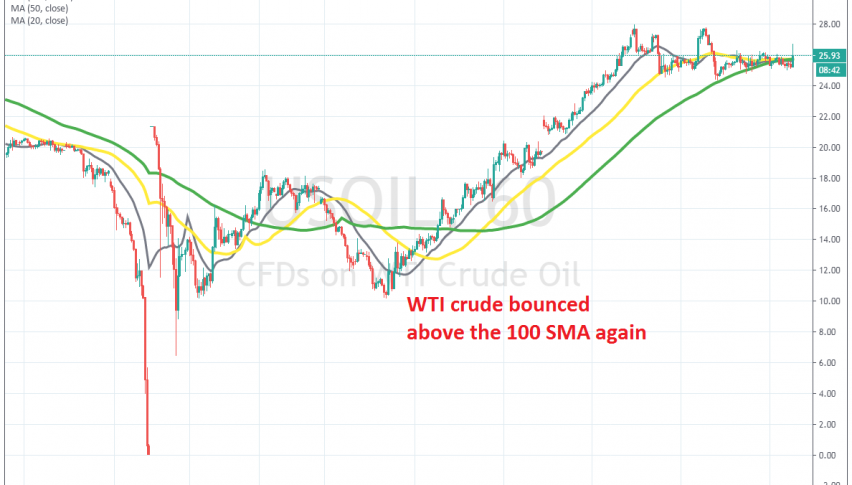 The Trend Has Turned Bullish for Crude Oil Now

Crude Oil is back up now

Crude Oil went through two major crashes in February and March. The first crash came after Russia refused to join OPEC+ in cutting production by 1.5 million barrels/day, sending US WTI crude from around $50 to below $20. The second crash came after the coronavirus pandemic broke out in Europe and the US, which sent US WTI below $0.

But, the big crash finally ended back on April 20 and the price has turned bullish since then. Oil came back from the dead, climbing above $0 again and breaking above moving averages on the H1 chart. These moving averages have now turned into support for Oil.

The 20 SMA (grey) was providing solid support during late April and early May, as the trend was pretty strong. But the strong bullish momentum ended above $28 and WTI crude retraced lower, but the 50 SMA provided support for some time. But towards of last week, the price slipped below the 50 SMA, although the 100 SMA (green) took its place. The price has been trading around that moving average since then and a while ago we saw a jump which took the price almost $2 higher.

That came after Saudi Arabia announced that it would cut Oil production voluntarily by an extra 1 million barrels/day. So, the momentum is still bullish in Crude Oil and as the world reopens, I think that the demand for Oil will increase. Although, it remains to be seen how many businesses have already bankrupted and how the recovery will be in the coming months or years for that matter.