Daily Brief, Oct 23 – Everything You Need to Know About Gold on Friday! - Forex News by FX Leaders 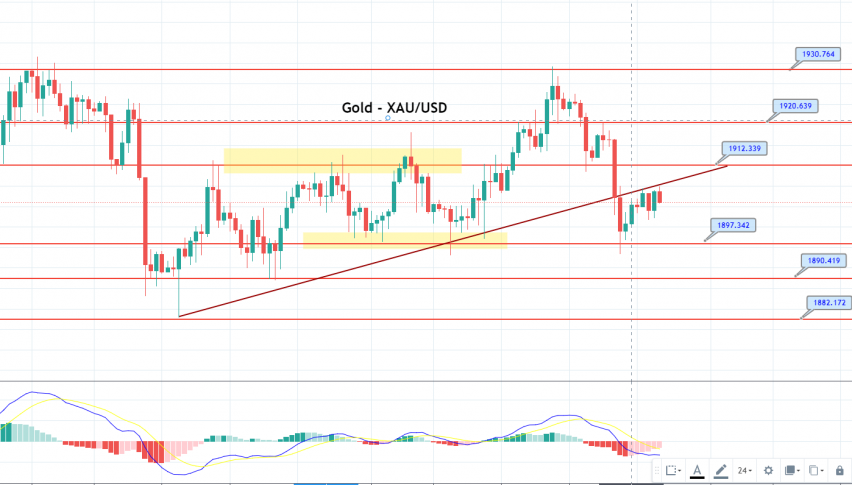 Daily Brief, Oct 23 – Everything You Need to Know About Gold on Friday!

Happy Friday traders,
The gold prices closed at 1,903.68, after placing a high of 1,926.01, and a low of 1,894.53. The gold prices remained low, showing a bearish trend the whole day on Thursday. After posting gains for three consecutive days, the gold prices dropped, losing all of the gains of the previous days, on the back of the strong US dollar. The greenback recovered from the lowest level in seven weeks, and despite hopes of an agreement before the US elections next month, the coronavirus fiscal relief talks between the Republicans and the Democrats continue to drag on.

In the previous three sessions, the gold prices gained almost 1.3%, on the hopes that a new stimulus package will be delivered before the election, which boosted the safe-haven demand for the yellow metal. On Thursday, gold settled 1.3% lower, and lost all of its previous gains as the US dollar rebounded.

The US Dollar Index, which measures the greenback against a basket of six currencies, rose by 0.4%, to 92.97, on Thursday. On Wednesday, the DXY fell to its lowest level in seven weeks, at 92.46, but recovered from that on the next day, due to a strong US dollar, despite the continued talks regarding the stimulus package.

However, hopes that the stimulus package would be approved any time soon faded on Thursday, when the negotiators stated that the White House and the Democratic-led Congress were far from reaching a deal. The talks continue, and it seems unlikely that a US stimulus package will be released ahead of the election.

In March, Congress approved a stimulus measure, by the name of Coronavirus Aid, Relief and Economic Security (CARES), to the tune of about $ 3 trillion, as paycheck protection for workers, loans and grants for businesses, and other personal aid for citizens and residents who qualify.

The follow-up to the initial CARES package has not yet been released, as the Democrats and the Republicans have been in a deadlock for several months, failing to reach a consensus over the size of the stimulus package. Some sectors have been hit hard by the pandemic, and need immediate aid, for example, the airline sector and small businesses, where people are at high risk of losing their jobs unless further aid is provided. It remains uncertain whether a package will be delivered before the US Presidential elections, in which Donald Trump faces Democrat Joe Biden. The faded hopes that the stimulus might be delivered ahead of the elections boosted the US dollar, ultimately dragging the gold prices below the $ 1,900 level on Thursday.