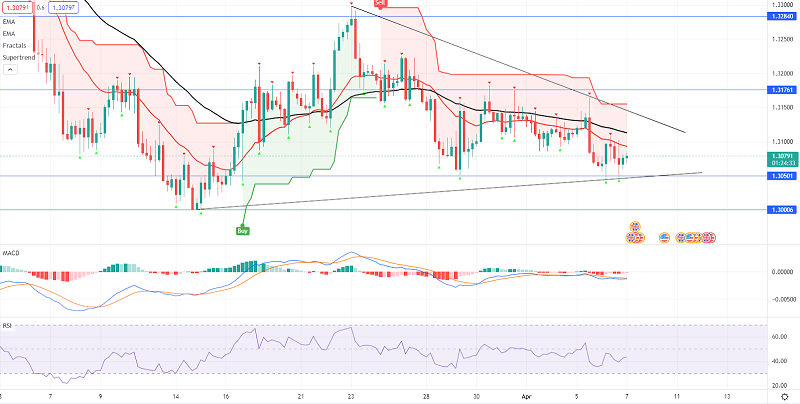 GBP/USD was the strongest currency immediately following the release of the Federal Open Market Committee minutes, rising to 1.3107 before falling to post-minutes lows of 1.3056 when the US dollar finally broke higher. Following the release of minutes in which Federal Reserve officials expressed concerns about inflation, the DXY, an index that measures the US dollar against a basket of six rival currencies, has reached its highest level for 2022 at 99.769. Members have finalized plans to reduce bond holdings as part of a concerted effort to contain rising prices.

The Fed plans to reduce its $9 trillion balance sheet to roughly $95 billion per month. Meanwhile, some market commentators have begun to speculate that the Bank of England may reconsider raising interest rates beyond May. The Bank of England anticipates that some labor market slack will emerge in the future. If this happens, wage inflation will be suppressed, and higher food and energy prices will slow demand for goods with elastic demand. This will reduce the need for further rate hikes.

On what has been a choppy trading day, the [[GBPUSD]] is trading slightly higher on the day (it closed yesterday at 1.3070 and is currently trading at 1.3076). The initial move in the GBPUSD was to the downside, building on yesterday’s down day, which saw a price break higher (above the 100 and 200-hour moving averages and a downward-sloping trend line), only to reverse sharply lower, aided by dollar buying on Brainard’s comments. Let’s take a look at the technical side for further insights.

The GBP/USD is consolidating in a narrow range of 1.3050. Failure to break through the 20-EMA will cause more pain for the sterling bulls. The RSI has fallen below 40.00, indicating no divergence and that the market is oversold. Significant offers for the cable will be made for a location below the symmetrical triangle.