THETA Price Prediction for 2021: Will the THETA/USD Violate the Choppy Session?

The cryptocurrency running on the blockchain of Theta named THETA token has been trending higher again in the market lately, after seeing a massive surge in its price during the first quarter of 2021. Since then, the cryptocurrency has made its mark among famous cryptocurrencies like Bitcoin, Ethereum, and Dogecoin. However, the crash in the crypto market down in May dragged the token downwards and had it struggling to remain near the highest point it achieved in April, which varies from $14.60 to $16.60 for different crypto brokers.

The price has turned bullish again after the bearish period for cryptocurrencies from May to June, which saw Theta decline to $3.50. Now, Theta is trading at twice that price, with a bullish bias, so it will continue to follow the rest of the market in the months ahead.  THETA/USD is finding some resistance on the weekly chart which we will take a broader look in the sections below, but if that resistance is broken, that would be a good time to buy Theta.

After the popularity of YouTube and other similar projects, video streaming became widely popular in the world. However, video streaming services still face many problems despite their attractiveness, including the high cost of the content delivery networks. The high-resolution streams demand high prices along with the last-mile delivery issues. Keeping in mind these issues and the popularity of video streaming, the developers came up with a solution called Theta Network with its native token THETA.

Theta aims to disrupt the video storage industry with its use of blockchain technology. The project enables the users to store the files in a decentralized format instead of hosting videos in data centers. Theta Network was launched in Spring 2019 as an open-source blockchain and peer-to-peer network for providing high-quality video streams at low cost to developers. The content creators can build specialized dApps on the blockchain, while the viewers can benefit from the rewards they receive after sharing their bandwidth.

Recent Changes in the THETA Price

THETA Price Prediction for the Next 5 Year

During the first couple of years of its existence, the price of THETA stayed around the $0.10 level. However, things started to change last year when the price broke the $0.20 mark in May 2020 for the first time. In December 2020, the prices surpassed $1, and then prices soared massively. From December 2020 till Feb 2021, the THETA coin had crossed the $3.7 level, and in March, its prices soared more than 293% in a single month and reached $14. It touched an all-time high in April at $15-16, and since then, it has been declining.

Like all other cryptocurrencies, Theta struggled during most of summer, as the world’s second-largest economy has initiated a crackdown on cryptocurrencies. The Chinese government asked all financial institutions to block all accounts dealing with cryptos in any way. Furthermore, the government has started shutting down all cryptocurrency mining facilities working in the country, which added further pressure on the market and dragged not only THETA coin but also others lower.

However, the outlook for the THETA token has turned positive since late July and is positive for the long-term as investors and fans had a great interest in the launch of Theta Mainnet 3 on June 30 2021. This upgrade introduced TFUEL Staking and uptime mining and led to more activities in the non-fungible tokens (NFTs) industry. Furthermore, the outlook for upcoming years for THETA token also looks promising as streaming video is not going out of fashion anytime soon. The blockchain platform has begun to roll out in the beta phase to appreciate a thriving decentralized ecosystem. Following are some factors that could raise the price of THETA tokens in upcoming years.

Global Video Streaming Market Growth – With the increasing popularity of the video streaming industry, the dominating platforms in the sector, including Netflix, YouTube, Hulu, Amazon Prime Video, and Twitch, have gained a lot of attention lately, in addition to other decentralized platforms. The whole sector is projected to grow at an annual rate of 20% from 2020 to 2027, and Theta Network can disrupt the current monopolized space of the sector by elite businesses.

The blockchain of Theta works to reduce the content delivery network costs related to the streaming services. It can also serve the existing giants with their technology, streamlining both operations and costs significantly.

Increasing Adoption – Many high-profile companies like the above-mentioned giants of the video streaming industry can get several benefits from the highly efficient blockchain and trending token. Theta is used to divert throughput to the videos demanding the most bandwidth, which are also considered high-performing videos due to high traffic and viewership.

The companies which utilize the service provided by the blockchain protocol are required to hold Theta tokens. At the same time, the network itself gets the benefit of acquiring a separate currency for gas through a fee-based system.

In this way, both parties can yield greater profit margins as Theta network reduces the cost, making this integrated lucrative platform more appealing for the companies and investors. This feature of high profitability encourages many video streaming service providers to adopt the Theta network. The demand is increasing with the popularity that depicts a bright future for THETA token.

High Profile Partnerships – Another thing that has raised the popularity of the Theta network and made it so attractive is its partnership with one of the shining beacons of the market. The famous partnerships of Theta include Google, NASA, and Samsung, along with many others.
Google powers the cloud infrastructure of Theta, and the users of Google can operate nodes on the Theta network. Samsung users can enjoy Theta.tv on all Samsung Galaxy S20 smartphones. Partnership with brands like NASA and Nervos and dozens of other content-creating companies are already growing, enhancing the outlook for the cryptocurrency involved with the network.

Theta Mainnet 3.0 – With the of launch the Theta Mainnet 3.0 upgrade, the company introduced TFUEL Staking and Uptime Mining. The upgrade was scheduled for April 31 but was introduced on the 30th of June, which will substantially boost the token economics of TFUEL. Theta blockchain has two tokens, THETA and TFUEL. The first one is the governance token, whereas the second is used to reward node participants and use within the Theta blockchain. The Theta Mainnet 3.0 will burn at least 25% of each TFUEL used to pay for fees for the Theta blockchain. The burning will reduce the circulating supply of TFUEL and eventually lead to increased demand due to scarcity and hence, the TFUEL and THETA price will be on an increasing trend in the future. The future of Theta looks bright as it is more likely a contender to be the next YouTube in the decentralized world.

The THETA/USD coin is consolidating in a narrow trading range of 8.40-4.06 level. On the weekly timeframe, the THETA/USD has formed a symmetrical triangle pattern that’s extending resistance at the 8.40 level while the support lingers around 4.06. On the higher side, a bullish breakout of the 8.40 level could lead the THETA coin towards the next resistance levels of 10 and 12.40.

The 50 period EMA is holding at around the 4.90 level. Since the current market price of THETA is above EMA, we should consider taking a buying trade in the THETA/USD pair. At the same time, the RSI is holding above 50, supporting a bullish trend. However, the coin seems to face major resistance at the 8.40 level and a bullish breakout of this level could drive further upward trends in the market. 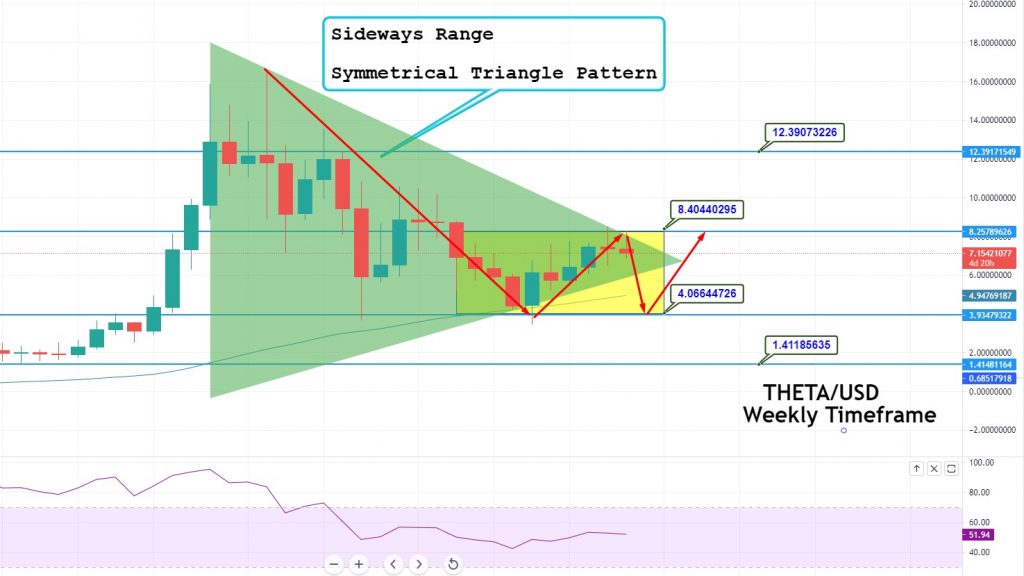 Typically, the symmetrical triangle suggests indecision among investors. Therefore, therefore, investors will be waiting for any solid reason to enter the market. A bullish breakout of the 8.40 level may offer us a strong buy opportunity to target 12.40 and 18 levels. Conversely, the breakout below 4.06 may offer a sell trade until 1.41 levels. Bullish bias dominates for now. Good luck!