Tether USDT started life in 2014 as StableCoin and then changed its name to its final version Tether. In fact, it started as a white paper in 2012 by J.R. Willett which was published online in January 2012. Tether itself was co-founded by Brock Pierce, Reeve Collins, and Craig Sellars. Tether was a new cryptocurrency on top of the Bitcoin Protocol but it has been adding new networks where this cryptocurrency is accepted for transactions and it is expanding further, with the massive expansion of the Decentralized Finance DeFi ecosystem, to other blockchain networks.

Tether is one among a strange breed of cryptocurrencies considering the way that most cryptocurrencies have been going in the last year, increasing massively in value as they turn into safe havens. Tether hasn’t moved a bit, but that’s the reason Tether is different is a stablecoin, some of which don’t really change in value since they are either pegged to a fiat currency or are handled/manipulated the same way a central bank does, keeping them from fluctuating in value. Tether USDT is pegged to the US Dollar, at the rate of 1:1, as Tether LTD. claims, which is where it has been trading most of the time.

Since Tether is a stablecoin, with a fixed value to the USD, the main factor for its price in real money follows the price of the USD. The USD has been on a major bearish move since March 2020, with the coronavirus proving to be a negative event for the USD, which in turn was negative for Tether, since it declined in value compared to other fiat currencies, or other cryptocurrencies. The market capitalization keeps increasing by the way, as it moved above $40 billion recently, as shown by the chart above, but that has more to do with the adoption of Tether the expansion to more crypto networks and the expansion of the DeFi market.

Tether Price Prediction for the Next 5 Years

Tether As A Stablecoin Cryptocurrency

Stablecoins have appeared with the increasing popularity of cryptocurrencies in the last decade or so. They are centralized currencies, issued by a certain company, run on the decentralized blockchain network. The Stablecoins are pegged to a physical fiat currency, either by way of allocating a fixed amount of the fiat currency for a corresponding amount of the Stablecoin, which doesn’t have to be exactly the same if the peg is not 1:1, or by manipulating the Stablecoin to remain as close to the desired exchange rate as possible, by issuing or extracting such coins from the market, in order to increase or decrease its value. So, while other cryptos use Proof of Work (PoW) or Proof of Stake (PoS) to issue cryptocurrencies, Tether uses the Proof of Reserves (PoR) inventory process.

Tether falls in the first category of Stablecoins which are allocated a fixed amount of cash to keep it, well, stable, hence the name. USDT is issued by Tether which aims at keeping the conversion rate at 1:1 with the USD, so it has to keep the amount of USDT in circulation corresponding to an exact amount of real USD more or less. It’s for this reason that Tether keeps adding to the USD reserves, as miners keep minting new Tether coins. USD Tether is considered a Dollar cryptocurrency, while there is also EURT. Being pegged to a real world currency protects crypto holders, particularly those who want to use them for everyday purchases, from extreme volatility, as we have seen in the crypto market since Q4 of last year.

Why Choose Tether and Stablecoins?

With the emerging and eventual growth of the cryptocurrency market, considering its extreme volatility, the need for steadier digital currencies arose and Stablecoins appeared. Initially it was Tether which came out, but then other Stablecoins came to life, such as the USD Coin (USD), True USD (TUSD), Pazos Standard (PAX) etc. Tether is undoubtedly connected to BitFinex, since the same people who stand behind this crypto exchange such as Philip Potter and Giancarlo Devasini, are also closely connected to Tether, while the CEO of Tether is JL Van Der Veld/.Tether is also accepted as a cryptocoin in other exchanges like CoinSpot, Binance, Kraken, etc, which makes it easier to use or exchange for other cryptos. Tether tokens now exist on more than eight blockchains, such as Ethereum, Bitcoin Tron, OMG Network, Solana, etc.

Although the main reason that Tether and other stablecoins appeared was to avoid the madness in the cryptocurrency market, this market has been really volatile, which has only increased in recent months. Since 1 USDT corresponds to $1 in reserves in Tether and the price follows that of the USD, the volatility is insignificant compared to other normal cryptocurrencies. The price stability that Tether provides is also useful for trading cryptocurrencies, rather than using one for another. But, the price stability is even more important for normal crypto users, who use it to buy and sell everyday products and services, either online or in normal shops.

Another hurdle that people usually face comes from transaction fees, which are considerable in value for larger amounts and as a share of the funds being transferred, especially for smaller amounts. SWIFT (Society for Worldwide Interbank Financial Telecommunication) transfers start from $20 in fees and go upwards, in many cases averaging around $40-50 for smaller amounts, since it takes two banks usually to process the transfer the intermediary bank and the receiving/processing one. Other  methods of payment are even more expensive. To mention a few are Western Union, PayPal, MoneyGram, etc, where you will have to pay hundreds of Dollars/Euros for transfers. With Tether, the transaction charges are close to zero, with only standard blockchain network fees applying.

The transaction speed was another reason that cryptocurrencies were born, which is helping them become increasingly popular. The average transaction speed for bank transfers varies between two and four working days, which including weekends and other bank holidays, can take up to a week. With Tether, transactions only take a few minutes, meaning that funds can be withdrawn by the other party pretty quickly and goods or services can be delivered within minutes. This helps different fractions of the society, such as traders, goods and service purchasers, etc. that need to move funds around fast. It can make a big difference between moving funds in a few seconds/minutes or a few days in the digital world nowadays.

Tether started as a simple idea in the beginning, with USDT (US Dollar Tether) at a rate of 1:1 as we mentioned, now there are EURT (Euro Tether), CHNT (Chinese Yuan Tether) and XAUT (Gold per ounce Tether). It is also one of the stablecoins with the widest reach across different blockchain networks, such as Bitcoin (BTC), Ether (ETH), Tron (TRX), EOS, Solana (SOL) and Bitcoin Cash (BCH).

Tether is adding new block-chains to the list, which include Polkadot and Kusama. That will further expand an already significant list of adopters which we mentioned above. Paolo Ardoino of Bitfinex said that the decision to release Tether on Polkadot was done with decentralized finance in mind:

“Our integration with Polkadot serves to support the decentralized finance ecosystems that are growing across blockchains. There has been notable development in Web 3.0 technologies, and we look forward to helping them unlock the internet of value.”

Kusama is a “canary network” of Polkadot, so Tether will launch on Kusama as a test before deploying on Polkadot. Kusama is expected to lead the way in implementing new protocol upgrades. Although Polkadot will launch para-chains a few weeks before Tether being launched on the Polkadot network. 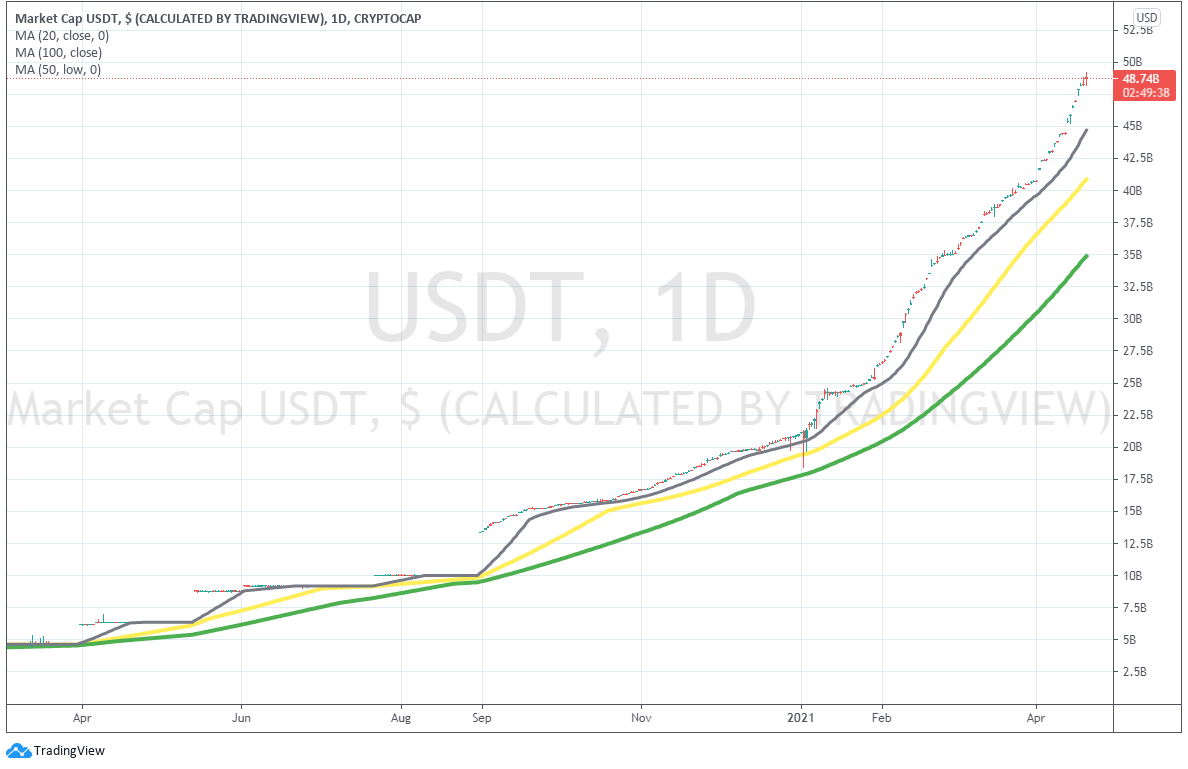 When we analyze Tether, or USDT to be more specific, we should take a look at both the USDT market cap chart, as well as the USD chart. Looking at the daily USDT market cap chart, we see that in the first several months the market cap was growing slowly, but then the adoption of Tether increased as the DeFi increased as well. In May the trend started picking up pace, as the cryptocurrencies started acquiring the safe haven status and now Tether’s market cap extends above $45 billion. The intervention to increase the USD reserves has increased over time and the trend is gaining further momentum, with the 20 SMA (gray) unable to catch up with the price since the beginning of 2021. 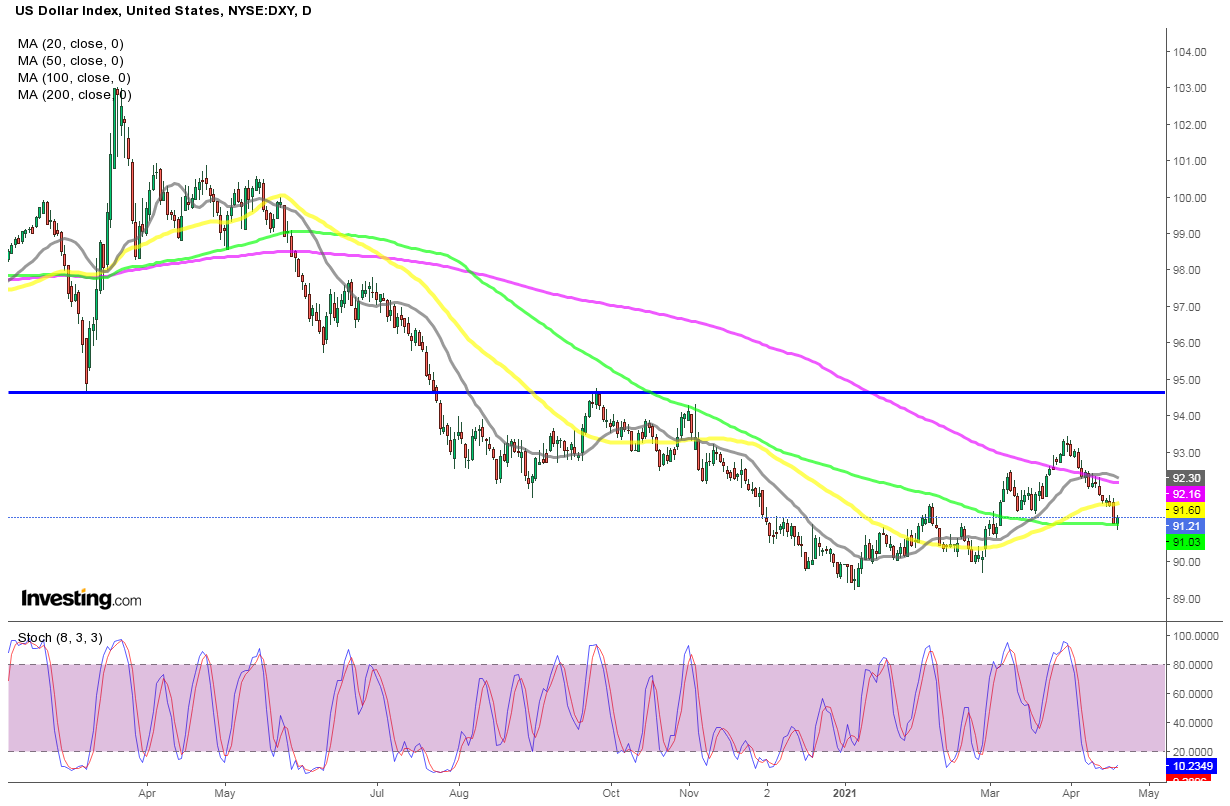 The 100 SMA is acting as support for the DXY now

Regarding the USD, we see that the DXY index has been bearish since the middle of March last year. The increased political and social instability in the US during last year turned traders away from the USD, which kept declining. The USD index DXY fell from around 103 points to below 90 by early January this year. Although, it has completed the three bearish waves down and since January it has been increasing. The price moved above all moving averages on the daily chart, which was a bullish sign and the USD stopped declining. But, April has been bullish again for the USD, as the price is falling below the 200 SMA (purple). This might be a retrace before the bullish move resumes again, since fundamentals are only getting stronger in the US, but buyers will have to push above the 95 level which has acted as support and resistance before, in order to continue the long term trend to turn bullish completely. At least, the 100 SMA (green) is holding as support for now.