Tezos (XTZ), which ranks 18th by market capitalization, at around $ 1.55 billion as of November 15th 2020, started life in the middle of 2018, which was not the best time for cryptocurrencies, since the digital currency market was in the middle of a major pullback, after the surge at the end of 2017. As a result, it followed the main cryptos down in the first few months of its life, losing more than 90% of its value until December of that year.

But, it came back to life in 2019, as its use increased and the cryptocurrency market started to revive once again, and in August 2020, it reached $ 4.38. However, it didn’t benefit from the surge in the digital currency market during October and November, when Bitcoin and other cryptos surged higher, which raises questions. But the 20 SMA is holding as support on the monthly chart, and there are some fundamental developments going on for Tezos, so hopefully the bullish momentum will resume, although it’s not all that certain right now.

Recent Changes in the Tezos Price

As with all other cryptocurrencies, Tezos is affected by the sentiment in the crypto market, although, in recent months, it has fallen behind other major altcoins, which have been surging higher, while the XTZ/USD has pulled back lower, trading at around $ 2. Besides that, the fundamentals behind the network are a bit brighter, as Tezos is partnering with certain banks in Europe, with the aim of becoming the blockchain of choice for major European central banks. But, it remains to be seen how that will go, because the reaction of the markets to the news wasn’t too optimistic.

Tezos Price Prediction for the Next 5 Years


The Tezos network uses a Proof-of-Stake (POS) mechanism, which Ethereum is also adopting now, since it is simpler to use than the Proof-of-Work (PoW) and requires less energy. The Tezos network is a decentralized smart contract and application network. It has an on-chain governance layer, in order to enable efficient network upgrades and provide a transparent stakeholder community.

But Tezos might have fallen out of demand to some degree, as the DeFi coins have become more widespread. However, there are some developments, which might make the Tezos network pretty popular in Europe. Earlier in 2020, Banque de France announced that French investment bank Societe Generale as well as other organizations, will be working on a project to conduct interbank settlements in Europe, using a Central Bank Digital Currency. This could be big news if it materializes, although the reaction so far has been minimal, as we saw back then, which suggests that traders are not very optimistic about it, although it is still a bit early to tell.

Technical Analysis – Will Moving Averages Keep Pushing the XTZ/USD Down?

Tezos started life at a bad time, at the end of June 2018, when the cryptocurrency market was making its great descent, after the major surge in late 2017. It started off at around $ 4 and climbed to $ 4.38, but then started to decline, falling to $ 0.325 by December of that year, where it remained for a few months, forming several small doji candlesticks, which are bullish reversing signals, after the decline. The price reversed higher at the beginning of 2019 and has been on a bullish trend since then. 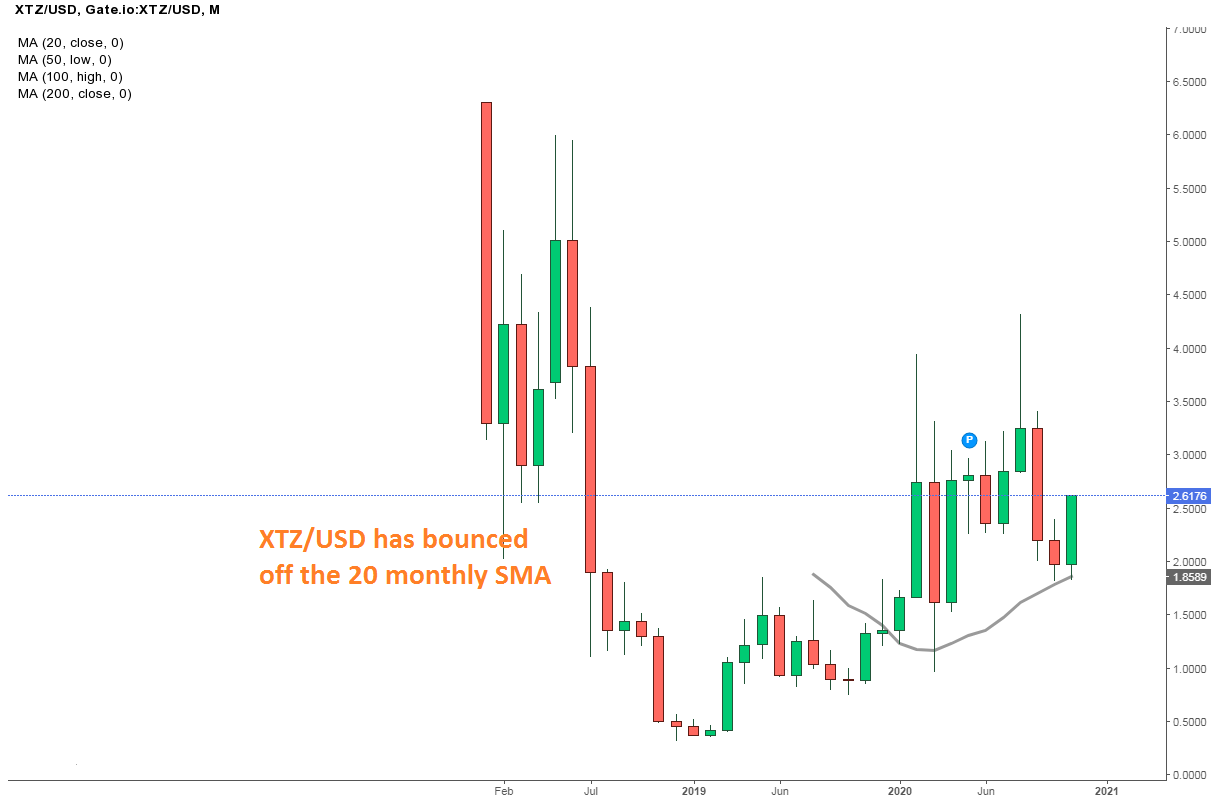 The bullish trend is resuming again in Tezos

The 20 SMA (gray) provided resistance for a month in December 2019, but it was broken in January 2020, turning into support immediately. It held for a second time in March, when the coronavirus broke out, which sent the crypto market diving lower, due to the uncertainty. But later, the global uncertainty turned out to be positive for digital currencies, and the XTZ/USD climbed to $ 4.33 by August. However, the increase didn’t follow the rest of the market in the following months, and the price reversed lower, falling to the 20 SMA on the monthly chart once again. The 20 SMA is still holding, which is a good sign for buyers. 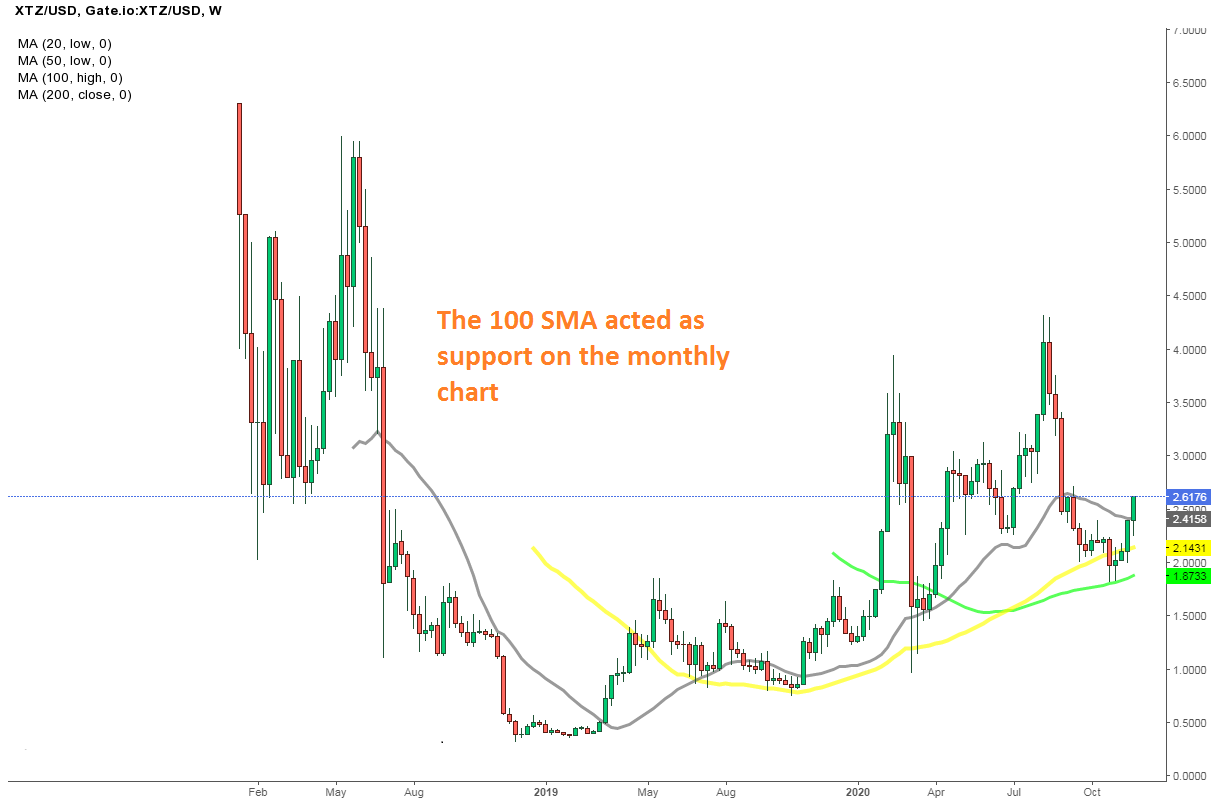 On the weekly chart we see that the 20 SMA was providing resistance when the price was declining, but it was broken in early 2019, soon before the 50 SMA (yellow). The 50 SMA turned into support, and it held after the big decline in March 2020. It held again for several weeks in September/October but was eventually broken, although the 100 SMA (green) turned into support. But, the bounce doesn’t seem too convincing, since the 50 SMA has turned into resistance on this chart, so according to the weekly chart, the future is not very certain right now, as the price is stuck between these 2 MAs at the moment.