Choppy Trading In The WTI Crude Oil – Inventory Figures Ahead

A slight gain in inventories often encounters a muted reaction in the market. But yesterday, the traders actually felt uncertain after the API report as the market was expecting a drop in supplies.

In our earlier update, Weaker Dollar & Output Cut – A Trade Setup In WTI Crude Oil, we explained the reasons behind a bullish oil. Saudi Arabia, Russia, and Kuwait's decision to extend supply cuts until the end of March 2018,caused prices in the energy sector to rise. Therefore, the gain in inventories wasn't in line with the market sentiment.

Today, we are waiting for the Crude Oil Inventories which are expected to released by the EIA (Energy Information Administration) at 15:30 GMT. 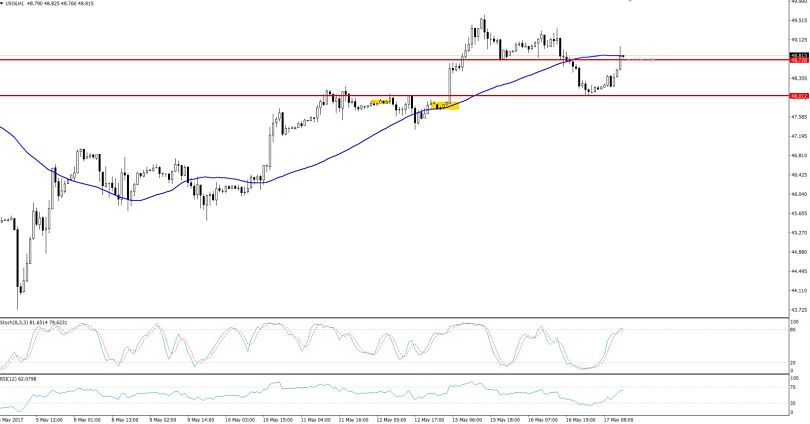 On the daily chart, 50 periods EMA is extending a major hurdle at $49.30 and the same level is shared by a double top pattern.

On the other hand, the 4-hour chart is signaling a buying behavior on the part of investors as the oil has crossed above the 50 periods moving average.

Nonetheless, the momentum indicators seem confused. RSI is signaling a bullish bias while Stochastic is bearish at the moment.

At this point, the market trend is very unclear. That is why we haven't shared any forex trading signal on the WTI crude oil. However, our Forex Trading Signal on Gold has matured at take profit level.