The Trend Reversal is Official for USD/CAD, as the 20 SMA Turns From Resistance Into Support - Forex News by FX Leaders 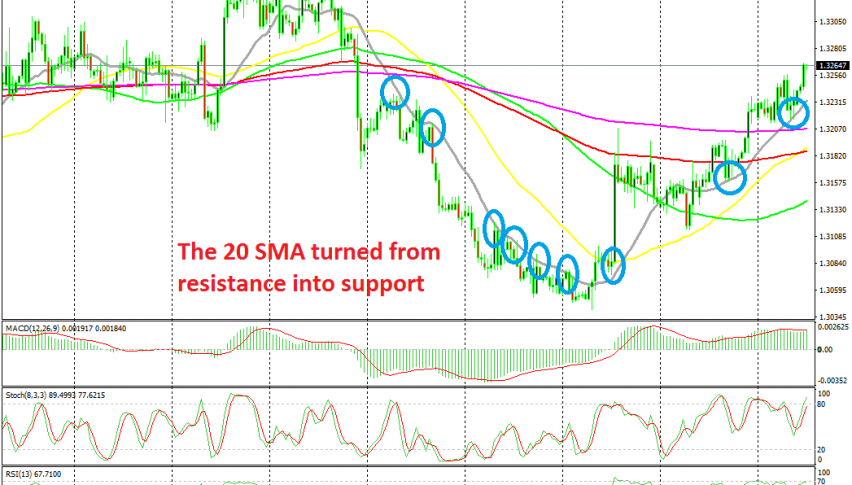 The Trend Reversal is Official for USD/CAD, as the 20 SMA Turns From Resistance Into Support

The 20 SMA is pushing USD/CAD higher

USD/CAD turned quite bearish during most of October, as the USD turned bearish on deeper contraction in US manufacturing. Besides that, risk currencies such as the CAD turned bullish after the sentiment improved in financial markets due to the US-China trade deal. On top of that, Crude Oil turned bullish in October after falling lower in September, as Saudi Arabia restored the Oil production capacity, following the drone attacks earlier that month.

As a result, the CAD turned bullish and USD/CAD turned bearish. During that time, the 20 SMA (grey) was providing resistance on whatever pullbacks, pushing the price lower. This shows that the trend was strong, since sellers weren’t waiting for larger MAs to catch up.

But, the price reversed above 1.30 once again, which seems to have formed a support area above that level. As we can see from the H4 chart above,the 20 SMA turned from resistance into support in the last several weeks. Yesterday, we saw this pair retrace lower but it found support at the 20 SMA and bounced off of it again. So, the trend reversal is official now. We will now try to go long on this pair, once the price retraces to the 20 SMA again.