Will the Downtrend Resume for USD/JPY? - Forex News by FX Leaders 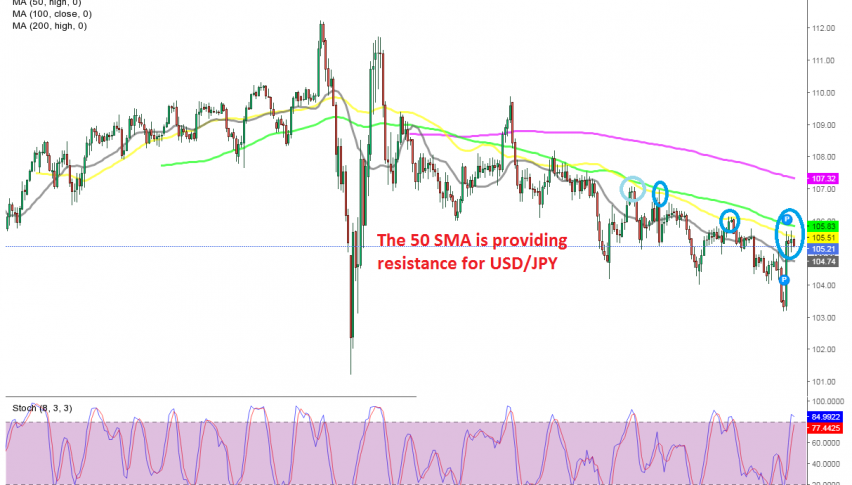 Will the Downtrend Resume for USD/JPY?

The retrace higher is complete, with stochastic overbought

USD/JPY used to be on a bullish trend in Q4 of last year, as the US and China were heading towards a trade deal, which improved the sentiment in forex and sent safe havens lower. Moving averages were providing support, but after the crash and the big reversal in March on coronavirus, the trend turned bearish.

Moving averages turned into support and they have been pushing USD/JPY lower since then. The 100 SMA (green) was doing that job initially, then the 50 SMA (yellow) took over on the daily chart. Last week we saw another bearish move lower as the USD declined on election week, pushing USD/JPY to 103.20.

But, the sentiment improved on Monday after news from Pfizer on the coronavirus vaccine, which is still unclear if it works. But it was enough to improve the sentiment in financial markets, sending safe havens lower and USD/JPY higher. But, buyers ran into the 50 SMA and stochastic is now overbought. The previous 2 candlesticks also point to a bearish reversal, so this might be a good time to go short on USD/JPY.

EUR/USD Bounces Off MAs, After the ECB Monetary Policy Meeting Accounts
1 hour ago