EUR/GBP Reverses at the 200 SMA, After UK Inflation Cools Off - Forex News by FX Leaders

EUR/GBP Reverses at the 200 SMA, After UK Inflation Cools Off

EUR/GBP continues the downtrend after the UK CPI report

EUR/GBP has been bearish since the end of September, declining from around 0.8660s to 0.8420s during this time. In the same period, moving averages have been acting as resistance, pushing the price down on the H4 chart. Today, we saw a small jump as the price retraced higher, but the retrace ended at the 50 SMA (yellow) on this timeframe. Now, the price has reversed back down, and the downtrend has resumed again.

The jump today came as a result of UK inflation cooling off a bit in September, as the report below shows, but Eurozone core inflation is way below the UK core CPI, and the ECB keeps brushing inflation under the carpet, as Villeroy’s comments today showed. This helped reverse the price down in EUR/GBP. 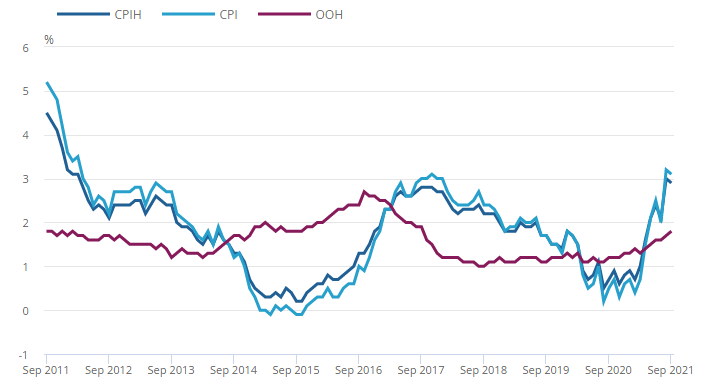 There has been a mild drop in UK annual inflation, but it remains at an elevated level overall, so I don’t expect that to change the situation ahead of the BOE policy meeting next month. Looking at the details, the largest upward contribution to September inflation came from transport, while restaurants and hotels made the largest downward contribution to the 12-month inflation rate. Regarding the latter, it is largely due to some easing of the “eat out to help out” scheme that was launched in summer last year, so there’s that to keep in mind too.

No change to the initial estimates, as it reaffirms a continued jump in annual inflation in the Eurozone, keeping the pressure on the ECB to try and maintain its supposed ‘transitory’ narrative.

Nothing that we haven’t heard before, but again, some subtle shifts in confidence. The keyword in the headline is “expected”. Anyway, as long as ECB policymakers continue to maintain the view that inflation is just transitory, I will keep posting the below picture too, as an anecdote:

US Dollar's Rally on Pause After UK, Canada Inflations Soar
1 week ago