2016 is flying past. We successfully closed April with 201 pips. It wasn´t that easy, though, and in fact, it was a pretty rough month as we´ll explain in the signals section below. However, we put in the hard work required and came out on top. The sentiment has finally picked up and petrol prices have been surging despite failing to reach a consensus about production freeze at the Doha summit. As a result, the Canadian Dollar has benefited from this while the Euro has made good gains after a shift in market sentiment from negative to a more positive light. We´ll talk about all this and more issues that occurred in April on this monthly review.

Oops, I pushed the Yen 5 cents up!

As we mentioned in the opening paragraph, it has been a tough month. The market did come to its senses and finally started to reflect the world economy as it is (i.e. moderate recovery), unlike in previous months where everyone was in a panic because of the potential financial crisis. This helped us finish the month with a 201 pip profit. Still, there were a few things that didn´t make sense; why has the Japanese Yen continued to be in demand despite the economy being in the worst position among the large economies… and the monetary easing policy from the Bank of Japan (BOJ) with negative rates and the QE program?

We started the month with a long-term buy forex signal in USD/JPY that we had opened in February, which reached stop loss and was worth hundreds of pips. We didn´t give up, however, and continued to play with the long-term signals. By the end of the month, we finished well above in the green. The second and the third week, in particular, have been very profitable for us as we made 318 and 357 pips, respectively. We opened seven long-term forex signals in the last three weeks and all closed to bring us a total of 582 pips, so these signals contributed a lot in our positive performance this month. We have also issued 63 forex signals this month, which is the lowest number for a while, but that´s because we concentrated a lot on the long-term signal strategy in order to recuperate from one devastating signal in the first week. So far the total result for 2016 is 1221 pips. The win/loss ratio this month is a pretty respectable at 75:25.

February and March were all about the central banks taking action, with the European Central Bank (ECB) going crazy with monetary easing and the Bank of Japan (BOJ) going negative on the deposit rates. This month was about central banks as well, but for another reason, that being inaction and disappointing the market expectations. In March, the Federal Reserve (FED) turned bearish on the back of global financial turmoil that the markets experienced in February. Since these global risks have diminished and the petrol producing countries are not in a tough spot anymore, the market normally expected a more positive FED FOMC statement this time  with a possible June rate hike. But, the FED turned the attention to the domestic economy and its weakness. I mean, there are some fragile sectors in the US economy but it´s been like this for quite a while now so it’s nothing new. On top of that, the positive sectors or aspect of the US economy outnumber the weak ones by 2 to 1. But Yellen remains dovish so there were no indices for a June hike in the FOMC statement. The USD obviously suffered from this and finished the month near the lows.

Another central bank that disappointed this month was the BOJ. After the surge of the Yen in the last few months, with USD/JPY falling from 125 to 108, most people expected the BOJ to intervene in some way. They finally issued some comments about introducing a program whereby they would lend money to second level banks and pay them interest for the loans issued. So, amid these comments USD/JPY rallied from 108 to around 112 in a few days. Not only did they not do this, but they even denied the comments. At this point, the market started to think that governor Kuroda was just talk and no action. USD/JPY obviously tumbled and reached as low as 10660s in the next two days. The Japanese economy has been in recession and deflation for many quarters now – so a strong Yen is the last thing Japan needs right now. Well, let’s see if he will toughen up and do something next month. Another noticeable thing this month was the shift in the market sentiment, from utterly sour in the last few months to pretty positive. This has pushed the petrol prices higher despite the OPEC production near record levels and storage capacity close to full. West Texas Intermediate (WTI) is about 21 cents above the lows at $46/ barrel and London Brent Crude is at $48/barrel. At least the possible financial collapse of the petrol producing countries is out of the question for the time being.

The measures taken by the BOJ in February and March haven’t had a great impact on the Japanese economy since the manufacturing sector remains in contraction. The machinery tools are declining by more than 20% year on year, deflation is evident (especially on the producer side), the industrial production and the household spending are both declining by more than 5%. At least the average earnings and the consumer confidence picked up this month while the unemployment rate fell to 3.2%. Manufacturing in China finally resurfaced in April, industrial activity beat expectations by a respectable margin and the fixed asset investments came out higher as well. Manufacturing in Britain posted the lowest numbers of the last few years but inflation picked up well. The market is not concerned about the UK economic data because all the focus in on the Brexit referendum. Same as in Japan, the ECB monetary policy has not had great effect on the European economy. The industrial activity and inflation both posted negative numbers in April. Even the manufacturing sector missed expectations. Only the economic sentiment improved. In the US, the fragile sectors have weakened this month and the strong ones increased in strength. The inflation trickled down to just 0.1% and the GDP numbers missed expectations while the employment is near the natural level and the earnings have increased as well. However, it looks like the consumers are saving up because the retails sales declined this month.

USD/CAD has lost nearly 22 cents since mid January this year. Last week, we said that the smooth 200 MA in the monthly chart might be the turning point. It did hold in the first attempt and reversed, but it only managed to climb 150 pips higher. Now, the price closed the week below it and settled around the 1.2650s. The petrol price is moving higher and getting closer to $50/barrel, so unless is turns around the CAD is bound to move up and USD down. Maybe the 100 MA in the weekly chart (which stands at 1.24) could provide the solid support. In the daily chart, we see a perfect example of how a moving average turns into resistance after being broken to the downside. All the MAs have provided solid resistance on the pullbacks after being broken. Going short on them during these retraces would have been perfect, but who knew that the price would fall by 22 cents after a five-year, 54 cent uptrend? 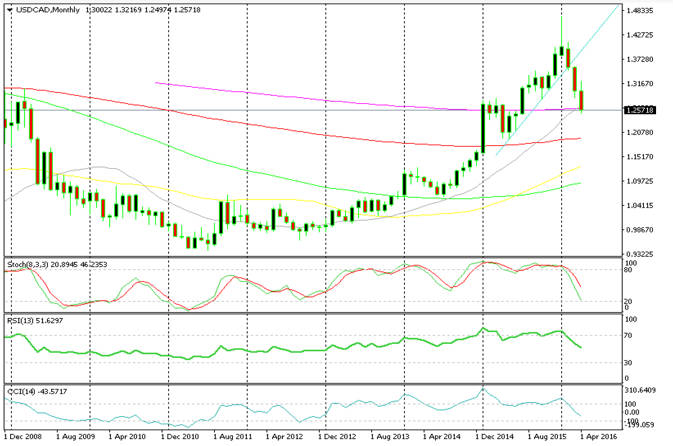 The price closed below the 200 smooth MA 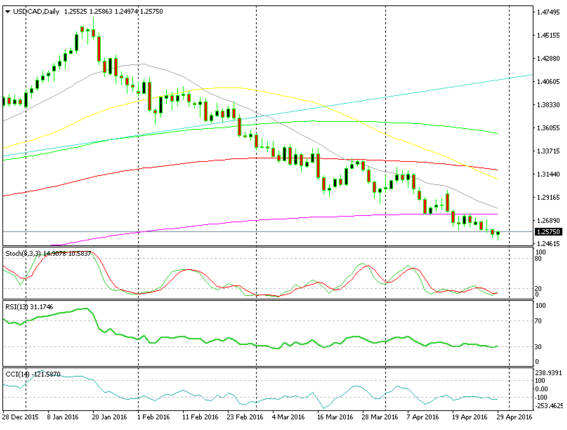 All five MAs have provided solid resistance after being broken

In the first week of April, USD/JPY declined about 350 pips and the price reached the smooth 100 MA on the weekly chart at 108. That MA held the price well and provided support for three weeks, but the BOJ disappointed in their monthly meeting which took place on the last Thursday of the month. So, in the last two trading days the price declined more than 500 pips… breaking and closing below the 100 MA. At the same level as the 100 MA in the weekly chart, we can find the 200 MA on the monthly chart, but even that couldn´t keep the bears from having their way. The first support level is at 105.40s, which is the high from 2013 after this stands the monthly 100 MA at 104.50s, and the third line of defence comes at the 200 weekly MA at 103.70s – which was the resistance level in early 2013. 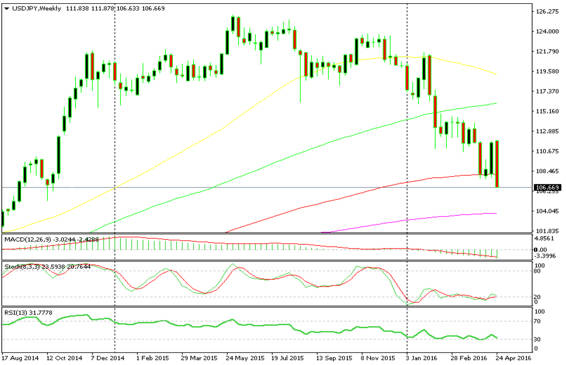 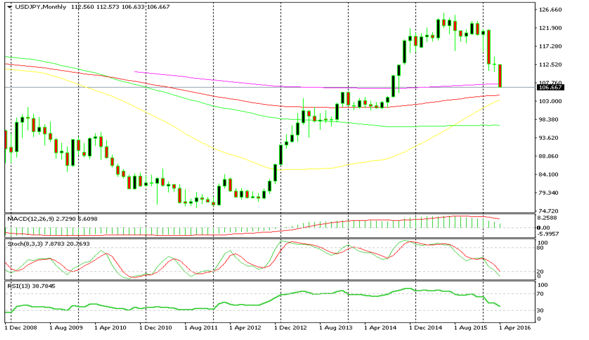 Similarly, the 200 MA was broken this month

Our month in summary

In the last few months, the central banks have over-delivered, but this month they disappointed the market expectations. The FED remained dovish and diminished any hopes for a June rate hike despite the improvement in the global financial markets. This was their main worry on their March statement. The BOJ, on the other hand, raised the market expectations concerning the injection of more money into the Japanese economy, only to disappoint those expectations two days before the end of the month. We had a rough start in the beginning of April, but recuperated well as the month progressed – hopefully, we will continue this way in May.

Is the Bearish Trend Over for USD/JPY?
22 hours ago