There´s no new emails released yet, but the FBI re-opened the investigation into Clinton´s emails. That has been confirmed by some congressmen and the State Department just held a press conference where they pleaded to cooperate with the FBI.

Trump is too far behind to catch up now, but that was enough for the forex market to go bonkers for a while. EUR/USD shot 50 pips higher while JPY/USD fell through an air pocket to 104.40 from the highs around 105.50.

The FBI commented that the investigation might go on long after Clinton becomes president, but we know that the forex market is obnoxious and any little spark can start a big fire. Obviously, this is seen as bad news for the Buck, but the Mexican Pesos and the Canadian Dollar are the biggest losers.

We promised to take a look at USD/JPY on our first update today, so we´ll conduct a quick technical analysis on this forex pair. Now that the FBI has re-opened the email investigation, the 100 pip decline makes this analysis even more relevant. 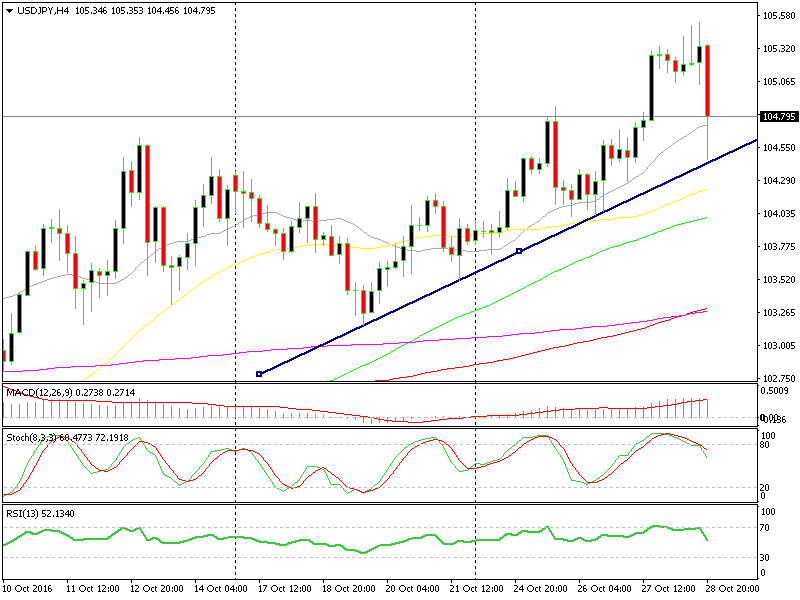 I don´t think the uptrend is over, do you?

Changing from the H1 USD/JPY chart to the H4 chart the picture becomes much clearer. The dive presented by the last candlestick is considerable but not enough to throw the recent uptrend of the course. We can see that the ascending trend line of the last two weeks held firmly during the decline which means that the uptrend is still intact.

Besides that, the price has retraced back up above the 20 moving average in grey now. No candlestick has managed to close below this moving average this week, as we can see in the H4 chart above. This is another signal that the trend is not over.

One thing which comes to light after this evening´s event is the fact that the 105 level in this forex pair has lost value as an important support/resistance level. So, we´ll keep that in mind for next week.

By the way, we got caught in the middle of this surge with our EUR/USD sell forex signal which we opened around 1.0940s. That was unfortunate, but we decided to fade this move by selling the same pair again, this time at the highs around 1.0990, so we got back some of the pips.

Alright folks, this is me for now. Have a happy and relaxing weekend because I´m sure there will be a lot of nerve wrecking events next week. I´ll be back with you on Monday morning, but my mate Eric will catch up with you sooner.