Is A 3.2% Yearly GDP Not Enough for You Mr. Market? - Forex News by FX Leaders

The second estimate for the US Q3 GDP was released a while ago and it looks pretty damn good. The annualized first reading put the yearly US GDP at 2.9% for 2016, but today´s numbers take it 3 points higher to 3.2%. You can´t argue with this number and it is the best quarter reading since the third quarter of 2014.

Yet, the forex market doesn´t agree to this. The USD made some advancement in the first few minutes after the release, but the rally quickly faded and the US pairs reversed. Now the buck is lower against most of the major currencies. 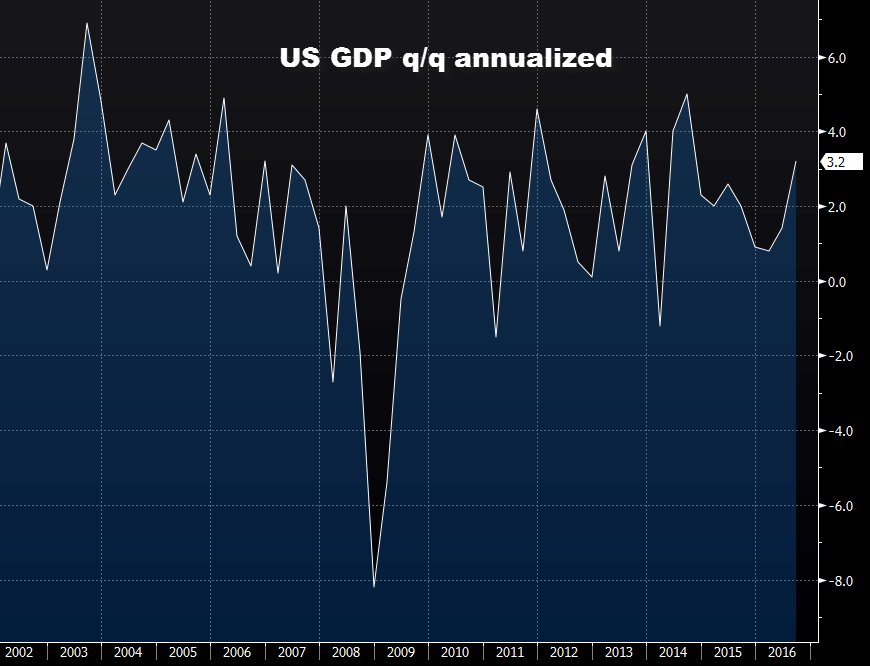 Can you argue with the US GDP chart?

What else does the forex market need? Most of the developed countries would kill for these GDP numbers. I guess market sentiment is still the predominant player right now. Anyway, let´s have a look at the details to see if there is anything we might have missed, after all, the devil hides in the details.

Let´s see, personal consumption posted a nice jump from 2.1% to 2.8%, the sales and imports/exports were little changed, while corporate profits after tax surged by 7.6% in this quarter, from a 1.9% decline in Q2. These are some great numbers, right?

Not quiet, the catch is somewhere else. Looking further into the Q3 US GDP report, we can see that business investment only grew 0.1% this quarter, while the first (preliminary) reading initially showed a 1.2% pickup. Besides that, business investment fell by 4.8%.

That´s quite a huge drop in investment. This raises questions for the following months/quarters, so I think this is the reason for the quick reverse in the expense of the USD. Maybe the companies were worried about the US elections. Hopefully, Trump´s win will make up for this decline with his lower taxation programme.