Cryptocurrencies have become quiet all of a sudden. Two weeks ago they were losing half their value in a matter of hours/days, while early last week they jumped back up losing and gaining hundreds of dollars, especially Bitcoin.

But as the week progressed, cryptocurrencies became slower. Today they have been stuck in very tight ranges, apart from a small jump when the Tokyo FX trading session started.

Ripple has only moved about 20 pips today, while Bitcoin has moved $3 – $4 so far, which is minimal considering the volatility in this cryptocurrency.

The price action has been similar in Ethereum as well, but I can spot a chart setup which might lead to a trade later on. 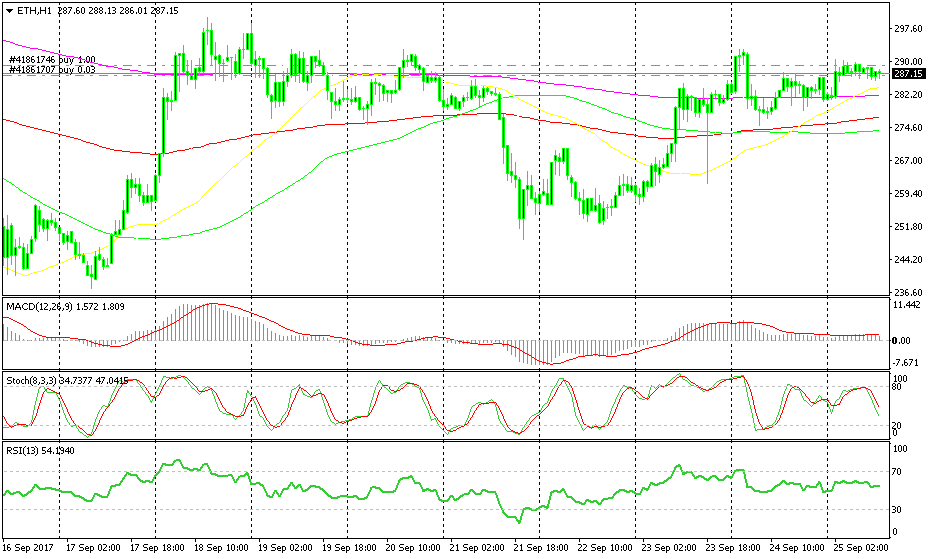 Stochastic is slowly reaching the oversold area, but the price is not retracing lower.

You see that the stochastic indicator is moving lower while Ethereum is trading sideways. This looks like a consolidation before the next move higher. Basically, the price should have retraced lower together with stochastic, but the sellers don’t have enough strength to push the price lower, so the price is just consolidating sideways.

When the stochastic indicator becomes oversold, the next move is obvious – up. But I would prefer if the price moved a bit lower to the 50 SMA (yellow) or the 200 SMA (purple) around the 282-3 area. That would increase the profit potential and limit exposure. The stop would obviously be below the 200 SMA.