Back to Black (Gold) - Forex News by FX Leaders

Back to Black (Gold)

The last Gold signal which we opened yesterday closed in profit, so it’s four winning forex signals in Gold for me this month. Gold retraced higher on the smaller time frame charts such as the H1 and H4 charts, so we decided to sell the retrace.

The price was banging its head against the ascending trendline and the 50 SMA was providing resistance on the H4 chart. In the afternoon the Gold price tumbled lower and our Gold signal closed in profit.

Although, earlier this morning Gold surged back up from last night lows. It got back up to the trendline, and it stopped there for a couple of hours. The 100 SMA (red) on the hourly Gold chart which has provided resistance before was doing the same again, and the last hourly candlestick formed a doji, which is a reversing signal.

So, we decided to give Gold another try with a sell forex signal. We opened that Gold signal around the $1,277 area, hoping that the retrace would be over, since the stochastic indicator was overbought as well. 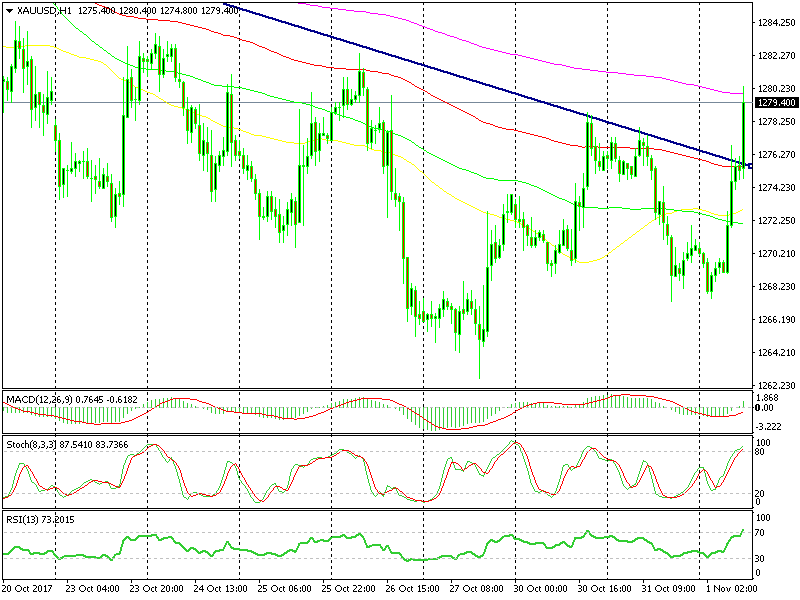 The 200 SMA provided resistance during the surge.

But, minutes after I issued that signal, Gold surged $4 higher in a matter of seconds. I can’t see any reason why Gold jumped higher. Probably, the buyers decided to have a last push to the $1,280 region.

Anyway, the price reached the 200 SMA (purple) on the H1 chart and it stopped there. It seems like this moving average is providing resistance since the price is slowly sliding lower at the moment. We're about $2 in red now with this Gold signal, which counts as 20 ticks/pips, but the climb seems to have reached a limit now, so hopefully we will see Gold return lower in the following hours.