The Cryptocurency Market Is Tumbling while Bitoin is Surging! What’s Going On? - Forex News by FX Leaders

The Cryptocurency Market Is Tumbling while Bitoin is Surging! What’s Going On?

The cryptocurrency market has been pretty correlated so far, with Bitcoin being in the lead. This means that whenever the main altcoins moved up, the rest of the market would follow higher and vice versa.

Often, Bitcoin was the first altcoin to make the initial move, which was soon followed by other cryptocurrencies. But in the last few days, this correlation seems to have gone out of the window, particularly between biotin and the rest of the crypto market.

You see on the H1 Bitcoin chart that this digital currency has been absolutely surging in the last week. It was trading around the $5,700 region about five days ago, while today Bitcoin broke above the $7,100 level. Too bad I closed my long Bitcoin position early in the week. 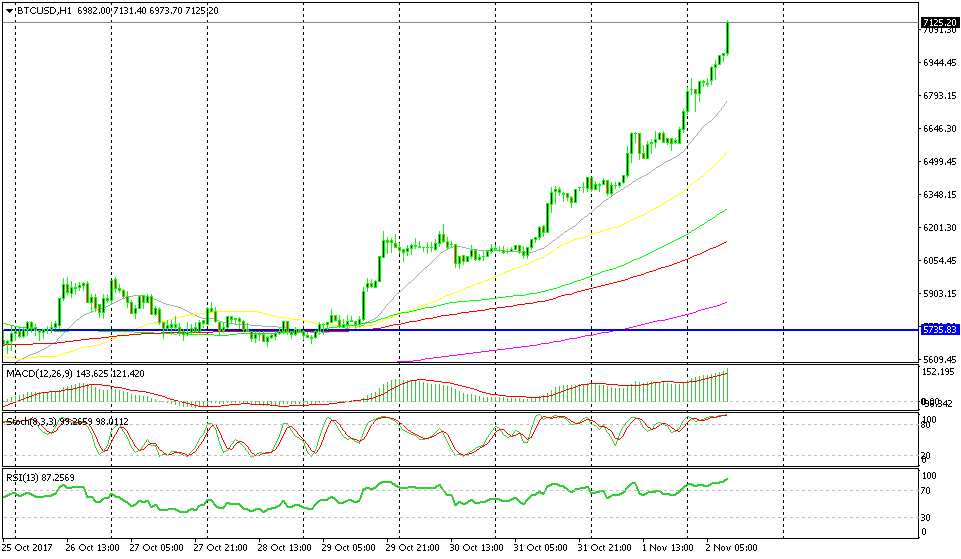 This really is too much and it’s getting sort of crazy.

On the other hand, the other cryptocurrencies are losing the ground beneath their feet. There have been quite a few developments surrounding Bitcoin which have led to this massive surge. The hard fork SegWit2x that was introduced is not finding enough support. China might resume Bitcoin trading again after the presidential “elections” and the biggest options exchange CME is incorporating Bitcoin, which means that big investors will have a chance to enter the Bitcoin market.

All of these reasons including a positive market sentiment towards Bitcoin have lured buyers in. So, Bitcoin is surging, but the rest of these digital coins are tumbling.

I suppose the money that was spread among the cryptocurrency market is now flowing towards Bitcoin, as the safest bet, as well as the biggest earning potential. I don’t think that this will go on forever; sooner or later other altcoins will join Bitcoin, but until then, all we can do is sit on our hands and just watch Bitcoin as it aims for the massive $10,000 level.