Forex Signals US Session Brief, October 12 – No Indefinite Backstop for May, While the USD Tries to Make Bullish Reversal - Forex News by FX Leaders 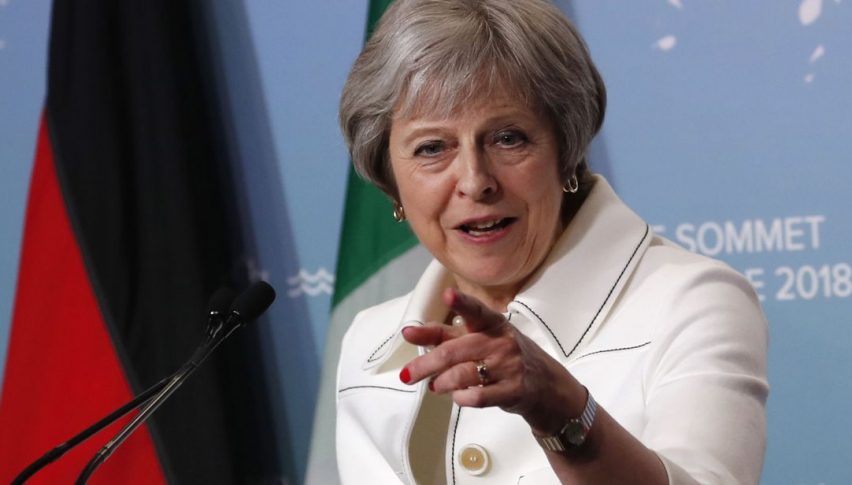 Forex Signals US Session Brief, October 12 – No Indefinite Backstop for May, While the USD Tries to Make Bullish Reversal

This is the last question guys, can't take it anymore

The main story this morning came from the UK, from a BBC reporter who tweeted that the UK Government was going to make a public statement saying that they wouldn’t agree on being trapped into a customs union with the EU indefinitely. That sent GBP/USD 50 pips lower initially. Then Theresa May’s office denied that she will make any public statements today. But, Theresa May sent out her spokesperson to tell us that she will never agree on a backstop on the Irish border that would trap the UK in a customs union permanently. That sent GBP/USD another 40 pips lower, so now this pair is nearly 100 pips lower.

But, there was also some USD strength responsible for this decline as the European session progressed and the US session started. FED’s Evans who is a dove usually said that the FED might end the tightening cycle when it has become slightly restrictive, at around 0.50% above the neutral stance. The FED is still in an accommodative stance now, so it has to hike until the policy becomes neutral, then keep hiking again until the policy becomes slightly restrictive. These sound like pretty hawkish comments when they come from a dovish FOMC member, so I hope that the USD makes a turnaround now and resumes the bullish trend. It has already turned bullish on the day, apart from USD/JPY, but that pair is another story.

First Tweet on Brexit for the Day – A BBC reporter tweeted this morning that Theresa May would make a statement where she would oppose an indefinite backstop which would leave the UK in the customs union with the EU.

Comments From Mnuchin – US Commerce Secretary Steven Mnuchin commented early in the European session that markets are correcting now since they are not efficient. He added that China needs to provide concrete action plans in order to rebalance trade relationships and that Chinese Yuan should be included in trade talks. He commented again in late European session where he said that he is worried about weakness of the Chinese currency. He also said that Trump respects independence of the FED and Powell is doing a good job. These should be positive news for USD buyers.

Eurozone Industrial Production – The industrial production grew by 1.0% in August against 0.4% expected, after 0.8% in July, which at least was revised higher to -0.7%.

Comments Form Draghi – The ECB President Mario Draghi said today that the Eurozone economy is broad based, inflation is expected to increase, but a disorderly Brexit is a risk and significant monetary stimulus is still needed. The stimulus comments should provide some bearish momentum for the Euro in coming sessions.

New Zealand’s Robertson Comfortable With the NZD – The Finance Minister of New Zealand Grant Robertson said a while ago that he is not uncomfortable with current levels of the NZD at the moment. The NZD has lost nearly 10 cents this year so it seems that he is a dove.

May Will Never Agree on A Backstop Forever – So, Theresa May ducked today and didn’t speak out for herself, but her spokesperson came out to say that she will never accept a deal that would leave the UK in the customs union forever. Backstop must be temporary and big issues still remain in Brexit talks. Negative comments for the GBP.

Italy Not Keeping Its Word for Juncker – The President of the European commission said in Le Monde that Italy is not keeping its budget promise. They haven’t promised anything to the EU officials as long as I’m aware and their deficit still comes below 3%.

FED’s Evans Wants Policy Slightly Restrictive – FED’s Chicago member Charles Evans said in an interview today that the FED policy stance is to hike interest rates until the policy becomes mildly restrictive. That is a positive comment for the USD considering that the FED removed the “accommodative” comment from the statement in the last meeting. He would like to see interest rates 50 basis points above neutral.

Turkish Lira Bounces on Events Related to US Pastor Held in Turkey – The prosecutor for the US pastor imprisoned in Turkey Brunson asked for a 10 year sentence and for the travel ban to be removed. The removal of the travel ban sounds positive, as if he will be released, hence the positive tone in the Lira, but we don’t know Turkish law, so we’re not that sure what will happen. More news has just come out from his case. He has been sentenced to 3 years but should be released on time served and his travel ban has been lifted as we mentioned above. It seems that Erdogan wants to sound tough to his countrymen but at the same time is turning around with his tail between his legs.

Theresa May May Be In Danger Next Week – Some members of her cabinet have discussed the possibility of an extended implementation period for Brexit by 6 months to avoid a backstop. Some ministers might resign next week if May agrees for a deal without a definite period on the customs union. This is definitely bearish for the GBP.

US UoM Consumer Sentiment – The US consumer sentiment came at 99.0 points against 100.5 points expected and down from 100.1 in September. Small decline in the sentiment which has sent the USD a few pips lower, enough to reach the TP level of our sell signal here. 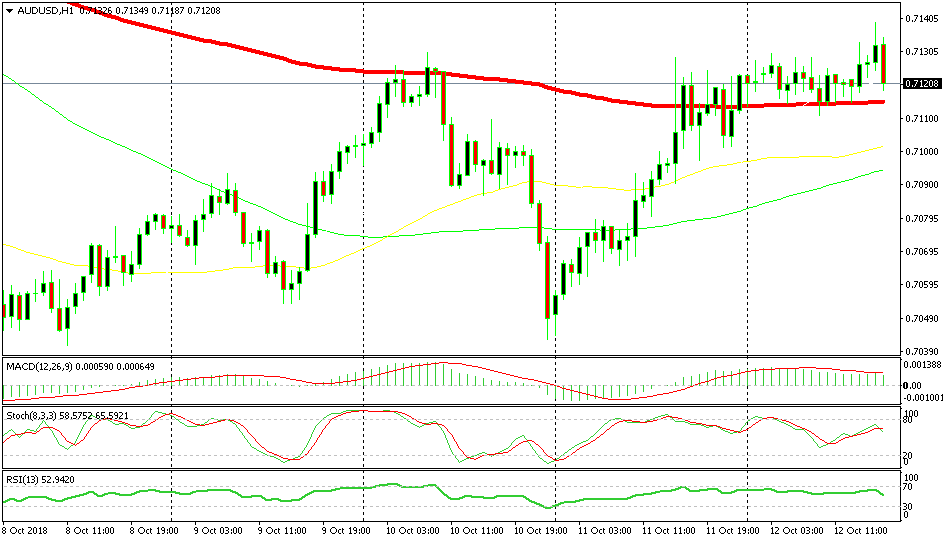 The 100 SMA has turned from support to resistance

AUD/USD has shifted to bullish in the last several days. The 100 SMA (red) was providing resistance on Wednesday but it has now turned into support after getting broken yesterday. If the price slips down to the 100 SMA now, I might be lured to open a buy signal against it. The main trend is still bearish on the daily chart, but at the moment, AUD/USD is making a retrace higher and there is still more room until it reaches the declining 50 SMA which has pushed this pair lower.

U.S. Stocks Tank As Uncertainty Rules The Day
9 hours ago