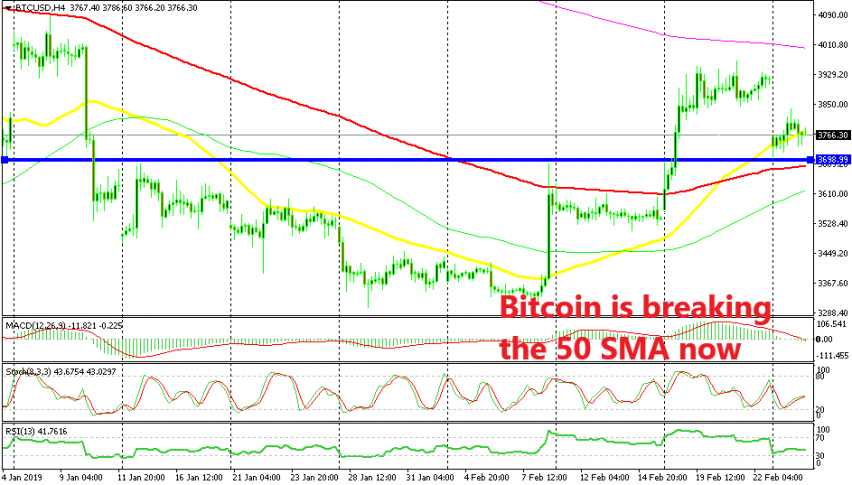 Bitcoin Still Facing Indicators as it Tries to Push Lower

Bitcoin sellers still have some work to do

BITCOIN failed to break the resistance zone around the $4,000 level last week after it made another push higher at the beginning of that week. It traded around that level for all of last week but it couldn’t break above, so the reversal came during the weekend. If something can’t go up, it will eventually go down, right?

Yesterday, the market opened with a bearish gap worth $200 although that gap shouldn’t be on the charts since the crypto market remains open 24/7. But my broker closes shop on weekends, and that’s why the gap appears on my chart. So here we are now, trading around the $3,700 level.

This used to be resistance in the last two months and it seems that it has now turned into support for Bitcoin. But besides that support area, we also have the 50 SMA (yellow) which is providing support in the H4 time-frame. That moving average has been pushing higher but the price is slipping below it now, so it will likely be broken soon.

Although, the support at $3,700 still remains and the 100 SMA (red) is approaching. This means that the sellers will have to do some work in order to break below these two indicators if they want to remain in charge. We are already short on Bitcoin from below the 100 SMA, so we support the bears’ cause.

Crypto Signals Brief for August 8: Can the Uptrend Pick Up Pace Further?
20 hours ago