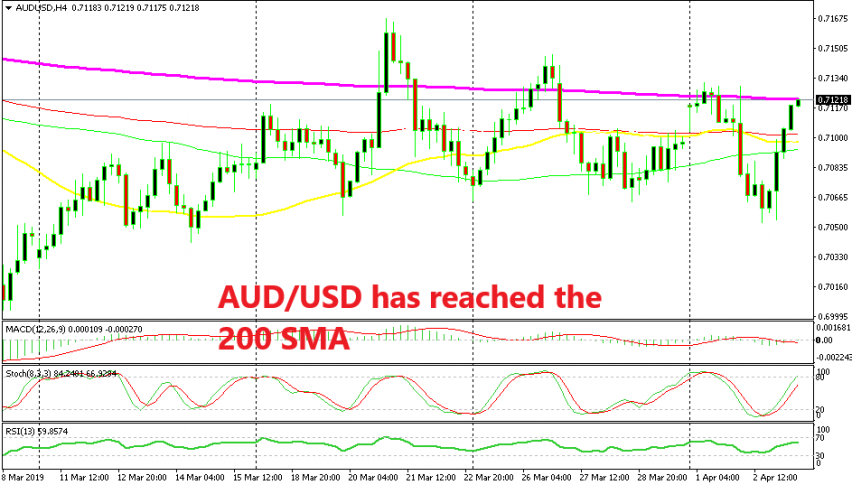 AUD/USD Back at this Place After Reversing on Improving Sentiment

AUD/USD is overbought as well now

Commodity Dollars started the week with a bullish gap higher as the Chinese manufacturing report over the weekend showed a reversal from the softening trend of the previous 3 months, with this sector turning to expansion again. But, they turned bearish as the week got underway and yesterday’s dovish remarks from the Reserve Bank of Australia sent the Aussie even lower, with NZD/USD following suit.

Yesterday, AUD/USD slipped to 0.7050 which has formed a support area around this, and today we saw this pair jump higher during the Asian session. The Australian retail sales report for February showed a 0.8% increase which is considerably higher than expectations of 0.3%, the trade balance also came better than expected, and the Chinese services PMI jumped higher as well.

That improved the sentiment generally in financial markets as the Chinese economy is reversing from the slowdown of the last several months, particularly for the Aussie. As a result, this pair is around 70 pips higher now. But, it has reached the 200 SMA (purple) now, which provided resistance at the beginning of the week.

The H4 chart is also overbought as stochastic shows, so the upside move might be coming to an end now. We have to follow the price action to see how it behaves up here at the 200 SMA. If it stalls and forms a bearish reversing signal, then we might decide to go short, but we also have to see how the sentiment turns in the coming hours because we don’t want to go against a strong buying sentiment.