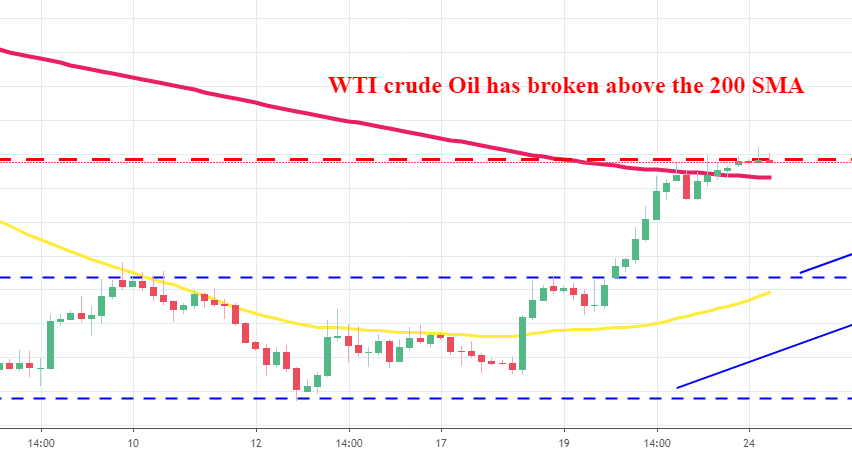 WTI Crude Oil Likely to Remain Supported Above the 200 SMA

The 200 SMA should turn into support now for WTI crude

Crude Oil has turned bullish in the last week, after being on a bearish since the end of May. The downtrend was quite steep and US WTI crude lost more than $15 until the beginning of this month when the decline stalled just about the big round level at $50. The decline stopped down there and the price trades sideways in a range for a couple of weeks until last week.

But the increasing geopolitical tensions between Iran and the US and the explosion of two Oil tankers in the Persian Gulf turned the sentiment bullish for Crude Oil and last week we saw US Crude Oil climb nearly $7. OPEC+ is expected to extend the production cut further which is also adding more fuel this uptrend.

The 50 SMA (yellow) which was providing resistance on the H4 chart and pushing the price lower was broken last week, which was a strong sign that the trend was shifting. The 200 SMA (purple) was also broken late on Friday and today the price opened with a small bullish gap. Now the 200 SMA will likely turn into support for WTI crude. Although, I don’t expect this to last too long, because the global economy is still slowing down, so once this climb will start to fade, we will look to sell Crude Oil long term.

The Test to Come for Cardano, As It Continues to Slide Down
2 days ago