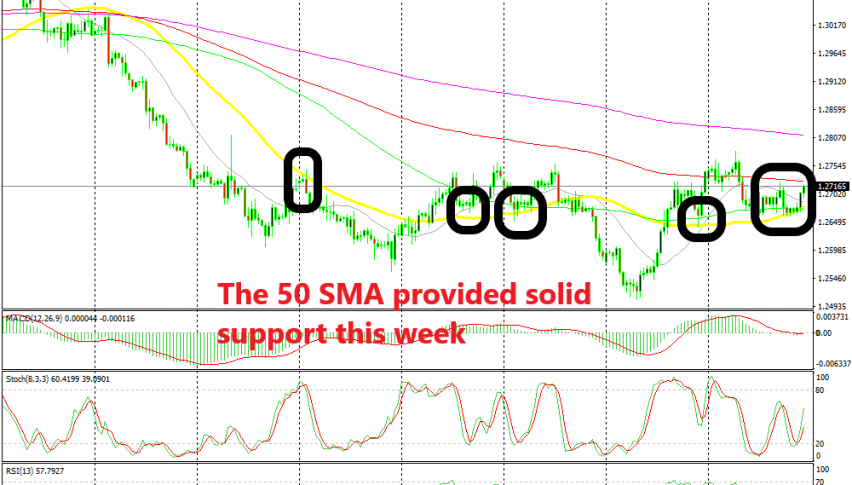 GBP/USD has bounced off the 50 SMA again

GBP/USD turned quite bullish last week, although that came from the USD side of the equation after the dovish FED meeting last Wednesday, because the GBP doesn’t really have any reason to rally. The price broke above the 50 SMA (yellow) on the H4 chart which acted as resistance on the way down in May and then turned into support in the first two weeks of this month before GBP/USD fell to 1.25.

The 50 SMA didn’t offer much resistance last week and the break confirmed the trend reversal in this pair. That moving average turned into support last Friday when the price turned down to try how strong the 50 SMA would be. the 50 SMA held on the bulls pushed the price above the 100 SMA (red).

GBP/USD turned bearish again Tuesday this week and lost more than 100 pips that day, but the 50 SMA turned into support again, this time also aided by the 100 simple MA (green). The price held above the 50 SMA all week and the bounce finally came today. There were some comments from Boris Johnson and other UK politicians today and they seem to have turned the sentiment positive for the GBP and now this pair is threatening the 100 smooth MA again, but there has also been some USD weakness in the last few hours, so this move is picking up momentum. I suppose we should have gone long on this pair this morning, but we already bought AUD/USD which has been bullish for longer, which makes it safer to buy.