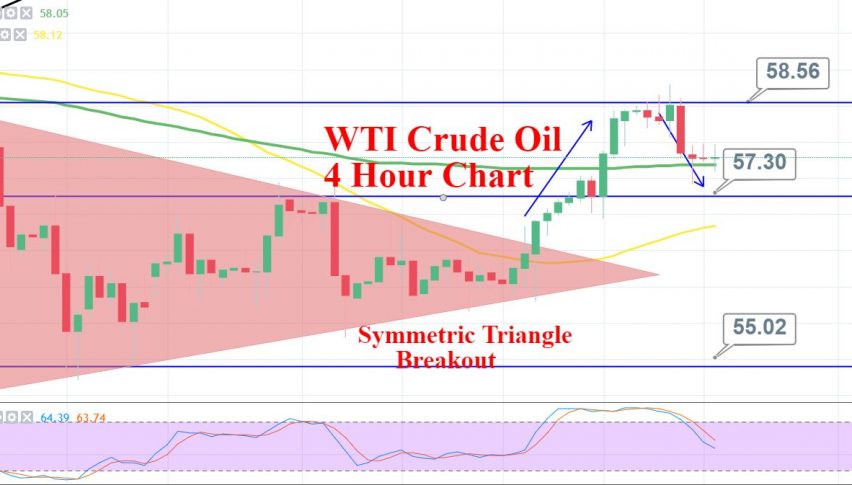 On Thursday, crude oil prices slipped from $58.56 to $57.75 during the Asian session. Oil prices are declining for the first time in six days after the US Federal Reserve depressed hopes for a string of interest rate cuts and after Sino-US talks ended without apparent progress towards closing a bitter trade dispute.

Well firstly, as we all know the US central bank has cut interest rates for the first time since 2008 but failed to impress President Donald Trump. President Trump, who had asked a huge rate cut, was unimpressed with the Federal Reserve’s 0.25% rate cut that took the federal fund’s target range to 2-2.25%.

Investors bought crude oil on hopes that the stronger rate cut could make the dollar weaker and make crude oil cheaper for foreigners. But actually the rate cut is only 0.25% and the statement was also less dovish than expected. Eventually, traders are buying back the US dollar which they earlier sold to “price in” the dovish FOMC. Stronger Dollar is now weighing on crude oil prices.

The negotiations between the United States and China, the world’s two biggest economies, wrapped up without evident signs of development and put off their subsequent meeting until September.

Lack of progress on a trade deal is putting China under jeopardy of further tariffs, which is a threat to crude oil demand from China.

US Oil has formed a bearish engulfing pattern on the 4-hour timeframe around 58.74 area which typically suggests sharp bearish intention among investors. Crude oil may find immediate support around 100 periods EMA at 57.30.

In fact, crude oil is forming doji and spinning top candles around 57.80 area, but the RSI is still pushing lower below 50 area, signaling a bearish trend in crude oil.

I will be looking to stay bearish below 58 to target 57.30 area. Alternatively, buying positions are suggested only above 58.20 today.