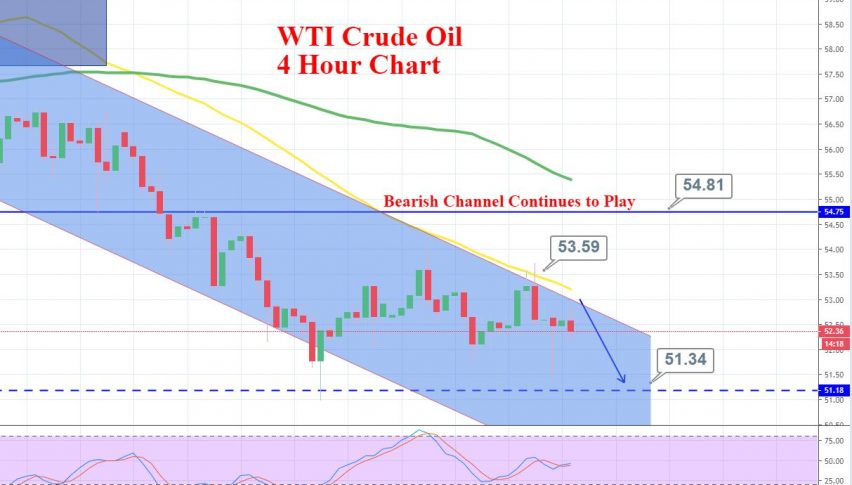 Earlier today, during the Asian session, WTI crude oil prices represented 0.1% losses due to the EIA data reporting an unexpected surge in crude oil stockpiles last week. The US Crude Oil WTI Futures inched down 0.1% to $52.53.

The Energy Information Administration recorded that WTI crude oil stockpiles increased by about 2.9 million barrels for the week ended 4 October versus the forecast figure of 1.4 million barrels.

WTI crude oil prices also traded bearishly on the day after the minutes from the Federal Reserve September meeting. As per the meeting minutes, the market is expecting further rate cuts than the Central bank deemed necessary to excite the economy.

The Federal Reserve has delivered two rate cuts back to back so far this year, in the wake of protecting the United States economy’s record decade-long growth. Market members anticipate the Federal Reserve to agree on another quarter-point rate cut when they meet on October 29-30.

Traders are also waiting for more details and certainty in the matter of the United States and China trade war. The market is still careful due to conflicting hints from both sides, as trade discussions continued this week.

The report came from multiple sources that China is still ready to make a deal with the United States if no more tariffs are imposed on Chinese goods. China also reportedly offered to increase purchases of agricultural products.

The technical side of crude oil remains the same as the black crack is still is encountering stiff resistance extended by the bearish channel at 53 level. The recent bearish engulfing pattern on the 4-hour chart is indicating the odds of a bearish reversal below the bearish trendline resistance area of 53. The violation of the bearish channel at 53.10 can extend buying until 54.70 while the support continues to stay at 52.50.