No Rest for AUD/USD, as MAs Keep it Bearish - Forex News by FX Leaders 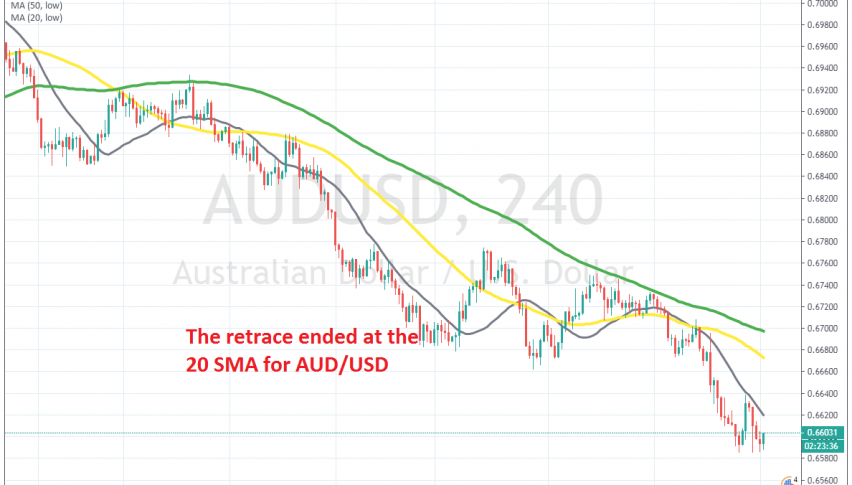 No Rest for AUD/USD, as MAs Keep it Bearish

Risk currencies have taken a big hit since early January as the sentiment turned negative in financial markets, turning commodity currencies bearish in return. They made a decent climb in Q4 of last year as the sentiment improved on prospects of Phase One deal between US and China, but the tensions in the Middle East, as well as the outbreak of coronavirus hurt the sentiment, especially for commodity Dollars.

As a result, AUD/USD has been bearish since the beginning of January, losing 450 pips from top to bottom. During this time, moving averages have turned into resistance, ending retraces higher and pushing AUD/USD lower. When the trend slowed and retraces were more substantial, the 100 SMA (green) has taken up that job.

When the trend has picked up pace, the 20 SMA has provided resistance. Last week, this pair made some new lows, but on Friday afternoon, we saw a retrace higher, as the market turned against the USD ahead of the weekend. But, the retrace ended right at the 20 SMA once again.

The price reversed down during the Asian session and is now trading near the lows. So, the trend remains bearish for AUD/USD and it is still quite strong, as the reverse at the 20 SMA shows. We missed the chance to sell AUD/USD at the 20 SMA, but will try to pick a trade if we see another pullback higher.