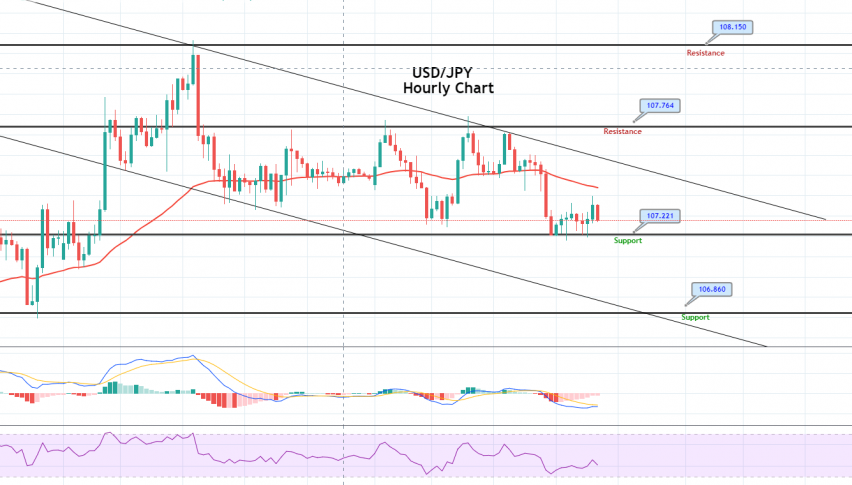 The USD/JPY pair closed at 107.257, after placing a high of 107.709 and a low of 107.200. Overall, the movement of the USD/JPY pair remained bearish throughout the day. On Wednesday, at the Department of Education, US Vice President Mike Pence claimed progress against COVID-19, even though infections topped the 3 Million mark. In response to the increased number of cases from Florida, Arizona and Texas, Mike Pence said that these were the early indications of an increased percentage of positive testing.

Pence joined President Trump in his push for reopening schools, as this was necessary, not just for educating kids but also to restore the workforce to normal, and to provide essential services. He also announced plans for new CDC guidelines after President Trump criticized the public health agency for its impractical instructions for the reopening of schools. Donald Trump warned schools on Wednesday, that if they do not open in the fall of 2020, due to coronavirus pandemic, he might cut off government funding. Pence said that the national death rate from the coronavirus was lower, compared to previously, and he said that early indications for positive testing from three major states were flattening. Pence and Trump’s statements pushed the equities back into an upward trend and decreased the demand for the safe-haven US dollar, pushing the US Dollar Index down to the 96.47 level, and adding to the downward trend of the USD/JPY.

US dollar was already under pressure, due to the rising number of coronavirus cases, and this affected the US economic outlook, as it was in a bitter struggle to fight the pandemic. This compromised the safe-haven status of the US dollar, causing the US dollar to lose its demand in the market, and dragging the USD/JPY pair down with it.

However, the safe-haven Japanese Yen was stronger against the US dollar, on the back of increased demand for safe-haven trading during uncertainty related to coronavirus and positive macroeconomic data from Japan on Wednesday, which helped add losses to the USD/JPY pair. On the data front, at 4:50 GMT, the Japanese Bank Lending for the year surged to 6.2% from the 5.0% that was forecast, lending support to the Japanese Yen, and ultimately pushing the already rising USD/JPY pair prices even further.

The USD/JPY pair is testing the double top pattern at a 107.828 resistance, while the support level holds at 107.280. A bullish breakout of 107.828 could lead the USD/JPY pair towards the next resistance area of 108. The 50 EMA suggests a bullish bias, along with MACD and RSI. Let’s look for buying trades over 107.820 and selling below the same today. Good luck!