The Trend Has Changed for EUR/USD After the FED, But the Real Test Comes at 1.17 - Forex News by FX Leaders

The Trend Has Changed for EUR/USD After the FED, But the Real Test Comes at 1.17

Jerome Powell turned course on Wednesday all of a sudden, the USD turned bullish immediately

EUR/USD was really resilient for more than a year, climbing up from 1.18. It moved to 1.2350 in the first wave in early January and hen retreated down to 1.17 as the USD buyers fought back. But, after the retreat in Q1, the bullish trend resumed again and EUR/USD pushed higher above 1.20 again and even above 1.21.

But, EUR/USD buyers couldn’t push above January’s highs, which was a bearish sign. This pair formed a doji candlestick on the weekly chart at the last week of May which was another bearish reversing signal and then reversed down.

The 50 weekly SMA has been broken in EUR/USD

The decline was slow in the first two weeks, but this week we saw a major dive, which took the price below 1.20 and to 1.1850. We have been short on this pair since early April as it was climbing higher, after bouncing off the 50 SMA, hoping the 1.20 area would hold as resistance and held the trade for weeks.

Now EUR/USD has reversed and the decline should be bigger, since the FED changed the rhetoric suddenly on Wednesday. We are more than 100 pips in profit now and are holding to our trade, at least until close to 1.17, since the situation seems to have changed fundamentally, as well as technically after the break of the 50 weekly SMA (yellow). The reversal is across the board in all USD pairs, so this looks sustainable, reversing the course from what was going on earlier on this pair, which we explained on our 2021 EUR/USD forecast. Below is the speech from Powell and the dot plot for the last two meeting, showing the difference.

This is the end of the ‘outcome-based Fed’. Powell is making all kinds projections about the coming months with an unusual amount of confidence that goes against what he’s been saying for months. It’s as if they saw something in the numbers and projections that spooked them. All that talk about letting inflation run hot and waiting to see numbers to ensure a ‘broad and inclusive’ recovery is dead.

The dot plot for the June FOMC meeting shows: 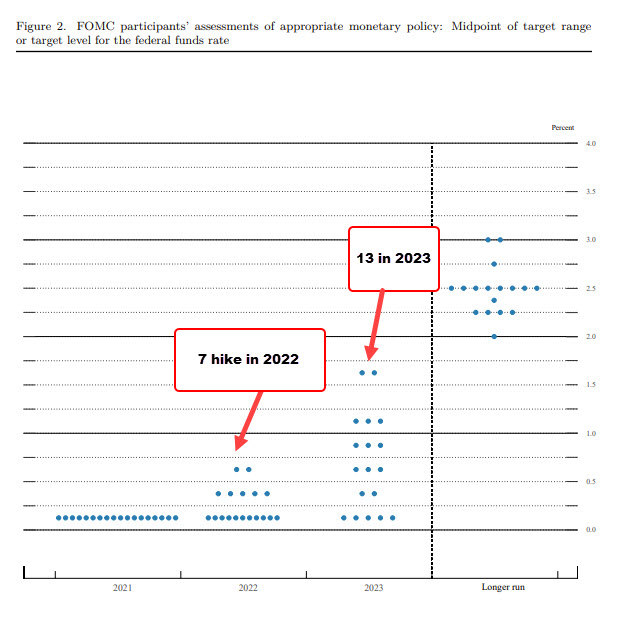 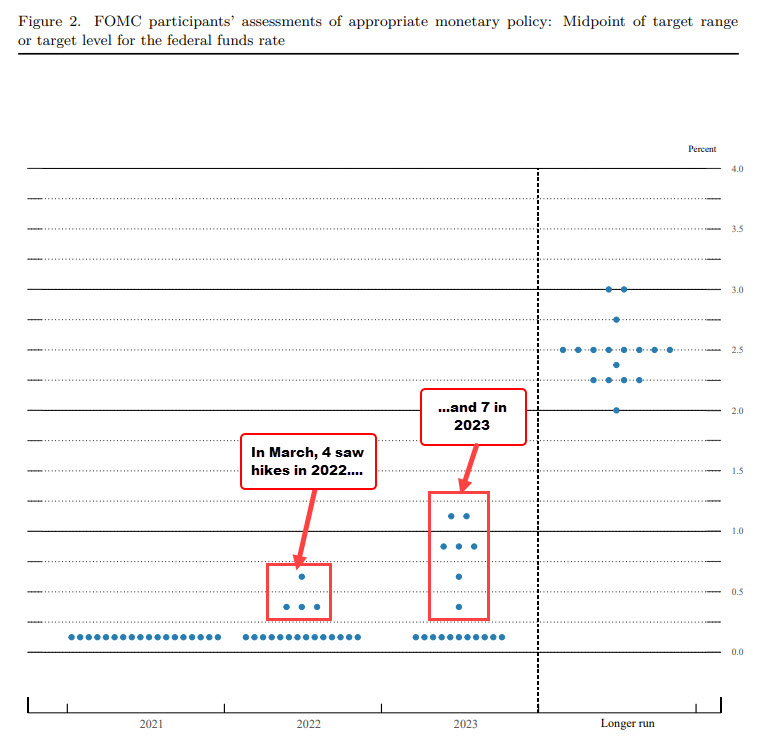