The BOJ (Bank of Japan) meeting minutes were released this morning. It is always interesting to see the chit-chat between the members of any central banks when it comes to the monetary policy, especially one week after the BOJ meeting. Remember that there were a lot of expectations before the meeting, but the outcome was dull.

So, what exactly did they talk about in that meeting? Were there any debates or opposing opinions? Did anyone have the guts to stand up to Kuroda?

Wait, these are not the September meeting minutes. These are the minutes from the July meeting. Does it take this long for the Japanese to publish something? All central banks´ minutes are outdated because they are usually released a few weeks after the meeting takes place, but it´s still interesting to see the comments, which give us a rough idea of the next meeting.

But two months is a lot of time, particularly when the next BOJ meeting is already over. A lot happens in forex in two months and a lot has happened since July. The BOJ revealed their monetary policy for the next several months, so this report seems ancient. All we heard in the July meeting was "expect something huge in the September meeting", but the BOJ didn´t deliver, so that report is not even worth the paper it´s written on. 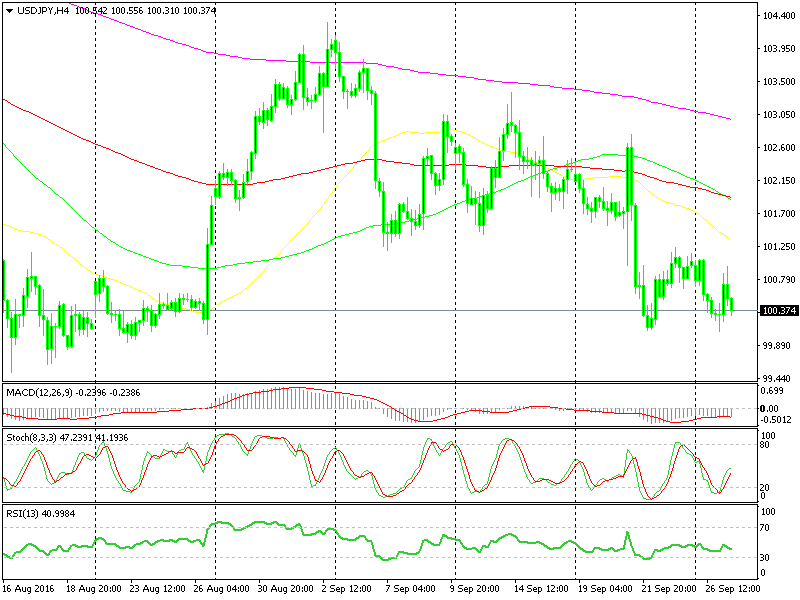 After a short-lived jump, the price is eyeing the 100 support level again for the 101st time

The Japanese Yen had a period of uncertainty overnight, but that wasn´t about the minutes. The US presidential debate and the market sentiment were the main drivers. The price in USD/JPY made yet another attempt to break the 100 support level but that level held its ground for the 100th time. The price surged for about 100 pips afterwards, probably due to Clinton´s slight advantage in the debate, but it reversed back down again and right now we are right where we were at the Tokyo open.