It´s that time of the week again… the time when we analyze what has happened in the financial world in general – and more specifically in the forex market – as well as calculating our profit/loss for the week. Usually, this is my favourite time of the week, particularly when we end up with good profit.

This week followed suit. We had a good run with our short-term forex signals this week and ended up with a 152 profit.  Also, this is the second week of this month that we have ended with a profit over 150 pips, so we´re on the right path to a great month.

The economic data was light and there weren´t many surprises to throw us off our trading plan. So, all in all, it has been a pretty relaxed and straightforward week, a rarity nowadays. As for Brexit, another chapter unfolded in front of us, but things still remain as they were last weekend. 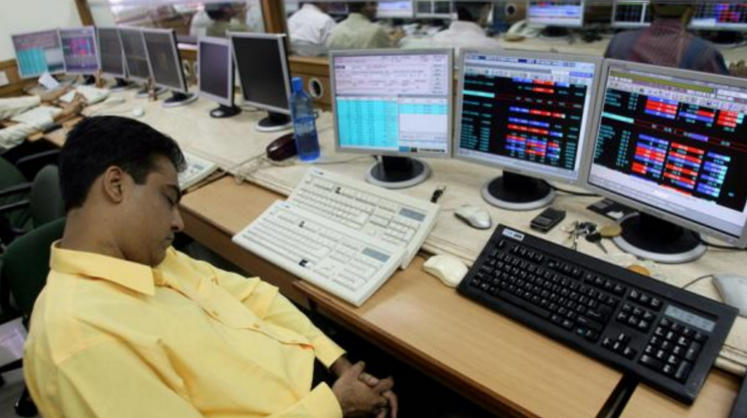 Turns out that boring meant a lot of pips for us

Some forex traders thrive when the volatility is elevated. Their trader personality works best in such market conditions. But, the market this week has been quiet, which is the best place for the more advanced traders.

Looking at our forex signals for the last two weeks, we see that all of them are short-term signals. We didn´t intend to use only these types of signals as our strategy during this period, but the market conditions imposed this upon us, so here we are now at the end of the second week with about 30 short-term forex signals and no long-term signal to be seen.

It´s easier to trade with short-term signals when the market is sleepy because it´s less likely to get whipsawed. Our performance from this and last week – when we made 152 and 186 pips respectively – reinforces this point of view.

We had a successful run in EUR/USD and AUD/USD, but the GBP pairs were the most profitable pairs for us. The GBP was on steroids for a couple of hours on Wednesday; after a few comments from the British PM it jumped about 250 pips, but we know this wouldn´t last. The market sentiment is extremely bearish towards the GBP, so we decided to pick a nice spot in EUR/GBP and GBP/USD in order to trade against them. Well, we ended up with four forex signals on Friday evening.

We tried again to have the perfect week with no losing signals, but a hiccup on Thursday ruined the plans for us. In total, we issued 14 forex signals this week and only lost three of them, so this gives us a 79:21 win/loss ratio.

I can´t say that we knew the volatility in forex was going to be low, but the signs were there from the beginning of the week. Japan and North America were off on Monday and the range that day was quite tight.

Yet, the bullish sentiment towards the US was evident, with the EUR/USD declining relentlessly and USD/JPY climbing without much resistance in the way. We couldn´t see any Euro and Yen buyers coming the entire day, so it meant that the market feared the USD strength. The lack of USD sellers kept pushing the buck higher, so it turned into a self-fulfilling prophecy… that´s just the way forex works.

Anyway, as the week went on the USD buyers gained more confidence. The positive economic data from the US and the hawkish comments from FED members provided more fuel for the buyers. The FOMC meeting minutes and rate hike talks also went in favour of the USD.

Eventually, EUR/USD pierced the 1.10 support level on Thursday, but it could only be considered as a proper break when the price closed below that level on Friday. This may open the door now for further declines. By the way, some financial analysts may attribute this USD strength of the last few weeks to the declining support of the US president candidate Trump, but whatever the reason, all we can do is ride the trend.

If you remember, in the early hours of Wednesday morning, the GBP pairs looked like they were on steroids for a little longer than an hour. The reason for that were the comments from the British PM spokesperson. British PM May backed down from leaving Parliament out of the Brexit process, promising to let them have a say.

That´s how the forex market took the comments at first, but then we all realized that nothing had changed and the GBP decline resumed. All that the parliament can do is discuss the EU/UK negotiating steps. The voices pro-Brexit grew further this week, which did not help the quid.

As we said in the opening paragraph, the economic data was very light this week. The important and very important data releases were far apart, but it showed that the US and the EU economies kept the trend of the last few weeks, and this is quite encouraging.

On Monday and Tuesday, we had a number of positive economic data releases from the Eurozone. The German trade balance, the Italian industrial production, and the Sentix investor confidence all beat expectations. That was followed on Tuesday by a jump in the German and EU ZEW economic sentiment.

That makes the picture a little brighter for the global economy, but it wasn´t the end all be all. The US unemployment claims fell below 250k this week which is a multi-year low, but that wasn´t a big surprise. The surprise came from the considerable jump in the producer inflation and retail sales. So, in this aspect, this was a positive week.

Since EUR/USD broke a long-term support level this week, I think that we´d better start with this forex pair. After consolidating in a 150 pip range last week, the price started to slide on Monday this week, which soon accelerated as the bearish sentiment grew. The 1.10 support level was pierced on Thursday, but the big break came only late on Friday afternoon. The bulls tried to put up a fight on Thursday, as the daily forex chart below shows, but the sellers piled back in and the 1.10 level couldn´t stop them from pushing the price lower. The weekly chart paints a very dovish picture for EUR/USD. This is the biggest bearish candlestick in about four months and there was no extraordinary event to cause this, so this shows the negative market sentiment towards this pair. The sellers couldn´t push above the 100 moving average (MA) in green, so the sellers took advantage of this and they broke the 50 moving average in yellow, which opens the door for 1.08 now and maybe 105 by yearend. 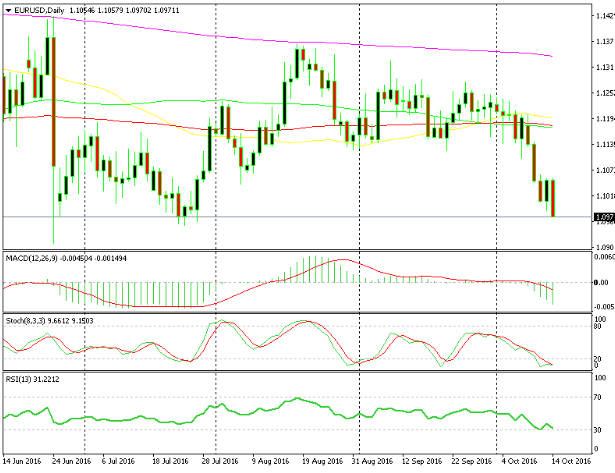 The selling has been relentless this week 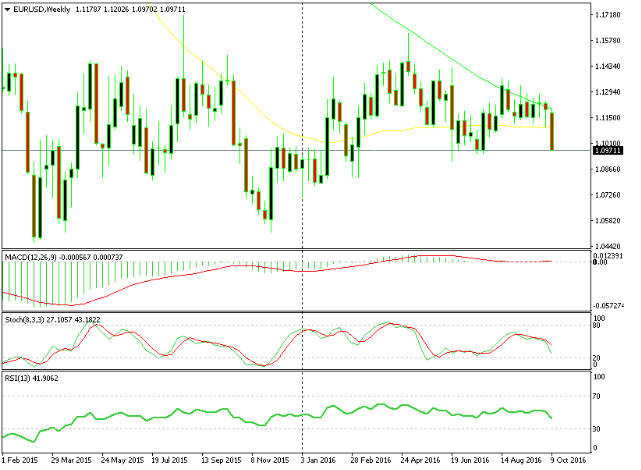 If you can’t break the upper MA, then the lower MA will have to go sooner or later

We closed the second week of October with a nice profit, and this puts us in a favourable place for a great finish. It´s still too early but we´re on the right track. We are just three weeks away from the US elections and the polls show that Clinton will take the presidential chair, which is another reason for the USD strength, recently. We expect the uptrend to continue next week as well for the USD, given there are no nasty surprises from the US inflation data on Tuesday. The ECB meeting is scheduled for Thursday, so we´ll keep an eye on that too. So, follow us next week guys for live market updates and analysis.

EUR/USD Remains Bullish Today AS ECB Presses on Strong Rate Hikes
3 hours ago
Getting Long on the USD, As FED's Bostic Mentions 75 and 50 bps Hikes
The FED is preparing markets for further strong rate hikes, which has been helping the USD but today we are seeing a strong retrace low
21 hours ago