As forex traders, we don´t really like when the politics interfere with the market. This is because the politics are very unpredictable and it can swing the market side to side within hours. Besides that, there are too many X’s and Y’s already in forex, which we have to figure out in order to solve the “successful trading” equation.

But, politics always interfere in every aspect of everyday life, so forex is not an exception. This week, the market was totally owned by politics, which of course made trading hell. Even the impressive US employment report on Friday was completely ignored by the market. In normal times, this sort of report would have sent the USD hundreds of pips higher for reasons we will explain further on.

So, this week was all about politics. The forex market was bullied by the US presidential elections campaign and the Brexit process, which took a strange turn on Thursday. As we now know, the UK High Court gave their verdict against the UK government, so Brexit must go through Parliament first. It doesn´t mean that Brexit is dead, far from that, but the Pound was quite happy about this vote.

Of course, the main theme this week was the US presidential campaign. It set the tone in the forex market from the first hour the Tokyo trading session started on Monday morning. Clinton´s FBI case re-opening and Trump´s advancement weighed heavily on the USD, but the neighbouring MXN (Mexican Peso) and CAD felt the heavy burden of a rising nationalistic threat the most. 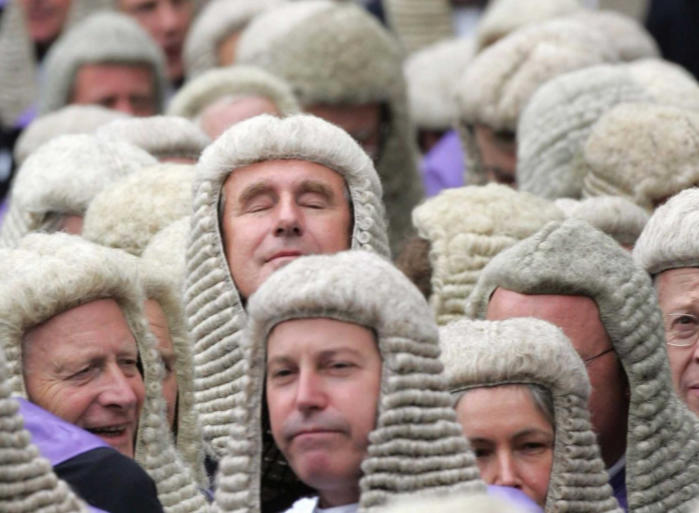 This was the week of the wigs, the UK High Court ruled against the UK government and Trump closed the gap with Clinton

We closed October with a nice 388 pip profit and left the market in a positive mood last week as a result of improved global economic conditions, so off to a relaxed start. But, forex traders must never get too relaxed, because the forex market can completely change in minutes.

That´s what happened this week and we received a good lesson from it. The US presidential campaign casted its dark shadow in the financial markets this week and the sentiment turned bearish all of a sudden. It came as a bit of a surprise and we got caught in the middle of it because when the FBI re-opened Clinton´s email case last week, the sentiment in the forex market remained positive.

But this week, the sentiment turned 180 degrees around and as we said, we didn´t expect that. So, we had a rough time in the first half of the week from losing six forex signals during the USD bashing. Market fear, position adjustment by forex traders, risk aversion, short covering before the elections etc., all reasons which sent the USD plunging several hundreds of pips lower.

We tried to adapt to this sort of trading environment by Thursday, but it was too late. We fought back on the remaining trading sessions on Thursday and Friday and recuperated half of the losses. However, we still closed the week 122 pips down.

Such market conditions make it hard for us traders in the short term, but it opens the door for some good long-term trading opportunities. The recent USD decline has taken several major forex pairs to some long-term support/resistance levels, so here come long term signals.

We opened one long-term sell forex signal this week in EUR/USD, but there are several more good opportunities hanging around. Still, the risk is too high until the elections are over. Wikileaks are releasing their latest Podesta emails over the weekend, so we might wake up on Monday morning with a 200 pip gap. If that´s the case, that would make these long-term opportunities a lot more tempting and the risk/reward ratio would be a lot better.  So, keep an eye on our long-term signals next week, because we´re looking to sell GBP/USD, NZD/USD and buy UDF/JPY and USD/CHF.

The Market This Week

Guess what… the FED meeting took place this week but the market didn´t even notice it. The US employment report on Friday was great but the market ignored that as well. How often does that happen? A week ago, when the market was trading the next FED rate hike, these two events would make us forex traders jump on the USD longs like lunatics.

But not now, not this week, the politics totally dominated the market. Last week, the FBI re-opened Clinton´s email case but the market took this lightly, maybe because the FBI headquarters are considered as a Trump stronghold. Although, over last weekend, Michelle Obama deleted all Clinton-related tweets and Wikileaks announced to publish more Podesta documents. I guess these had an effect on the US voters since Trump advanced considerably in the presidential race.

The market sentiment shifted from very positive in the last two months, to extremely negative. The risk appetite we saw in the last several weeks, turned into a massive risk aversion sentiment this week. The safe haven currencies of Japan and Switzerland, which benefit in such conditions, reversed and made up for all the losses they incurred during October. So there you go, a whole month of hard work undone in a few days.

That wasn´t all, though, the Brits took over their cousins from across the pond for a couple of days. About a week after the Northern Ireland High Court decided to let the Brexit process run its course, the UK High Court ruled against it. The UK government cannot trigger Article 50 without it passing through the British parliament first.

Of course, this does not mean that Brexit is over, far from it, but the market got excited nonetheless. This complicates things a lot for the UK which would normally be bearish for the GBP unless Brexit is cancelled, and this is not likely.

I say it would be bearish for the GBP and the UK in general because this might prolong the Brexit process and increase uncertainty. That would be the worst thing for the UK economy. I don´t think firms, particularly financial ones, will hang around in limbo for years. Anyway, the politics will continue to rule the forex world for the next couple of days until the US elections are over.

We had some important economic data releases this week, which would normally be a market changer, but the US elections and the UK High Court ruling were the elephants in the room. So, the economic data could not move the forex pairs a single pip. Nevertheless, this week´s numbers will have their say in the forex market once this political trading is over, so let´s have a quick look at it.

The global inflation has picked up, as the Eurozone inflation report showed on Monday. Too bad the final services PMI indicators missed expectations a few days later.

The situation seems better in the UK as well, despite all this Brexit nonsense. The housing numbers on Monday, the manufacturing data on Tuesday and the UK construction pm Wednesday showed that these sectors remain upbeat. But that wasn´t all, as the UK services PMI jumped higher too, and all these figures together played a part in the BOE decision to keep the interest rates unchanged this week.

We had some good news from the US as well this week. The US employment has been solid for ages now but the wages/salaries have remained weak, as the FED has often pointed out. On Friday though, the pickup in the hourly earnings must have made the guys at the FED very happy, but as we know the market was concentrated on other things, so that report was completely ignored.

As we mentioned in the signals section, the recent USD moves have taken the major forex pairs close to some important levels. The Swiss Franc found its feet again amid risk aversion sentiment and USD/CHF lost more than 200 pips. That has taken the price below the 200 smooth moving average (200 SMA) in the daily forex chart of this pair. The stochastic and RSI indicators are already oversold which is a buy signal for a long-term trade. That said, if we switch to the weekly chart, we can see that Stochastic is heading down with some more room to go until it reaches oversold levels. Besides that, we need to continue down for another 100 pips before reaching the 100 SMA in red which has provided solid support during all this year. So, we have decided to wait until Tuesday or Wednesday until the US elections are over before jumping in. 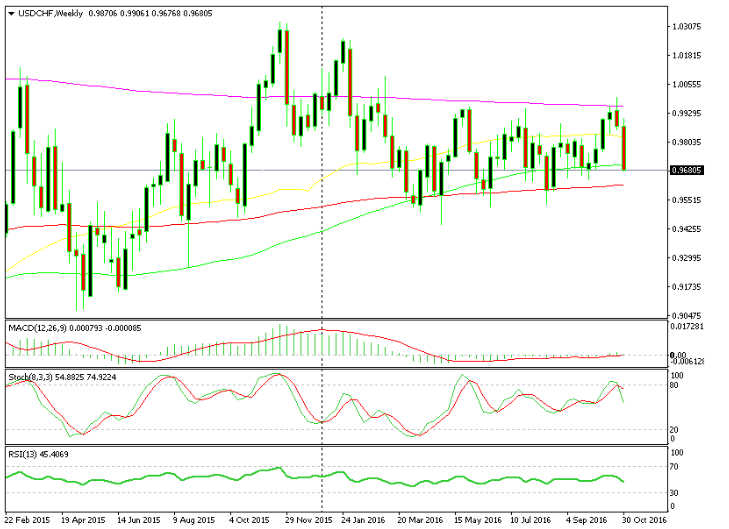 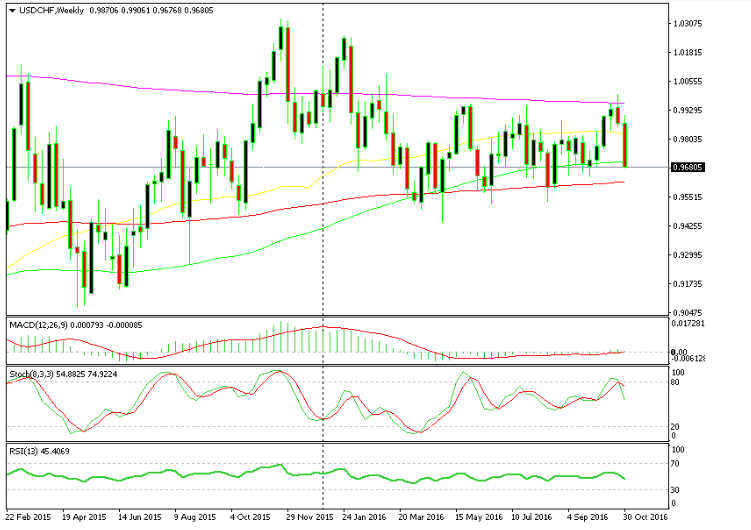 As we mentioned many times above, the market sentiment was really negative, but at least the week is over. Although, we expect this sort of sentiment to continue until the election day on Tuesday. That said if Trump wins the USD will enter a similar path with the one the GBP has taken since the Brexit referendum. But we´ll have bigger things to worry about if he wins.

Speaking of Brexit, the UK High Court has blurred the future somewhat. The case will be appealed to the Supreme Court in December, but if the ruling remains then the Brexit process will be prolonged for a bit. Interesting times!
Check out our free forex signals
Follow the top economic events on FX Leaders economic calendar
Trade better, discover more Forex Trading Strategies