Are You Following the US Elections … and the Forex Market? - Forex News by FX Leaders

Are You Following the US Elections … and the Forex Market?

The US citizens started voting about 7 hours ago but there´s still some more time to go until we get the first exit polls. Some surveyors put Clinton 4 points ahead at 47% against Trump´s 43% but there´s still a long way to go. One thing to notice is that Clinton leads Florida and Ohio, which are probably the two most important of the 4-5 swing states, particularly Florida.

If you are following our forex signals, then you are long USD on two long term trades, against the Euro and the CHF. As we said in the previous update, the Swiss Franc is being stubborn and it´s not reacting as it should in this risk on environment, but the EUR/USD sell signal is going in the right direction. By the way, I suggest that you move the stop loss in this forex signal at breakeven; we´ll explain the reasons further in this update. 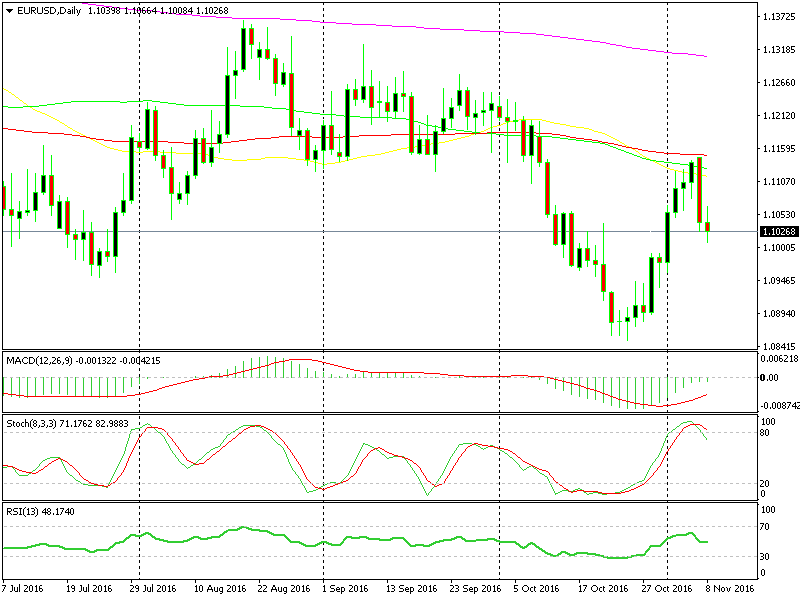 Being more than 50 pips in profit, we have the luxury to bring the stop loss to breakeven

The main reason is that the odd scenario where Trump wins might come true. If it does, then don´t expect to see the USD at these levels anytime soon (years). It will be a big surprise because a large part of the market expects Clinton to win.

Besides that, based on trump´s comments the uncertainty about the future global trade will be immense and the FED rate hike odds for December will take a nosedive. So, I think that this forex pair will head towards 1.20 if this scenario happens, therefore a 100-200 pip stop loss will be useless. You can as well cut the trade as soon as possible if you find yourself on the wrong side. We might do just that with our EUR/USD and USD/CHF forex signals if we see signs of Trump winning.

But, the probabilities favour Clinton. So, if this more likely scenario is to take place, then we can see 1.0850 in the next few trading sessions. In the longer term (1-2 months), I see this pair heading even lower to 1.07 and 1.06, because the Euro side of the trade falls in line with our bearish bias.

Today, some ECB (European Central Bank) official confirmed that the ECB will carry on with the QE programme, so unless something extraordinary happens in Europe, there won´t be any limit to the downside.

We are leaving you guys for today, but we´ll be back with you tomorrow morning after the carnage is over. Hopefully, we wake up with a nice big bonus from our open signals. By the way, follow the headlines but don´t get too sucked in on them, particularly the early ones.

Can EUR/USD Fall Back to Parity After Failing at 1.05?
4 days ago