Eurozone Inflation and Construction Data No Tapering From the ECB Then

The Eurozone has gone through a decade of very weak economic recovery since the 2008 GFC (global financial crisis) happened, often falling in recession or just stagnating for a few months. In the last few months though, the EU economic data has shown a notable pickup in most of the sectors, so the ECB QE (Quantitative Easing) programme must have worked, right?

Today´s numbers from the single market bring another twist to the Euro traders. This morning, the Q3 French unemployment rate, which we forgot to mention, jumped to 10% from 9.9% previously. That´s the first increase in the unemployment rate since a year ago and that´s not a good thing obviously, particularly for the French President, Hollande, who is facing elections next year.

The mainland unemployment is a tad lower but it ticked higher too, from 9.6% to 9.7%. Remember that there are about 3 million people living in French overseas territories, mostly in Central America, such as French Guyana.

The yearly inflation in the Eurozone remained unchanged at 0.5% and 0.8%, respectively for the main and the core CPI (consumer price index) number.

However, the monthly numbers ticked down one point. This is not a bad inflation report, but it doesn´t scream tighter monetary policy either. 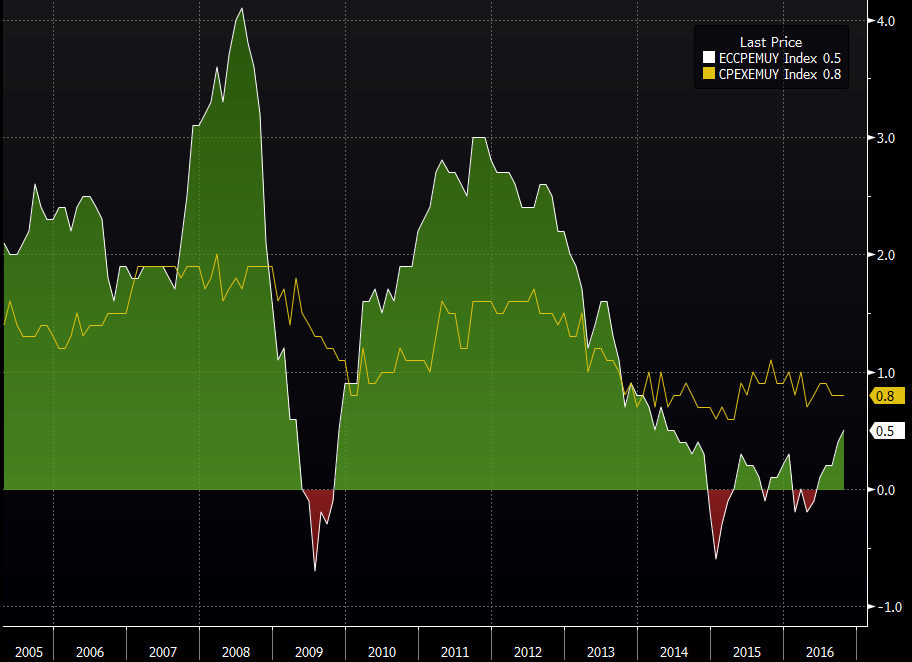 At least we left behind the deflationary times

So, don´t expect the ECB to start talking tapering anytime soon. In fact, as we pointed out in our first update today, the ECB is going the other direction; they're trying to convince the markets that the loose monetary policy will continue for as long as it takes to sort the European economy out.

Personally, with general elections in France, Germany, The Netherlands, and probably Italy as well, I can´t see the ECB making the mistake to tighten their policy by tapering the QE programme or hiking the interest rates. Not when the EU construction output declined 0.9% in September. The previous data was revised higher too, but that´s not exactly the sort of number to suggest a rate hike