EUR/USD – No Rest for the Wicked

Yesterday, EUR/USD made its next leg of this downtrend, which started last Wednesday when Donald Trump was announced the winner of the US elections. The 1.0650 level was finally broken but the price stalled at 1.0620 before of the big support level at 1.06.

We know that usually round numbers such as 1.06 or 1.07 turn into support/resistance levels, but the .80 and .20 levels are the ones where the price tops or bottoms out. Although the resistance level in this forex pair was at 1.06, the price stalled at 1.0620 yesterday and at 1.0680 today, so there you go.

These levels turn into swing high/low during strong trends due to stop hunting. When weak stops which are placed just below the round number (1.0598, for instance) get triggered, then the price stalls or reverses back up/down.

So, this morning EUR/USD touched 1.0582 and stopped right there after flushing out the weak stops. Now the price has retraced up to 1.0620s, but the break of the 1.06 support level is valid. Whatever bids there might have been around this level to protect it are now triggered, thus making them expire. The Euro sellers had a taste of this support level this morning so they're not scared to take on it one more time. 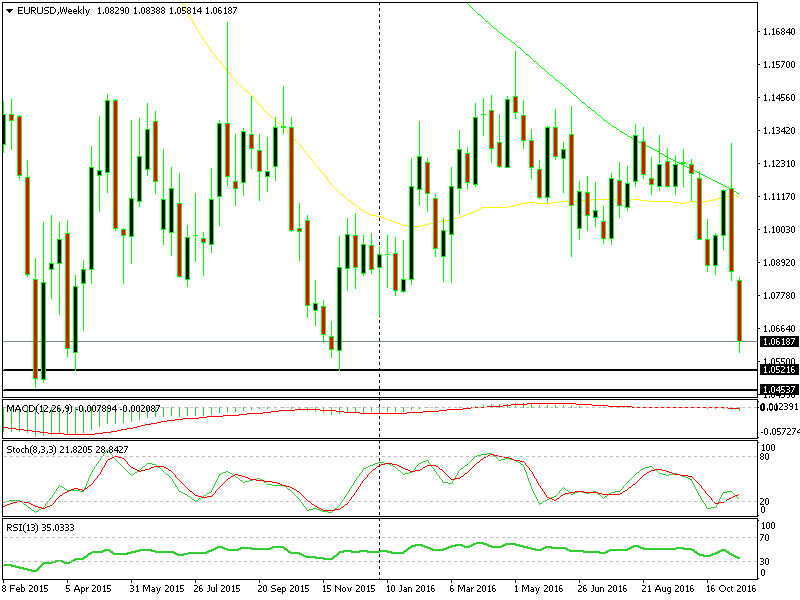 The next targets don´t seem too far now, do they?

We're not that far now and we're headed in that direction, so we might as well see these levels come into play in a few hours. As my colleague Eric pointed out this morning, this has been such a strong run for the USD for a number of reasons which we highlighted in last week's review. The election uncertainties are over, Trump's fiscal plan is ambitious, he has all “his” party on board, etc.

Besides that, the Euro side is not helping this forex pair much. The ECB is set to continue its QE programme for as long as it takes for the EU economy to get back on its feet and president Draghi didn't offer anything to chew on to the Euro buyers. There were hopes last night for some kind of hint from Draghi regarding the end of the QE programme, but nothing from the Master.

So in my opinion, better stay out of EUR/USD longs until this downtrend ends and the price settles. Perhaps last year's low at 1.0450 will be that place, we'll see.

EUR/GBP to Reverse at Support After Positive European Manufacturing?
2 weeks ago