As you might have seen in our long-term signals section, we opened a buy position in EUR/CHF about two weeks ago, from what I can recall. This pair was testing our nerves as it took about a week to start moving and get out of a tight range in the low 1.07 but at long last, it started moving.

The first sign that sooner or later this forex pair would move higher came more than a week ago when the SNB (Swiss National Bank) was intervening near 1.07. We posted an update about this during that time. So, it started moving and at some point last week, it reached 1.0817.

We were excited since our EUR/CHF signal was nearly 100 pip in profit, but the Italian constitutional referendum on Sunday sent the price tumbling again as forex traders ran for safety in the safe haven currencies. It dipped again below 1.07 but the SNB got in the frame again. It started buying at around 1.07 which is the line in the sand for the SNB.

The market sentiment for the Euro gave a big hand to the SNB as well, as it reversed 180 degrees in  few hours and sent EUR/USD about 300 pips higher yesterday. The tail, which is EUR/CHF, followed the dog, which is EUR/USD, and by the end of the day, our forex signal was more than 100 pips in profit. 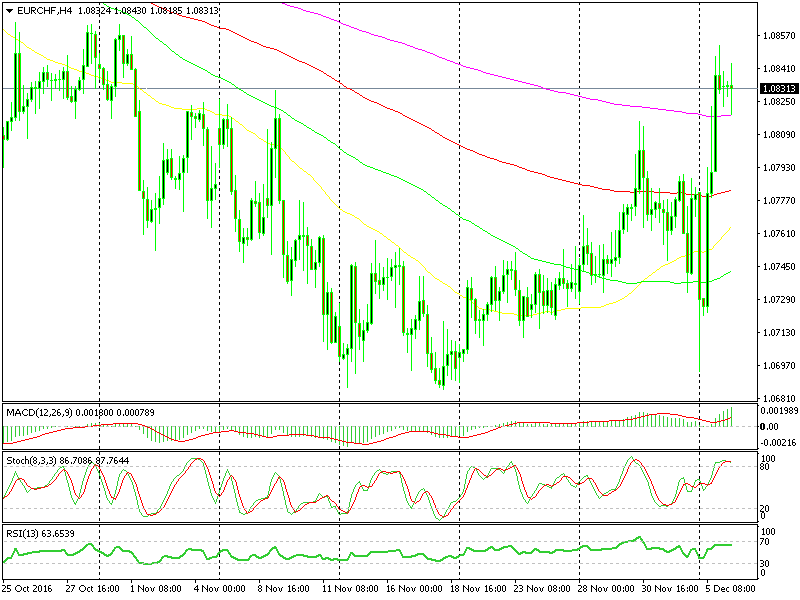 The 200 SMA provided support this morning.

The price made a retracement overnight but the 200 smooth moving average (200 SMA) on the H4 EUR/CHF chart held the price up and the buyers are pushing higher again as I speak. On this time frame chart, the picture seems pretty bullish, but on the daily chart, we can see that the upside won´t be that easy, according to technical analysis. 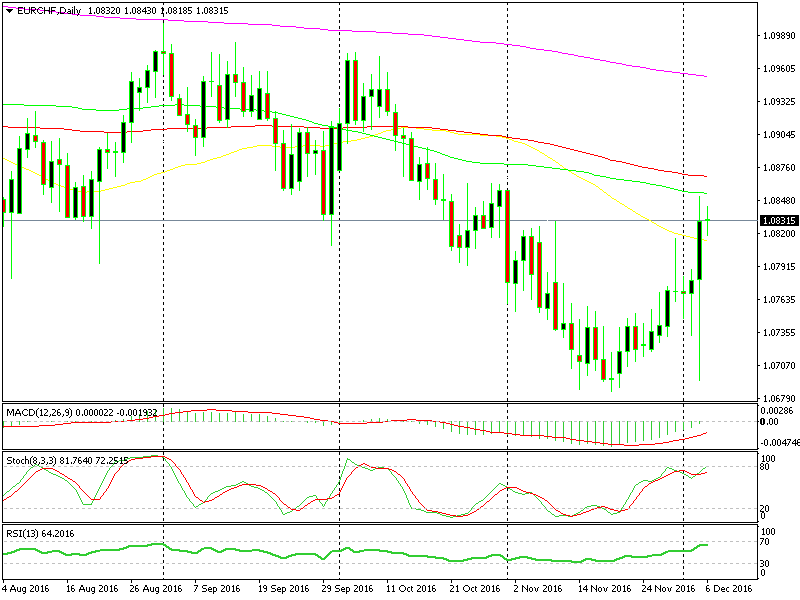 The 100 simple and smooth MAs are considerable obstacles on the top side.

The green 100 simple MA and the red smooth MA are right on top of this move, so they will have to overcome first before aiming for the 200 SMA which is standing around 200 pips higher. The preferred TP target for me would be 1.0950 to 1.10, but if the price finds it too difficult around here, then we might as well close this forex signal and wait for a retrace before jumping in with another long term EUR/CHF signal.