At last, a decisive day for dollar has come as investors await the U.S. employment data (NFP) due later today in the U.S session. It will be the indication to the timing of the Federal Reserve's next interest rate hike in the coming months.

In the Asian trade session on Friday, the dollar still held the strong support level even after the release of FOMC market interest rates data and inconsiderate executive decisions taken within the last 2-weeks.

The Dollar continued to tumble since the start of January but manage to hold an exceeding strong support level range at 99.40 – 100. Although the dollar has been poised enough to get weaker, the fundamentals are supporting the Greenback at this level of 99.40.

Important data is to come later this day, such as the average hourly earnings, the unemployment rate and revisions.

If the Non-farm Payroll data rises more than expected at 175K, as forecasted, and the average hourly earnings growth holds firm or pick up pace, then the dollar will soar with the USD/JPY pair to mark a high above 114.

More likely, based on some previous years of NFP data, Non-farm Payrolls always start to surge at a considerable pace by the month of January after Christmas and New Year holidays.

As a part of the election campaign promises, President Trump is on the brink to impose new sanctions on Iran. President Trump had frequently criticized the Iran nuclear deal, calling the agreement weak and ineffective. Moreover, tension between the United States and Tehran is also rising after Iran tested a ballistic missile, raising the possibility of future sanctions.

The U.S. dollar index, which tracks the U.S. currency against a basket of six major rivals, edged slightly higher to 99.80, after making a bottom of 99.30 yesterday. However, looks tentative before NFP.

Let’s watch the U.S. dollar index 4-hr chart given below. 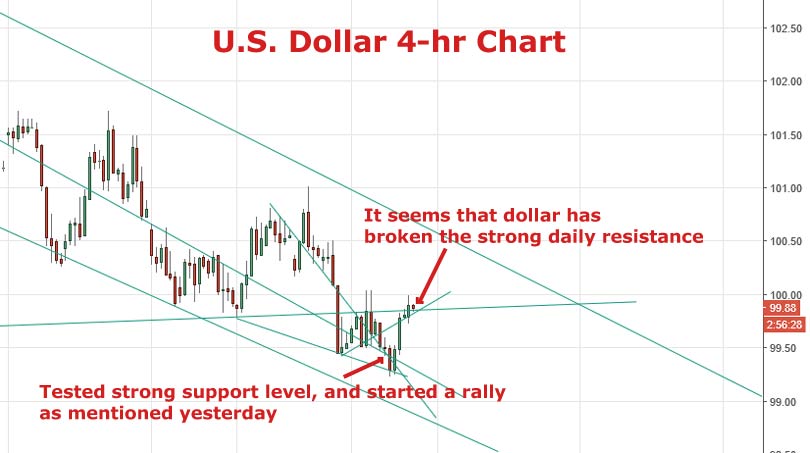 This is the U.S. dollar index 4-hr chart.

I have been stating since the start of this week that the dollar upside prevails. It still holds the strong support level in monthly and daily chart as well. Although the market remains cautious, it was expected because the FOMC and NFP has to draw future directions while they continue to consolidate at a strong support level or range of 99.40-100. Let’s hope for a good Non-farm Payroll data to make this week-end with bullish biased.

Asian stocks got off to a tentative start on Friday, as investors await the outcome of the key U.S. Non-farm Payroll data that will set the tone for the Federal Reserve's policy outlook. It's important to see the impact of China's markets that are reopen after the week-long holidays.

Nikkei 225 index opened higher with a gap on Friday, while the Yen is taking a breather as investors wait for key US jobs data to be released later in the day.

The Nikkei average dropped 0.07% percent to 18,926.64 before the close of Tokyo session, after making a high of 19,061 by early morning, wiping out all of its early gains made this morning. However, what is still holding a strong support level this week, as mentioned earlier, is the Nikkei 225 analysis.

In the currency market, the U.S. dollar traded in the mid 112 Yen-range on Friday.

In the oil space, Inpex is up 0.2 percent and JX Holdings is rising 0.6 percent as crude oil prices rose in Asian trades.

MSCI's index of Asia-Pacific shares outside of Japan was flat after touching its highest level since mid-October in the previous session. Morning trade in the markets, such as Australia, was broadly steady, while Japan's Nikkei shares average was up 0.07 percent.

China's markets reopened trade after a week long holiday with investors wary that a slowing economy may force investors to lock in profits. In Hong Kong, the benchmark index (HIS) fell on Thursday and was led by property firms and casino companies.

Let’s watch the Nikkei 225 index 4-hr chart given below.

As per routine on the last day of trading, investors might like to book their profit before the weekend. Investors awaited NFP data in order to track future direction. The drop in Nikkei this morning is just to deceive market investors, although the Nikkei is still respecting the strong support level within range of 18800-19000. It’s a test of strong support level in order to produce upside rally. In-fact, the dollar is suppose to be bullish later today. Let’s see.

The market remains cautious and high volatility, which is expected during that session. So be careful and have a good weekend.

A trade calls from yesterday analysis: