Gold Before & After FOMC – A New Trade Setup

Overnight, the precious metal Gold encountered a massive sell-off due to the hawkish FOMC statement. Earlier in the Asian and European sessions, the Gold was holding above a major support area of $1250. However, later in the New York session, the prices fell more than 200 pips in a single trading session. The bearish momentum doesn't seem to be over yet as the gold prices have fallen to $1235 in the European session today.

2 Major Reasons Behind The Bearish Gold

First, as we already know, there is a negative correlation between Gold and the U.S. dollar. Any fundamental that strengthens the greenback also weakens the Gold prices.

Nonetheless, the Federal Open Market Committee (FOMC) exhibited a hawkish stance by downplaying the lack of economic growth and highlighting that inflation is on track to hit the target level of 2%. As a result, investors suddenly shifted their investments from the yellow metal Gold to the U.S. dollar.

Second, on the 4-hour chart, we can see a double top resistance level of $1249 which later worked as a support level for the bullion. At this point, the metal is trading at $1234 and is very oversold. Nonetheless, investors are unlikely to stop selling it.

The lagging indicator, 50 periods moving average is signaling a bearish bias for the Gold. 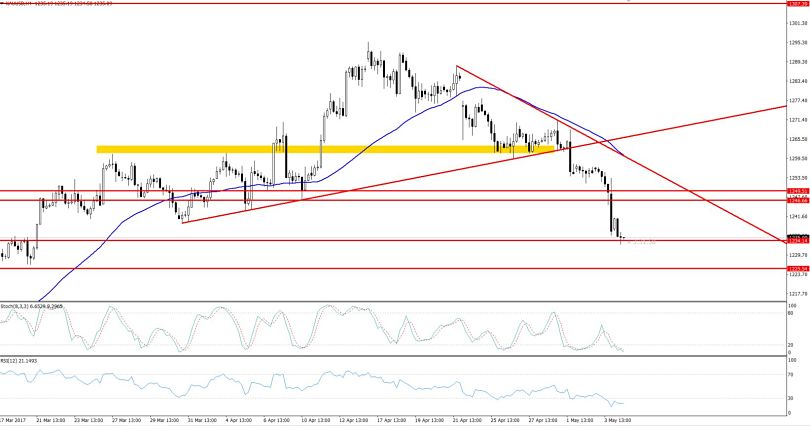 For now, I'm looking to add a sell below $1235 with a stop loss above $1238 and take profit at $1225. The market seems a bit unpredictable today due to the major news NFP coming up on Friday. The best idea is to secure your trade once it shows green pips.