It’s been a slow week as anticipation and speculation around what will happen at Jackson Hole continued to grow. But the big day has finally arrived! Get ready for fireworks today as our two stars, ECB President Mario Draghi and US Federal Reserve Chairman Janet Yellen, get ready to give their remarks.?

As proceedings kicked off we heard a couple of points of interest which included Dallas Fed President Rob Kaplan suggesting a market correction wouldn't necessarily be all that bad and Kansas City Fed President Esther George saying that a secondary aim of policy has been to bolster asset prices. FX markets didn’t seem too phased by the comments and continued in their holding pattern before the big names take center stage.

As I mentioned yesterday, Jackson Hole has been a place where Central Bankers have made some important statements on monetary policy in the past. If you’re prepared and have done your homework then there’s the potential to make some tidy returns in FX markets. I’ll do a quick recap of last year to show you what I mean. 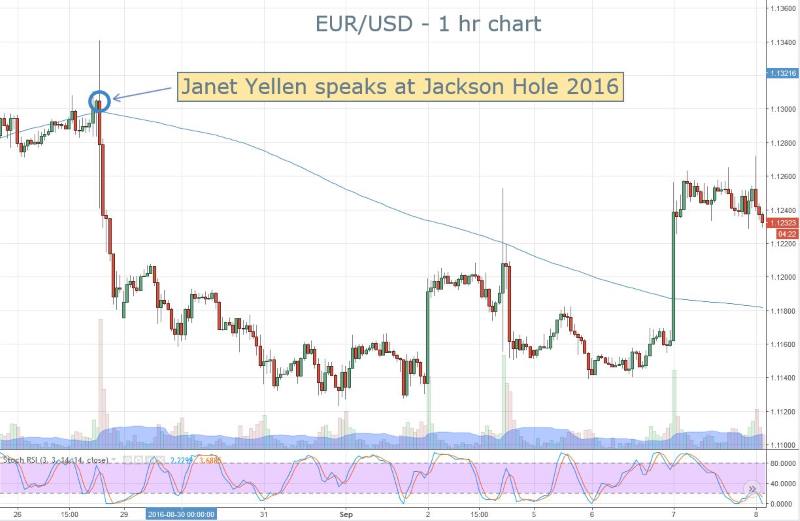 In the lead up to Jackson Hole 2016, there was a sharp focus on Janet Yellen and the Fed’s plans to raise US interest rates. Rates had been at record low levels and markets were ripe with anticipation. There had been one rate rise prior to Yellen's speech but the market had been predicting on the way.

In her speech Yellen said the case for rate rises had “strengthened” but she gave little away on the timing, saying they would be “gradual” and happen “over time”. Certainly nothing too significant. However, we saw a sharp reaction in the EUR/USD, with strength coming into the USD as we might expect.

What’s interesting to note is the amount of follow through that we saw. For the few hours following her comments, the USD continued to strengthen. We saw a pop as high as 1.1340 before selling off all the way down to 1.1200. This goes to show us that there is plenty of opportunity to ride any momentum regardless of the direction.

I don’t know about you, but that’s a lot of pips for the taking!

The two speakers of interest take the stage today in what are highly anticipated events.

The Fed Chairman will be speaking about financial stability. Listen for any kind of insight on the state of the US economy after the rate hikes and what might be in store going forward.

Traders want to know about the ECB's asset purchasing program Any hint of a change might be enough to spark some big moves. “Inside sources”, claim there won’t be anything new coming from Draghi, but let’s take that with a grain of salt for the time being.

German GDP is set to be released at 6:00 GMT and analysts are predicting a 0.6% increase which is the same as last month. The German economy plays a significant role in the fate of the Euro. Positive change shows the German economy is growing and this will strengthen EUR/USD.

The German Ifo Business Climate Index is set for release at 8:00 GMT and analysts are predicting 115.5, slightly lower than the previous reading of 116. The Index is a survey that measure business conditions in Germany and any increase should strengthen EUR/USD.

Our strategy today is all about the news. All that we are focused on is what Mario Draghi and Janet Yellen will say and what the fundamental implications are for EUR/USD.

The best course of action is to simply trade with momentum because as we saw from last years symposium, there is the potential for a significant and prolonged directional move.

Basically, that means more pips headed into your account! 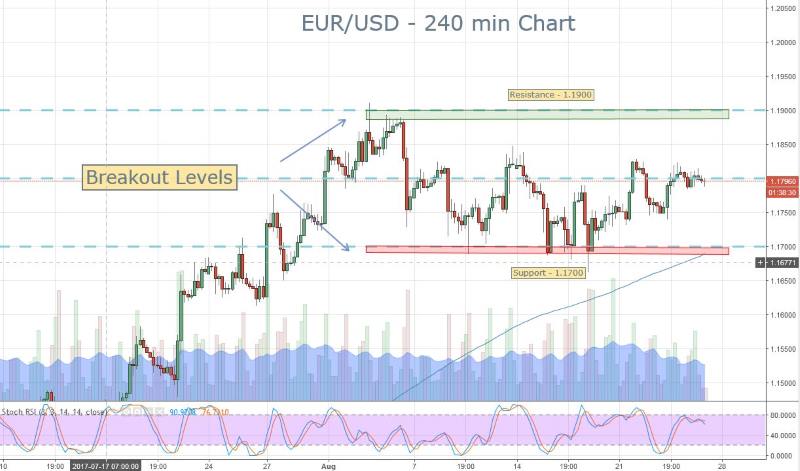 Like we saw from the chart at the start of the preview, big moves can happen when people say things at Jackson Hole. For now, the plan is to simply go with whatever the momentum might be.

If we break key levels, in the case of the EUR/USD that’s 1.1700 and 1.1900, and get a bit of a pullback, then that’s probably our best opportunity to enter. If the news is significant, then the move can be extended over a few hours prolonging the opportunity to enter.

If you can’t sit around waiting on Mario Draghi and Janet Yellen every word, be sure to keep our signals page open as our team will be updating as we go along with many great opportunities, not just in the EUR/USD but across the board.

Best of luck in what is hopefully a profitable day in the FX markets.