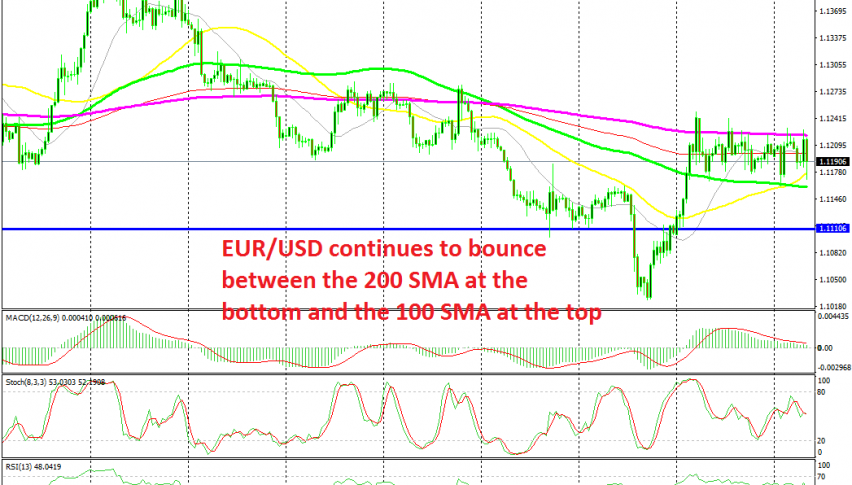 The range has been going on for more than a week

EUR/USD turned bearish at the end of June as the one month decline in the USD came to an end. The price fell lower but it stopped at 1.11 which has offered a support area for this pair since late last year. After finding support again at that zone for a few days, the sellers finally managed to push below it two weeks ago after the FED only cut rates by 25 bps.

But this time it was the 1.10 level which offered a support area and the price reversed higher in the following days, climbing back above 1.12. Buyers pierced the 200 SMA (purple) last week, but the price slipped back below it and has traded below the 200 SMA since then, apart from the occasional piercing.

Sellers have tried several times to turn this pair bearish, but EUR/USD has put a bottom in place at 1.1160s. That’s where the 100 SMA (green) comes. This moving average, together with the 50 SMA (yellow) have turned into strong support for EUR/USD, so this pair has been bouncing 50-60 pips up and down for more than a week and it looks like a nice channel to trade. We went short at the 200 SMA earlier and booked profit a while ago. I am following this pair in order to buy at the bottom at the 100 SMA.

Forex & Commodities Trading Levels to Watch on Wednesday
6 hours ago

Dollar Starts to Steady after Dropping for Weeks
20 hours ago