Last week on Friday, the US dollar slipped lower, giving up gains stoked by a generally reliable US labor market report that somewhat underperformed economists’ forecasts. Investors seem to be worried about political risks in the United States and continuing trade talks with China.

The US dollar placed a session highs versus its peers, especially against the Japanese yen and euro following the jobs report. However, the bullish trend in the dollar faded on the release of NFP figures. The greenback slipped roughly 1% versus the yen this week, its poorest weekly percentage drop in two months.

Speaking of the US NFP figures, the figures advanced by 136,000 last month. August’s data was altered to exhibit 168,000 jobs created instead of the previously announced 130,000. Economists surveyed by Reuters had anticipated payrolls would expand by 145,000 jobs in September, but the data disappointed the market slightly.

However, the good thing that has happened on Friday is that the US unemployment rate fell to near a 50-year low of 3.5%. In the coming week, the market may continue to price in stronger unemployment rate figures, keeping the dollar supported.

At about 15:00 GMT, the Federal Reserve Chair Jerome Powell is due to participate in a panel discussion at the Fed Listens, an event hosted by the Federal Reserve Bank of Kansas City. Audience questions are expected, but it may not help drive volatility, and traders will be eyeing on the more significant event like FOMC Meeting Minutes.

It’s a detailed record of the FOMC’s most recent meeting, providing in-depth insights into the economic and financial conditions that influenced their vote on where to set interest rates.

The minutes from the September conference may shed some light on the the world’s most influential central bank.

The Fed voted to lower rates for the second consecutive time and denied to mention if more interest rate cuts are imminent. Out of nine members of FOMC, thee officials voted against the unanimous verdict.

Traders will be looking to find clues on the next policy decision and if central bank signals hint at further rate cuts.

The Office for National Statistics is due to report Gross Domestic Product figures for the United Kingdom. For newbies, it’s the broadest measure of economic activity and the primary gauge of the economy’s health, and reports a change in the total value of all goods and services produced by the economy.

The British economy expanded by 0.3% in July following a deterioration and shrinking in the second quarter. The forthcoming release is for August, and it was the first month of Boris Johnson as prime minister. It will be intriguing to see if the economy remains building — in line with optimistic employment numbers — or experiences from Brexit risk.

As per economists’ forecast, the GDP growth rate of 0.0% is on the cards, which are below 0.3% prehand figure. Sterling may trade under bearish pressure this week.

The European Central Bank is due to release minutes of Monetary Policy Meeting from ECB’s last policy decision, which recorded a decision to lower the deposit rate to -0.50% and to initiate further bond-buying worth €20 billion per month, starting from November.

Those decisions were dubious and triggered critique from various members of the Frankfurt-based organization. General concerns that arose after ECB’s dovish policy was, did the European Central Bank acted too early? Will ECB proceed with its expansionary monetary policy, or is contractionary policy set to kickback?

Well, these policy minutes may unveil further about the forward guidance.

The Bureau of Labor Statistics is due to report a change in the price of goods and services purchased by consumers.

US consumer prices are rising in the world’s biggest market after a long span of weaker inflation. Whereas the Consumer Price Index (CPI) grew by a moderate 0.1% in August, Core CPI improved by 0.3% — shifting the yearly gain to 2.4%. The economic figures for September are crucial for the following Fed rate decision. 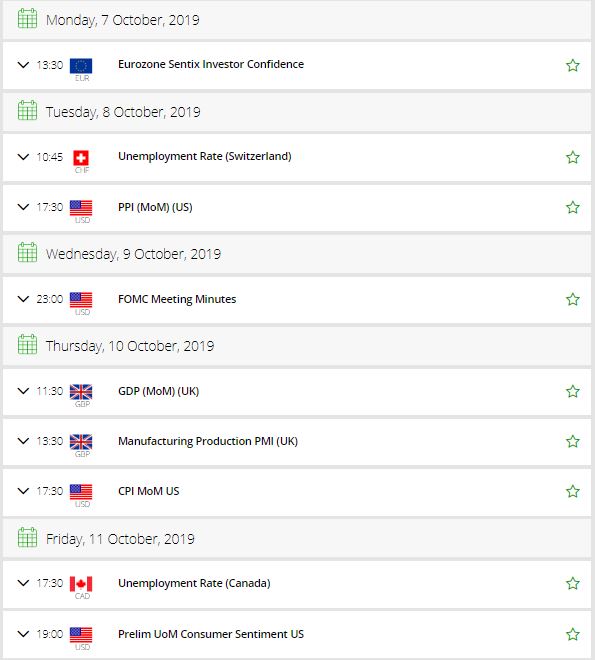 US Dollar Expected to Trade Weak For The Next Three Months: Reuters Poll
10 hours ago