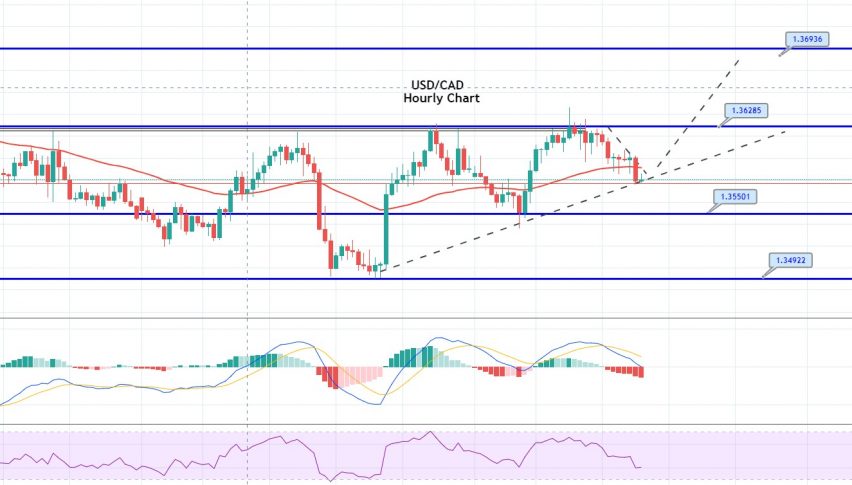 The USD/CAD pair closed at 1.36145, after placing a high of 1.36460 and a low of 1.35917. Overall, the movement of the USD/CAD pair remained slightly bullish throughout the day. The USD/CAD pair followed the previous day’s trend, extending its gains and reaching the highest level in 10 days, on the back of better-than-expected US inflation data.

The US inflation data provided good news, as the figures for June rebounded attractively. The headline figure gained 0.6%, while the core reading improved by 0.2%. Both indicators rose for the first time after three consecutive declines. Inflation levels reflect economic activity, which suggests that the June figures are showing signs of recovery for the US economy.

At 17:30 GMT, the CPI came in at 0.6%, against the expected 0.5%, providing support for the US dollar. For June, the Core CPI rose to 0.2%, from the expected 0.1%, supporting the US dollar, which in turn helped the USD/CAD pair to post gains and rise close to the highest level in two weeks on Tuesday. The NFIB Small Business Index also added to Tuesday’s upward movement of the USD/CAD pair. The index reached 100.6 against the forecast 97.5, lending support to the US dollar.

On the crude oil front, the WTI crude oil prices rose on Tuesday, despite the renewed lockdown restrictions from some countries worldwide. The American Petroleum Institute estimated a huge draw in crude oil inventories of 8.322 M barrels for the week ending July 10. This report gave the crude oil prices a push, to near the $40.54 level. The increased and better crude oil prices gave strength to the commodity-linked Loonie, which ultimately capped the additional gains in the USD/CAD pair.

At its monetary policy meeting on Wednesday, the Bank of Canada will set the overnight rate, which is expected to remain unchanged at 0.25%, where it has remained since March. Investors will focus on the interest rate statement and the tone of the report, which will affect the USD/CAD pair.

The Canadian economy has been showing signs of improvement, after a 11.2% drop in the GDP in April. This was reflected in recent economic data relating to job creation numbers etc. If upcoming releases continue to come in positive, the Canadian dollar will gain against the US dollar and vice versa.

The USD/CAD is trading with a bearish bias at the 1.3590 level, testing a support level of 1.3590. it closed recently on a bearish engulfing candle, which suggests that there are still odds of a continuation of the bearish trend, and if that happens, the pair could drop to the 1.3550 level. Below this, the next support level is expected to go after the 1.3490 level. Let’s look for selling trades below the 1.3620 level today. Good luck!