Daily Brief, Aug 04 – Everything You Need to Know About Gold Today!   - Forex News by FX Leaders 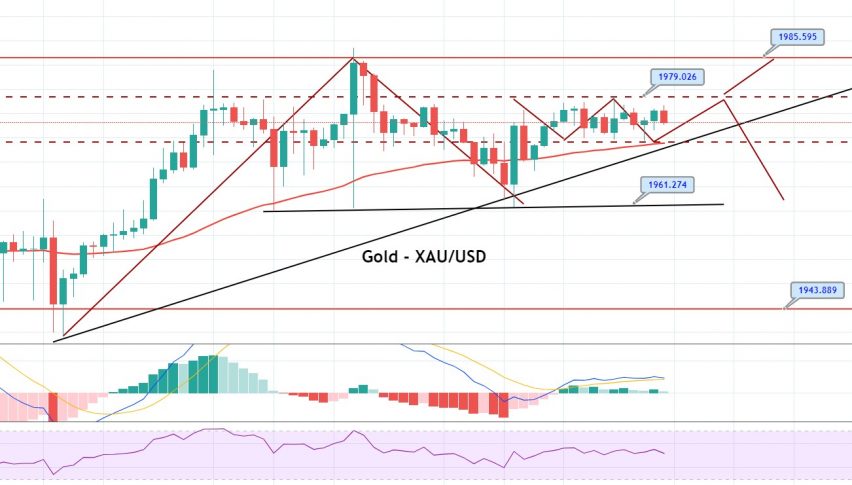 Daily Brief, Aug 04 – Everything You Need to Know About Gold Today!

The precious metal GOLD prices were closed at 1976.51 after placing a high of 1988.67 and a low of 1959.94. Overall the movement of gold remained slightly bullish throughout the day. Gold prices retreated from a record high of 1988 level on Monday after the dollar gained strength, and investors booked some profits. The investors’ focus has shifted towards the proposals for new US coronavirus package to extend relief benefits to jobless Americans.

The US lawmakers are struggling to reach out to a consensus for US coronavirus aid legislation. The Republicans want the package not to exceed more than $ 1 trillion while Democrats want to offer a $3 trillion package. The difference between both parties has caused a delay in the US aid package’s announcement, and investors are keenly awaiting it.

Investors believe that gold prices could reach a $2000 level, but the strength of dollars due to profit-taking has caused a pause in a surge of gold prices. It seems like traders are waiting to see what the US Congress does with the relief package.

The Construction Spending for June’s month came in as -0.7% against the forecasted 1.0% and weighed on the US dollar that helped Gold prices move upward further. The ISM Manufacturing Prices for July also rose to 53.2 points from the expected 52.2 and supported the US dollar.

In short, the macroeconomic data from the US came in mixed on Monday and gave mixed signals to investors. The Dollar Index was up 0.5% against its rivals and kept a check on rising gold prices.

On coronavirus front, the cases from around the globe have topped 18 million so far, and major cities have announced fresh restrictions to curb the infection spread. The safe-haven appeal was bolstered after the countries started to impose restrictions once again, and the fears of economic fallout increased. The rising safe-haven appeal favored gold prices on Tuesday.

On Sunday, the White House coronavirus expert said that the US was in a new phase of the outbreak with infections extraordinarily widespread in rural areas as well as in cities. On the vaccine front, Russian health authorities were preparing to start a mass vaccination campaign against the coronavirus in October. Russian media quoted that doctors and teachers would be first to receive the vaccine.

In response to this, the US Dr. Anthony Fauci said that he hoped that Russia and China were testing the vaccine before administering them to anyone. He said that the US should have a safe and effective vaccine by the end of the year, and there will be no vaccine so far ahead of the US that the US will have to depend on other countries to get the vaccine.

The vaccine development race between Russia, China, and the US and the UK has given some hope to the traders that soon, a vaccine will be developed, and the chaos of coronavirus will be over. This has dusted off some of the market’s fears and uncertainty and has kept a check on gold gains on Monday.

On the US-China front, the US administration and Trump were looking to ban the Chinese TikTok app in the United States over national security concerns. However, tech giant Microsoft confirmed on late Sunday that it held talks with ByteDance to acquire TikTok’s US operations. Both companies will have a potential deal of Microsoft buying TikTok in the US, Canada, Australia, and New Zealand.

Although President Trump did not support the spinoff deal involving Microsoft, he still gave both companies 45 days to negotiate a deal.

Some people believe that the reason behind banning TikTok was not a national security concern but was propaganda more than that because data of 15-year old who dance around could not have national security implications. Trump’s administration wanted to push back on China’s rise as a tech competitor to the United States. The decision is pending regarding the ban of TikTok, and traders are awaiting the final decision to impact the ongoing tension between the US & China that would ultimately affect the financial market.

The technical side of GOLD hasn’t changed a lot as it’s prices continue to trade at $1,975. Gold may find immediate support at 1,970 level now, and bearish crossover below this level can lead its prices towards 1,963 mark. While an immediate resistance stays at 1,981 and above this, 1,989 will be extending major resistance. Bullish bias seems dominant above 1,963 level. Good luck!